What is Laravel Sanctum?

Laravel Sanctum is a simple way for authenticating Single Page Applications (SPAs), Mobile Applications, and simple token-based APIs. It allows users to create multiple API tokens which they can use to access your application. The token themselves can have scopes that can be used to limit what can and cannot be accessed using the generated token.

In this article, I am going to show you how to implement API authentication using Laravel Sanctum in your application.

How does Laravel Sanctum Work?

Laravel Sanctum is a simple package that is used to issue API tokens to users without the complication of OAuth. These tokens have a long expiration time but can be revoked at any time manually.

These Tokens are then stored in a single database table and can be authenticated by having them attached to the Authorization header.

This allows us to issue tokens from our server directly to our client/frontend applications.

To install the package, we can use the following command

The next step is to publish the Sanctum configurations and the migration files using the vendor:publish command.

We can then run the database migrations. These migrations create a table that stores the API tokens that are created.

Once the configurations are done, we can now start authentication. The first step is to issue API tokens. These tokens are used to authenticate API requests to the application. The token must be included in the Authorization Header as a Bearer Token. The header should be presented as follows:

In this case, the is the generated API token that is used to identify the user/client making the request.

To issue tokens for users, we first need to use the Laravel\Sanctum\HasApiTokens trait in our User model. 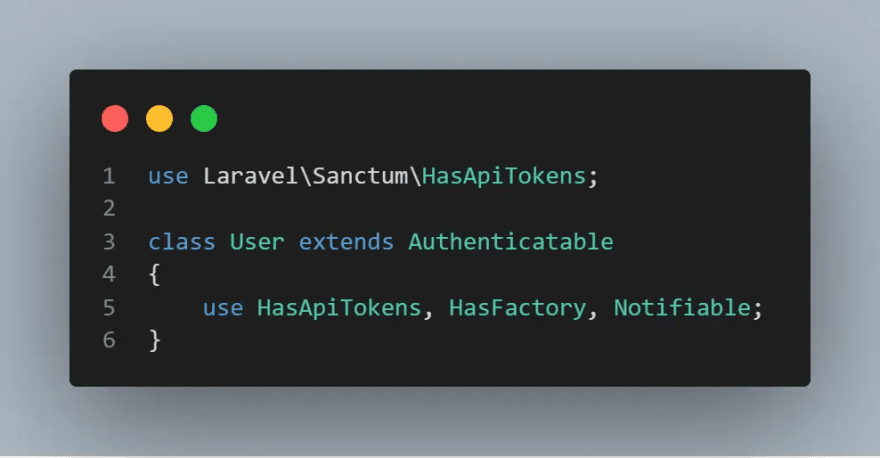 To issue a token, we can use the createToken method. This token can be issued once the user authentication has succeeded. For example, when a user provides their email/username and password during login , we can issue a token immediately after the authentication process is successful. 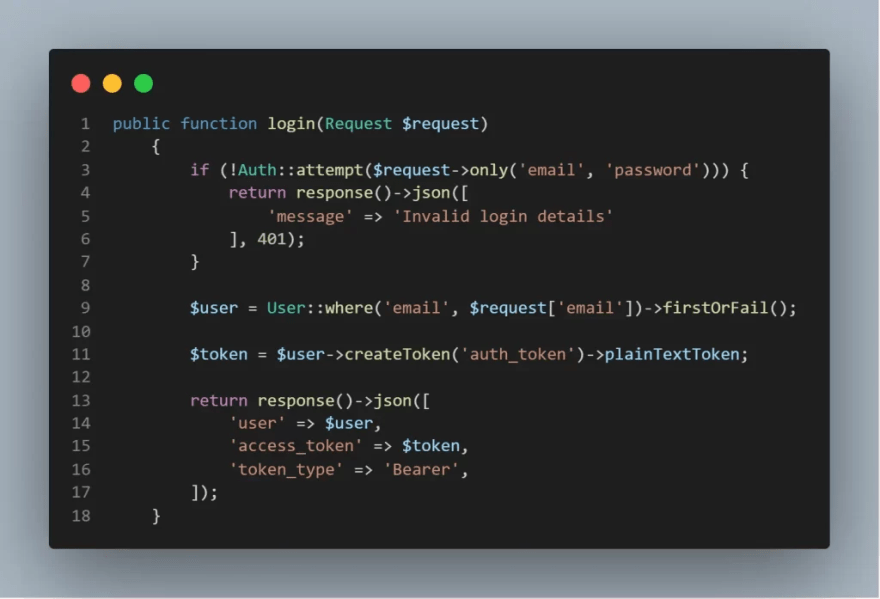 We can also issue a token immediately after a user has been registered to our system. 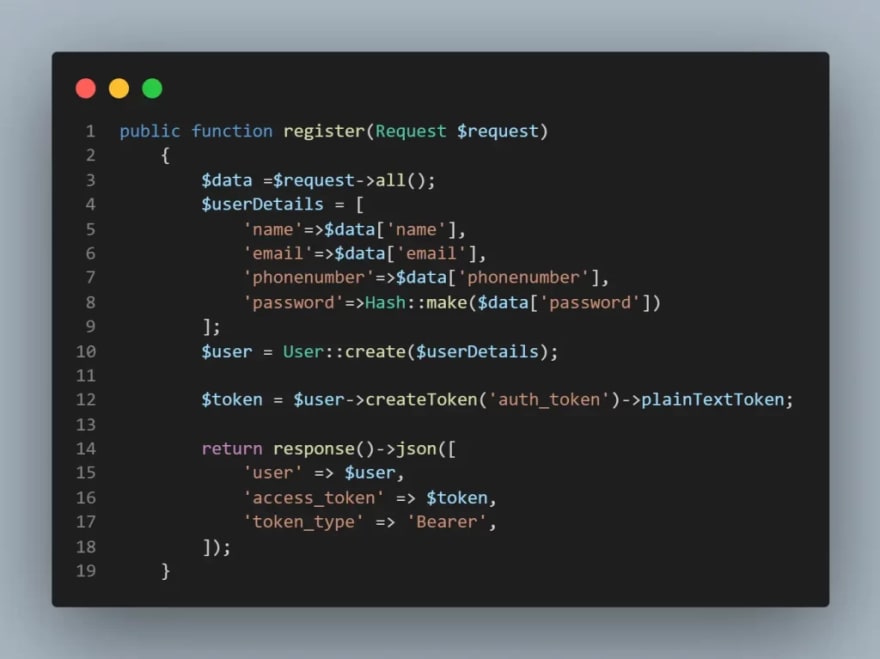 To logout a user, we can revoke an API Token and render it invalid. To do so, we have to make an API request to the logout endpoint which implements the delete() method. We have to attach the token to the header of the request in order to revoke the token and hence log out a user.

The only way to protect routes so that all the incoming requests are authenticated is by attaching the sanctum authentication guard to our API routes within the routes/api.php file. This can be done by adding an auth:sanctum middleware to the routes that require protection. In our example, the logout route requires the middleware because we want it to be only accessible if a user is signed in.

In this example, I have created a route group that will contain all the routes that need the auth:sanctum middleware

Laravel Sanctum provides an easy and simple way of implementing API authentication for your frontend application. It is lightweight and thus easy to use and ship to production. This is because it does not use encryption keys to authenticate and thus has less infrastructure when shipping to production. I hope this article was able to show you how to implement simple authentication using Laravel Sanctum. If you have any questions, feel free to ask them in the comment section and thank you for reading.

A guide to getting unstuck as a developer

Ian Kumu
I build cool things for the web. I also enjoy reading about new technologies and am always looking for opportunities to learn. I am currently a backend developer and I love sharing my knowledge
Laravel Mail: How to Send Emails Easily in Laravel
#laravel #webdev #php #emails
Laravel File Upload: A Complete Tutorial and Guide
#laravel #php #beginners #webdev
NGINX vs Apache: Choosing The Best Web Server in 2022
#linux #nginx #apache #webdev

Once suspended, iankumu will not be able to comment or publish posts until their suspension is removed.

Once unsuspended, iankumu will be able to comment and publish posts again.

Once unpublished, all posts by iankumu will become hidden and only accessible to themselves.

If iankumu is not suspended, they can still re-publish their posts from their dashboard.

Once unpublished, this post will become invisible to the public and only accessible to Ian Kumu.

Thanks for keeping DEV Community 👩‍💻👨‍💻 safe. Here is what you can do to flag iankumu:

Unflagging iankumu will restore default visibility to their posts.