NOTE 1: This is a "repost" of a Gist made from my notes around the summer of 2019, while I was learning Ray Marching. It is then quite basic content, and can even have mistakes. For more accurate and in depth content about raymarching, I highly recommend Iñigo Quilez's blog.

NOTE 2: all of this content has been made following Sebastian Lague's fantastic explanation, so, go to his channel and give him some love ❤️

Ray marching is a rendering technique based on calculating the distance to the scene's surfaces.

Essentially, it consist in, starting from the camera's PoV, and going through each pixel, advancing blindly in safe-sized steps until we reach to a surface, and then getting the color of that point.

To determine what is a safe distance to advance, we need to know, how much we can move in the current direction without crashing with anything. That will be the smallest distance to any surface in the scene.

If, after advancing we haven't reached yet any surface, we repeat the process until we do or we get too far.

The following image exemplifies it in 2D: 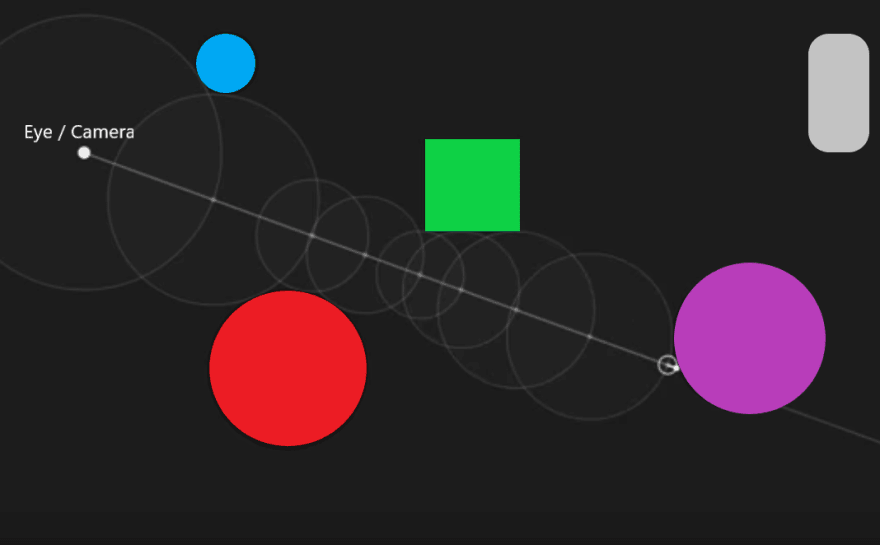 So, the first problem is how to calculate the distance to the objects/surfaces in the scene.

Luckily for us, there are many shapes and primitives that can be easily defined with mathematical functions.

I have no idea about this, so I will refer you to Iñigo Quilez's web, where you can find a detailed list with a lot of them.

The great thing about these functions is that they don't only give us the distance to the surface, but also tell us if we are iside it (negative distance). This will come handy later to make some cool effects.

These are important, because we won't be using 3D models, and we need a way to let the shader know what it's drawing.

Ok, so now we have the context and we are ready to begin.

For this project we will need:

The loop that the camera script (RaymarchingManager.cs in my repo) follows for each frame is quite simple and boring. It only sets up everything and displays the output:

Well, this is the fun part! Here is where the real ray marching will be done.

Since this is a compute shader, it will be doing the same algorythm symultaneously for each pixel in the final image, so we will think about it in the terms of a single pixel.

1. Get the Pixel Coordinates

First, we nee to know the position of the pixel we are working with. This is quite simple, following the next formula:

2. Get the ray direction and origin

With the pixel coordinates, it is super easy to get the direction of the ray connecting the camera's PoV with it.

3. The Real Ray Marching Loop
Now, with the ray defined, we can start with the ray marching itself.
The loop goes as follows: 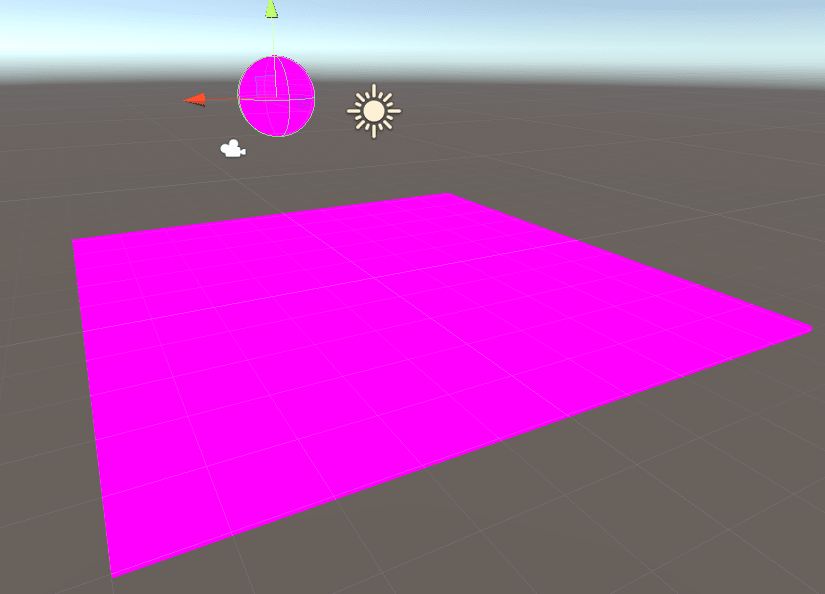 And that are the basics! 😄

As you can see, it is not very pretty to say it slightly. So we'll need to do some lighting.

So you want something with more... everything than just plain color?

Ok, let's put some light into this.

So, first of all, we must pass the light/s data (position, color, type, etc) to the shader.

We can do it just like we passed all the needed uniforms before. No-brainer.

Now you'd be asking "But wait Javi, you handsome psycho, to illuminate a 3D object we need the vertices' normals, and we don't have them. We don't even have vertices!"

To wich I would respond "You are absolutely right, you beautiful genius! But we are not doing normal rendering, we are doing RAY MARCHING! So we'll need to calculate them."

This is probably the part that I took most time to wrap my head around, but, once you get it, it is quite easy to understand, so stay with me.

For the shake of simpicity, I'll ignore the 3D and explain it as in a 2D curve/polygon.

Imagine we have a curve/polygon in 2D. To know its normal in the vertical axis in a point, we will take two points in space reeeeaally close to it by moving by a reeeeaally small amount in the horizontal axis, right and left.

Now, we have a gorgeous function that gives us the distance to the nearest function, so we'll use it with the 2 new points.

If the surface has not changed in the vertical axis between those points, the distances obtained will be equal, and it will mean that the surface is flat and its normal is 100% vertical.

If they differ, it means the surface is oriented in another direction, and we can approximate the vertical component of its normal just by substracting the distances.

Now we repeat the same process for the horizontal axis, and normalize the resulting vector, and we have the normal of the surface in that poitn! It's that simple! 😄

Here we can go as complex as we want, but I just went with a really basic diffuse lighting. (I'll probably at least add Phong, but for now, it stays like this).

To do something as basic as mine, you'll just need to multiply the shape's color by the dot product of the normal and the direction to the light.

To check if the current point is in shadow, we will just do another ray marching loop, this time towards the light, and return the shadow color if we collide with something, and 1 if not.

Then, just multiply it by the output color, and we are done!

Now, the ray marching is known for the cool and weird effects it can do when shapes get too close to one another.

This is what we defined in the blend type of the shapes, and its applied when returning the distance to the nearest shape, if we don't get exactly the nearest.

I have used 4 different possible effects or blending operations:

Learning From Unity After 15 Years of GameDev with Custom Engines

How to Embed Video Chat in your Unity Games

Javier Salcedo
Being able to create almost anything with what essentially is just an arbitrary arrangement of words is the closer I’ll get to real world magic, and that is why I love programming.
16 Libraries You Should Know as a React Developer 💯🔥
#webdev #coding #react #productivity
Meme Monday 🦊
#jokes #discuss #watercooler
Why "Do Your Own Research" is terrible advice
#career #money #healthydebate

Once suspended, javiersalcedopuyo will not be able to comment or publish posts until their suspension is removed.

Once unsuspended, javiersalcedopuyo will be able to comment and publish posts again.

Once unpublished, all posts by javiersalcedopuyo will become hidden and only accessible to themselves.

If javiersalcedopuyo is not suspended, they can still re-publish their posts from their dashboard.

Once unpublished, this post will become invisible to the public and only accessible to Javier Salcedo.

Thanks for keeping DEV Community 👩‍💻👨‍💻 safe. Here is what you can do to flag javiersalcedopuyo:

Unflagging javiersalcedopuyo will restore default visibility to their posts.