Overfitting is a common challenge to overcome while training machine learning models. 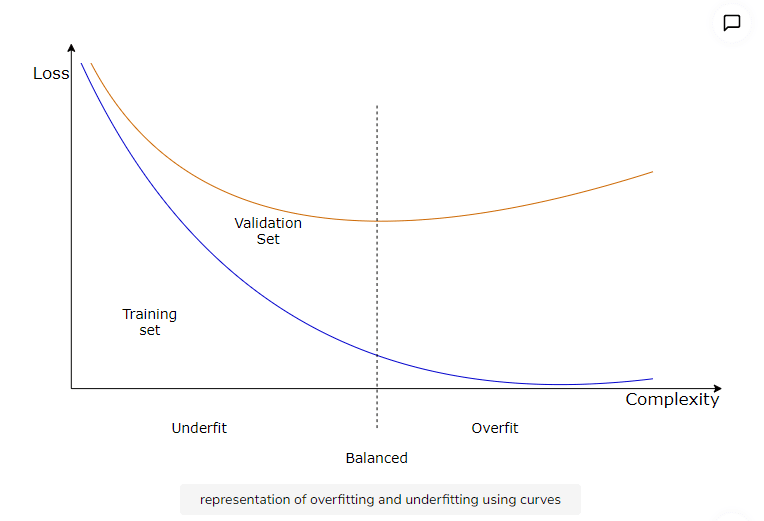 As the complexity of the model increases, the loss decreases, and vice versa.

The point from which the loss increases is the minimal loss for the validation set.

Before this point, a model is considered under-fitted, and after this point, the model is deemed to be over-fitted. This level of complexity represents the balanced model.

To better understand the balanced model, let’s consider some data points to represent these three fittings. 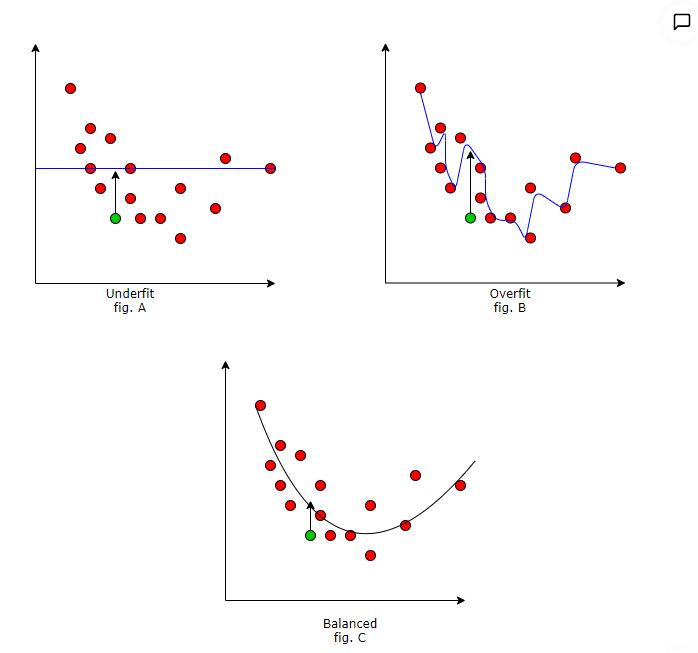 In the diagrams above, the red data points are the ones we use to train the model. This means they were already available.

The green data point is newly introduced, and we test it against our model.

If the green data point is introduced in the balanced machine learning model, it will be close to the plotted line, indicating greater accuracy.

In Fig. A, our ML model has plotted a straight line against the data points. The line crosses through a few data points, and other data points are further from the plotted line.

When a new data point is introduced, it is far from the line. This indicates that the model is not accurate.

The model is fitted exceptionally well, as seen in Fig. B because the plotted line passes through all the training data points.

This model is entirely accurate for the training data. However, introducing a new data point shows that the model may not work well for new data, as it is far away from the plotted line.

In Fig. C, which is our balanced model, the plotted curve passes through some of the data points. If we calculate the loss, this model would have the most minor loss out of all the models.

The introduction of a new point is near the plotted curve. Hence, when the model is used with actual/production data, our predictions will be reasonably accurate.

That's all for this post guys,
If you enjoyed it, don't forget to leave a like.
Happy Learning.

Teaching Cars to Drive with Neuroevolution, Tensorflow, and 500 lines of Javascript

Once suspended, kedark will not be able to comment or publish posts until their suspension is removed.

Once unsuspended, kedark will be able to comment and publish posts again.

Once unpublished, all posts by kedark will become hidden and only accessible to themselves.

If kedark is not suspended, they can still re-publish their posts from their dashboard.

Once unpublished, this post will become invisible to the public and only accessible to Kedar.K.

Thanks for keeping DEV Community 👩‍💻👨‍💻 safe. Here is what you can do to flag kedark:

Unflagging kedark will restore default visibility to their posts.