In version 1.7.8 of the PrestaShop returns the ability to collect more precise information about the modules that are displayed on the front office of your store.

Enabling the PrestaShop front office profiler is a great place to start if you need to know more about the performance of your PrestaShop.

The data is collected both for hooks and modules attached to them, but also for widgets. If you don't have PrestaShop 1.7.8, don't worry. The profiler in the new version is very easy to use also with older versions of PrestaShop. In this post I will show you how to use it in the older versions.

Using the profiler from 1.7.8 in lower versions of PrestaShop

To use profiler in lower versions of PrestaShop, only 4 steps are needed.

The last step you need to do, is to edit the controllers/admin/AdminLegacyLayoutController.php file and delete:

from the end of the display method.

Now if you set _PS_DEBUG_PROFILING_ to true in the config/defines.inc.php, you can use a better version of the profiler in your PrestaShop store.

All this should give you more information about the health of your front office. You can expect more features available in the front office profiler in the next major version of PrestaShop. 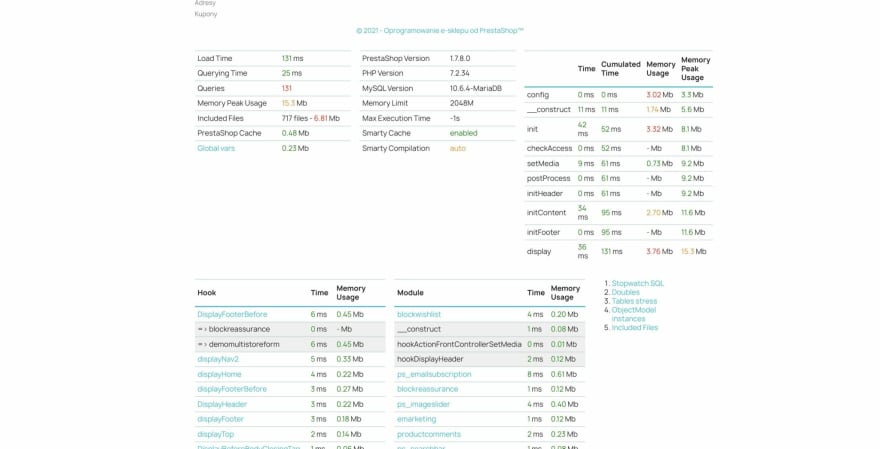 Scilab: A Beginner's Guide to Basic Commands I

Once suspended, kpodemski will not be able to comment or publish posts until their suspension is removed.

Once unsuspended, kpodemski will be able to comment and publish posts again.

Once unpublished, all posts by kpodemski will become hidden and only accessible to themselves.

If kpodemski is not suspended, they can still re-publish their posts from their dashboard.

Once unpublished, this post will become invisible to the public and only accessible to Krystian Podemski.

Thanks for keeping DEV Community 👩‍💻👨‍💻 safe. Here is what you can do to flag kpodemski:

Unflagging kpodemski will restore default visibility to their posts.