There is a high chance you were once so upset at your IDE for not having a feature you need, that you thought of writing a plugin for it. Most of us end up never doing it and finishing the job without the said plugin. The same happened to me.
I had an idea for a PHPStorm plugin for months but never finding time to write it. Until I had to do the same boring routine one too many times.
So I wrote a PHPStorm plugin.

When you have a class that has getters and setters in some (rare) cases you will need to write something like this:

With some auto-complete features that InteliJ platform provides I can finish this pretty quickly. But what if a class has a dozen of getters or setters you need to call?

The idea was simple a developer places the caret on the $car variable and by pressing a shortcut, generate all the getters or setters (depending on the shortcut) for the given object.

I was really nervous cause I haven't touched java since my school days but I made a decision to just do it.

I've followed a setup written by the people at Jetbrains, Setting-up environment for PhpStorm plugin development. If you are going to follow this setup make sure that when you are configuring the SDK you add php-openapi.jar and php.jar like so 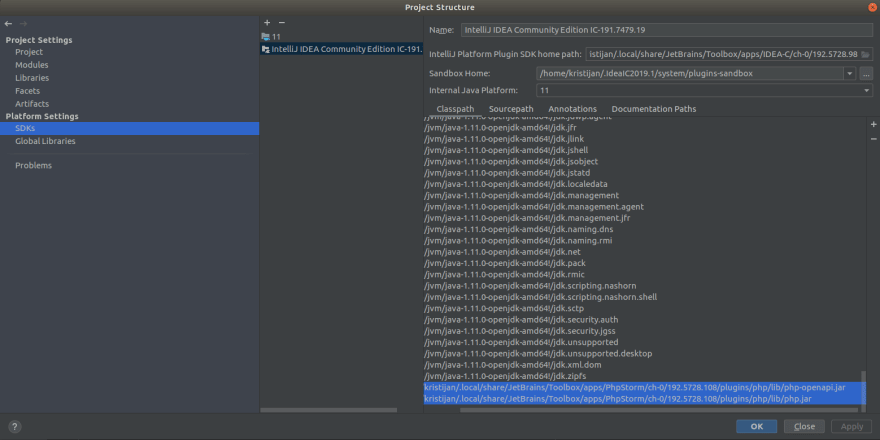 don't make the same mistake as me by not seeing the warning to not set those in Libraries.

By default InteliJ will setup and run another instance of InteliJ when you click on the debug button. It works really good, but I was developing a plugin for PHPStorm, not for InteliJ. I've searched far and wide for a debugger setup if you are developing a PHPStorm plugin and I couldn't find any. So I had to discover how to do it on my own.
You can go to the edit debug configurations like so

in the JRE field navigate to the path of your PHPStorm and voila, now it works. Easier than I thought it would be.

I must say I found it hard to do anything, documentation is pretty scarce and I forgot a lot of java rules and syntax.
Unfortunately I couldn't find a way to tap in the power of PHPStorm and to ask it; what it knows about a certain variable. The only choice I had left is to use PSI and try to figure out where is the declaration of the variable and what type it is. After a few hours of trial and error I have succeeded in that.

Believe me, I'm not proud of this code and I am looking forward to rewriting it soon.

Now the only thing left was to get the getters and setters of the instantiated class and add the calls to the editor. I managed to get the methods of a class without any issues. I expected the writing to the editor to be the easiest task of them all and boy was I wrong. Again I had to spend a few hours to figure out how to do it and this is the best I could come up with

In the end I got a very limited plugin that can generate setters or getters only for the variables instantiated in the same file. It can't determine variable type from a function return or more advanced stuff like that. Having said that I'm still very happy how it turned out and I'm planning to make it more powerful in the future and add more features to the plugin.

If you want to see more of the plugin feel free to visit the GitHub repository.

PhpStorm plugin that let's you generate even more PHP code

PhpStorm plugin that lets you generate even more PHP code.