Creating a custom-built React boilerplate can speed up initial development and help teams of developers collaborate more efficiently. While it required more time up-front to build the boilerplate, it's saving our teams tons of time in the long run.

This case study powerfully demonstrates the importance of laying a common foundation for collaborative coding.

Keep reading to learn how they built the boilerplate and what we've seen as a result of using this new tool. 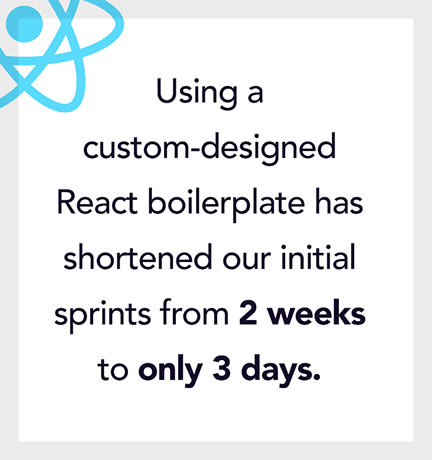 Ryan Ostrom and Eddie Rozum, two all-star developers at Praxent, put their heads together to create a boilerplate for use by all teams and developers working on React projects within our organization. The custom-built boilerplate accomplishes the following goals:

What's Inside the React Boilerplate

Developers no longer have to create a build process from scratch. Instead, when beginning a new React project, they simply make a few adjustments before they’re ready to start developing.

Here are the customizations each developer has to make to the build process once they've accessed the boilerplate:

Eddie and Ryan created this tool to facilitate better collaboration among multiple developers working on different projects within our organization.

They wanted to create a tool that would allow any new developer added to a React project to quickly catch on and make it easier for senior developers to understand the layout of a project when reviewing code.

The opinionated boilerplate includes built-in structure for implementing automated testing. It has automatic code splitting built into the tool. (Code splitting allows developers to access only the JavaScript they need at any given moment, rather than pulling chunks of related JavaScript which they must manually sift and separate.)

Here is the technology stack used for this React boilerplate:

Learn more about the custom React boilerplate created by Eddie Rozum and Ryan Ostrom: "How to Speed up Development on React Projects | React Boilerplate"

React Tricks Miniseries 7: How to setState for different data types

Elisabeth at Praxent
I write about digital product design and development for Praxent, a custom software company in Austin. "Best Companies to Work for in Texas" 3 years in a row!
Why Immer.js Is an Excellent Choice for Reinforcing Immutability in React
#javascript #react #immutability #webdev
10 Ways to Become a Better Developer
#career #teamwork #coding #cleancode