Continuing from the last post, we'll look at how to set up a built-in SSH server starting with Windows 10 and Windows Server 1709. This method allows Windows Server to connect remotely using SSH, just like a traditional Linux server. We will also look at how you can use Remote Desktop securely without modifying your firewall settings using SSH port tunneling.

You can install OpenSSH Server the same way you installed the SSH client in the previous article.

After installing the OpenSSH server program, start and stop the NT service once to create the necessary initial configuration files.

For the following items, uncomment the items and apply the value as follows:

Then choose your preferred method of managing SSH public keys. Starting with Windows Server 2019 (or 1809), there are two ways to describe SSH public keys. One of which is the traditional way of creating an authorized_keys file in the user's home directory.

To use this method, comment out the following block of code at the bottom of the configuration file:

Then go to the user home directory you want to log in to and create a .ssh directory.

Create an authorized_keys file (without the extension) inside the newly created directory and open it with your favorite text editor.

Add the SSH public key value you are using here.

When you save the file, you must change the file permission settings as described in the section Setting File Permissions with Authentication Key Information. If this setting is missing, the SSH connection will fail.

This is the default used by OpenSSH included in Windows Server 2019 (1809). Instead of registering a new SSH key for each user, you can manage your files in one place.

If you use this method, all public keys must be stored in the $env: PROGRAMDATA\ssh\administrators_authorized_keys file, except for non-administrative users (that is, users who do not belong to the Administrators group). If you try, this setting will be used instead of the setting in your home directory, so if there is no key here, the connection will fail.

The administrators_authorized_keys file does not exist by default and must be created.

Add the SSH public key value you are using here.

When you save the file, you must change the file permission settings as described in the section Setting File Permissions with Authentication Key Information. If this setting is missing, the SSH connection will fail.

A common and very tough problem that you will face about using the OpenSSH server for Windows is this. SSH key file permission should have correct and limited file permission. Windows version of SSH also follows this rule, but especially in Windows, configuring file permission can be unintuitive.

Depending on the method you chose in the previous step, you must verify the path of the authorized_keys file or administrators_authorized_keys file and change the permissions so that only the system account can access it using the icacls.exe utility and the Get-Acl and Set-Acl commands.

Basically, for compatibility reasons, the Windows operating system has provided a shell-based interpreter that recognizes DOS commands for a long time. But now, with more and more features than working with DOS commands, PowerShell is becoming a good alternative.

If necessary, you can specify that PowerShell as the default shell for SSH instead of the DOS interpreter. However, the settings here are specific to SSH sessions, not for the Remote Desktop or console session.

You are now ready to start your SSH server. The SSH server is set to manual run by default, so you can change the startup mode to automatic. Then starts the service. 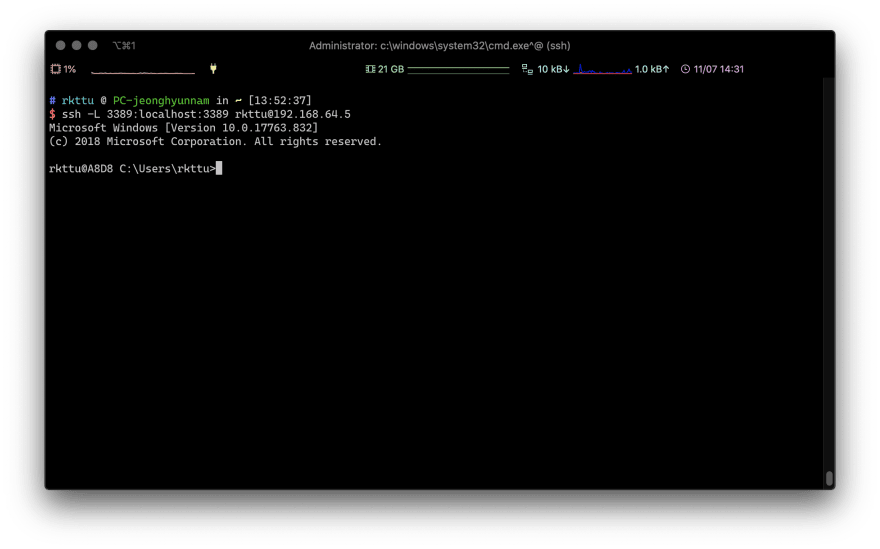 Congratulations! From now, you can connect to Windows with SSH-key authentication.

How to Secure Remote Desktops

Unlike Linux, Windows still runs much of the system on a graphical interface rather than on the command line. So if you try to do something with a terminal like this, you may not have much to do as you might expect.

Remote Desktop, however, is a well-known food for many hackers and script kiddies as is well known. You may encounter the dilemma of choosing between convenience and security.

Fortunately, SSH provides the concept of tunneling, supporting the ability to relay other network connections securely. Remote desktop connections can also be protected in this way so that you can use them with confidence.

Start by blocking the TCP 3389 and UDP 3389 ports. You can do this because you will use Remote Desktop only with SSH tunneling.

Next, you must change the registry flag value so that the remote desktop server can accept the connection.

And the part that I'm going to explain right now is really cool. As you saw earlier, you will not be asked for your password when you connect to OpenSSH, so you can set up a randomly generated strong password each time you use it. It is very useful to have a simple script in the system directory that can do this.

Choose the type of script you want to create a file called ChangePassword.ps1. We will keep the file in the system directory for your convenience.

Create the contents of the ChangePassword.ps1 file as follows:

This script allows you to enter your own password. However, unless you change the policy, you can only use passwords that pass the Windows Server enhanced default password rules. You must specify a password that must meet all of the following conditions.

Create the contents of the ChangePassword.ps1 file as follows:

This way, you can set a strong password every time. If you forget your password, you can rest assured that you can still use public key authentication as a secondary means of authentication.

Try logging in to Remote Desktop with Tunneling

Now enter the following command to run the above script. After that, just set the password as guided by the script and verify that the remote desktop connection is working.

To log in to the remote desktop, run SSH as follows: 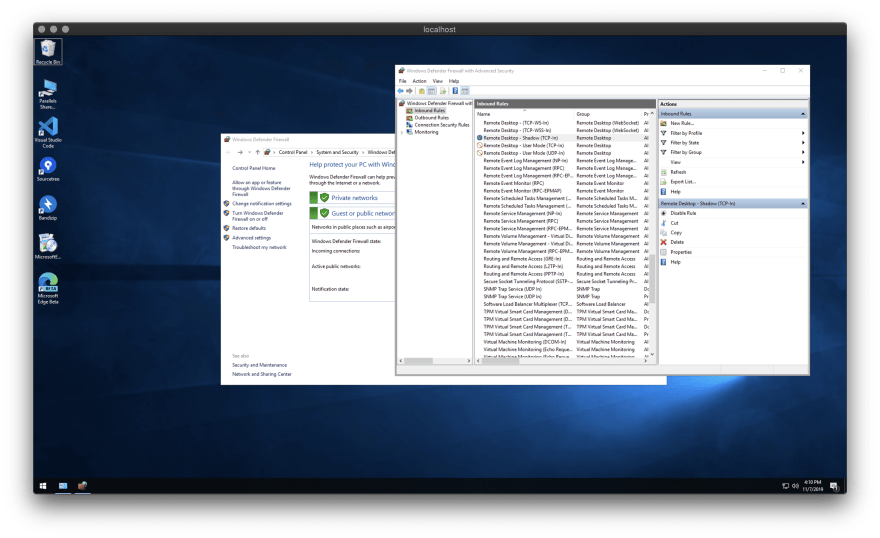 If you try to connect to a remote desktop using only the <host_address> part as before, the firewall will block the connection as previously set up. So no one can access the remote desktop directly unless the user has registered a public key that matches the SSH secret key with that server.

Not surprisingly, it is possible to use SSH based SFTP. This feature can be used to securely handle large file transfers in place of the remote desktop's folder sharing feature. 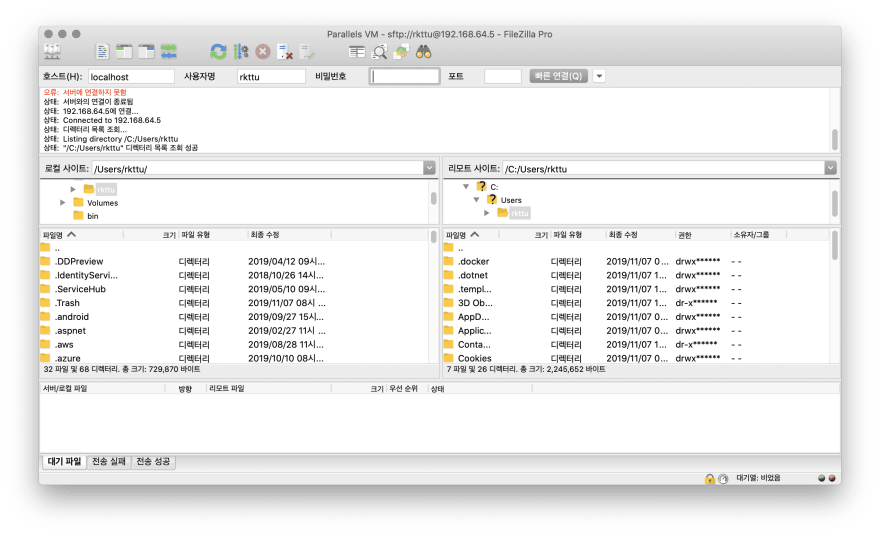 Any client that supports the SFTP feature, such as FileZilla, is compatible and has an management advantage, as there is no need to apply complex firewall open policies like traditional FTP.

This walks you through all the new SSH features that have been added since Windows 10 1709. Both articles are available for Windows 10 and Windows Server 2019, so please take a moment to set them up for even more security.

The following articles helped me as I wrote this article.

How to code your app using the CodeSandbox iPad IDE

Jeong Hyun Nam
Microsoft Azure MVP
Who or what are you grateful for in tech?
#discuss
The Future Of Software Engineering: Is Low-Code The Answer? [Infographic]
#programming #webdev #lowcode #productivity
Meme... Tuesday? 🤔
#jokes #discuss #watercooler

Once suspended, rkttu will not be able to comment or publish posts until their suspension is removed.

Once unsuspended, rkttu will be able to comment and publish posts again.

Once unpublished, all posts by rkttu will become hidden and only accessible to themselves.

If rkttu is not suspended, they can still re-publish their posts from their dashboard.

Once unpublished, this post will become invisible to the public and only accessible to Jeong Hyun Nam.

Thanks for keeping DEV Community 👩‍💻👨‍💻 safe. Here is what you can do to flag rkttu:

Unflagging rkttu will restore default visibility to their posts.