I think that for a big percentage of cases, ETL pipelines are a solved problem. Unless you have very special needs, there are many tools in the market that can remove the hassle of setting up irrelevant minutia, and let you focus on the business logic instead, because anyone can create a function that connects to a Rabbit MQ exchange, but only you can work on the task of how your business logic should handle the received messages. However, I am aware of the value that "reinventing the wheel" might have in some business aspects, when the off the shelf tools won't cut it. But in the event that off the shelf tools are good for you, let me introduce you to Benthos.

Benthos it's a tool that can perform streaming ETL tasks, so to speak, it can grab your stream source (Extract), apply some transformations (Transform) and send it to your desired sink/destination (Load). It's written in Go, and sorry for the clickbait title, sure it has a lot of Golang lines of code! But the whole point of this exercise is that it doesn't require you to write any in order to set your pipelines. It uses a yaml config file which is executed by the main binary.

Benthos handles for you some boring stuff such as parallelism, or creation of metrics in Prometheus, Influx, Cloudwatch, etc.. We are going to see how it behaves with the following task:

Do a docker-compose up -d and let it start as long as needed, Rabbit is notoriously slow starting off. In the meantime let's create our Benthos pipeline.

You might have seen how in the previous docker compose file we mounted ./pipeline:/pipeline in the Benthos image. This is just because that's where I am going to store my pipeline file. Feel free to mount a different directory if you need.

So here are the contents of pipeline/benthos.yml

The input and output sections are self explanatory, they just define the configuration of the brokers we are using. The middle section (pipeline) is a bit more involved, because it requires the usage of the custom Benthos components to manipulate messages. See all the available processors here

In my case, I am using the bloblang processor. You can see the details here. I am getting the input messages and applying a manipulation to their payload.

So that's it, that's the pipeline. I understand this is a toy example, but if you look at the documentation you can see how Benthos seems to be ready to tackle pretty serious cases.

Let's start with Rabbit. I didn't really add a custom json configuration to this docker compose stack, so there are no custom queues when initializing. We can simply go to http://0.0.0.0:15672/#/queues and create one (in my example, it's called ruben, as you can see in the benthos.yml file) 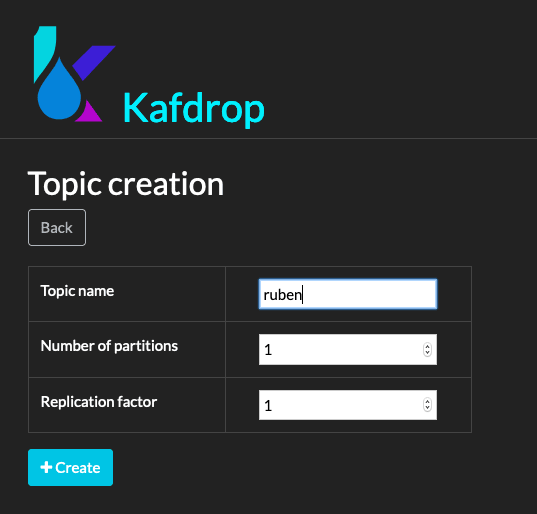 Now we can now run Benthos with our config file:

If everything goes well, Benthos will start listening. Now,
send a message (or as many as you want) via the Rabbit interface. Remember that your processor in Benthos is now ready to handle json objects.

Go to the Kafdrop interface and observe your messages arriving. Indeed, you have the original message, plus the two extra attributes that we have defined in our pipeline.

While perhaps it doesn't match everyone's use case, Benthos looks like a pretty nice and easy to use alternative to create ETL pipelines in the Golang universe.

The entirety of the code is in this article, but if you need it to be in a GitHub repo, here it is https://github.com/rubenwap/poc-benthos