I've begun working more with Svelte and TypeScript and I ... Well, I think I might be in love.

I think you will be, too, when you see how valuable (and easy) it is to pair them together! And that's exactly what we're going to do here.

We'll begin by building out a simple and static Svelte app. Then we'll add TypeScript support to the app and discuss how and why we've made it more powerful and even easier to write the code (even though it means writing more code). And we'll close by exploring how simple it can be to make the application dynamic, using Sanity as our data source.

Why you should use Svelte

I know, I know. Another one? Really?

Hear me out for a moment. It has its place. It's like React in that it is a component-centered means of building out UIs. In fact, Svelte often uses React in explaining its theoretical approach. There are nuances that separate the two, with pros and cons to each. But, to me, it boils down to one main idea when differentiating Svelte from React:

Svelte introduces the ability for almost no boilerplate code, but it's also young and fairly simplistic (relatively speaking, what's going on under the hood is ... complicated). React, on the other hand, often requires a fair amount of boilerplate code, even for simple interactions. But it's mature, stable, and has a large community.

For that reason, I really like Svelte for simple use cases. But, with wider adoption and tools like Next.js, React is still my go-to for larger scale or more complex application interfaces.

Why you should also use TypeScript

TypeScript is an extension of JavaScript. You can think of it as JavaScript with a few extra features. These features are largely focused on defining the type and shape of JavaScript objects. It requires that you be declarative about the code you're writing and have an understanding of the values your functions, variables, and objects are expecting.

While it requires more code, TypeScript is a fantastic means of catching common JavaScript bugs while in development. And for just that reason, it's worth the extra characters.

TypeScript isn't really a language. In fact, it compiles down to regular old JavaScript. As a bonus, you have the option of choosing a particular version of JavaScript to target when compiling, so you can use updated JavaScript features, but still maintain legacy browser support (if you're into that sort of thing)!

Why you should use Svelte and TypeScript

Svelte is, in itself, a great toolkit. Add TypeScript to it and they become a fearsome duo that may just help Svelte scale to a point at which I'd feel comfortable implementing on larger applications.

That power comes in being able to write better code at build time, thus running into fewer bugs in production (i.e. at runtime). How do we achieve that?

Well, let's go through a simple example with Svelte in just JavaScript at first, before we run into an issue and can see how TypeScript will help save the day!

The classic SPA example is a to-do list. But, you know what? I don't like to-do lists. They make me think about all the things I have to do, many of which I don't want to do.

So why don't we make a To Don't List app? That way we can list all the things we're not going to do. Ever.

We'll build it statically at first, and later use Sanity to store our data, and Sanity Studio to populate a few items. But first, let's focus on Svelte and TypeScript.

The code we'll write in this guide is a simplified version of the seancdavis/svelte-sanity-tonotdo project on GitHub. There is a working demo deployed to Vercel.

Let's begin by installing Svelte and setting up a new project.

After running those four commands, Svelte's development server should be running. See it in action by visiting http://localhost:5000 in your browser. 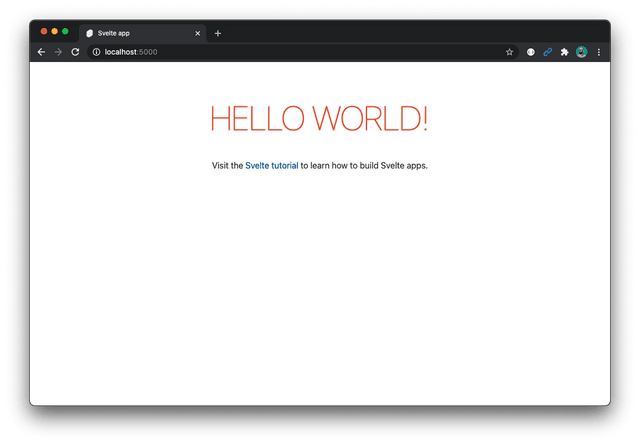 Next, let's add a component so we can build our To-Don't list. I'm going to call the component InactionCard and place it at src/components/InactionCard.svelte.

Note: If you want to follow along with styling, you can replace public/globals.css with the full example code, and also pull <style> contents from individual component, like this one.

To bring it to life on the home page, adjust the default intro copy and render a few inactions from the main src/App.svelte component.

Take a look back at your browser and you should see the list! (Refresh if you don't.) 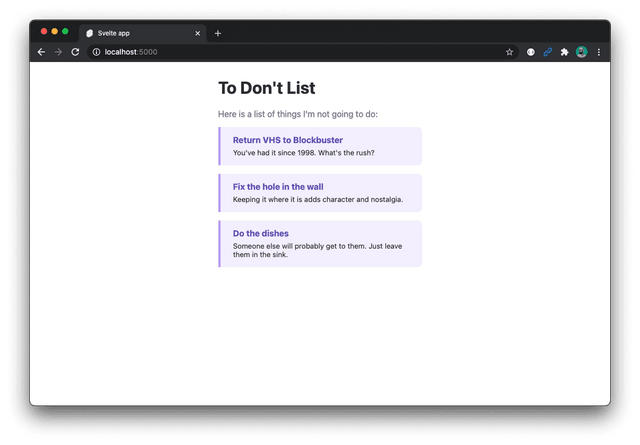 There we go! We have a (very simple) Svelte app with just HTML, CSS, and JavaScript.

Adding TypeScript to a Svelte project

Now, suppose we wanted to add a due date. It's not too difficult in this example, right? Let's do it!

We add a new property to the Inaction Card component:

And to the inactions we render, we can add the new prop:

Then jump back over to your browser: 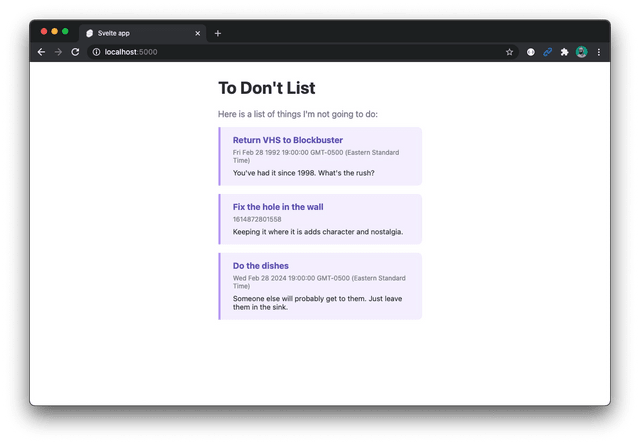 Notice anything weird? I do. Two things, actually:

What if, we rendered the type of dueDate instead? (i.e. typeof dueDate) 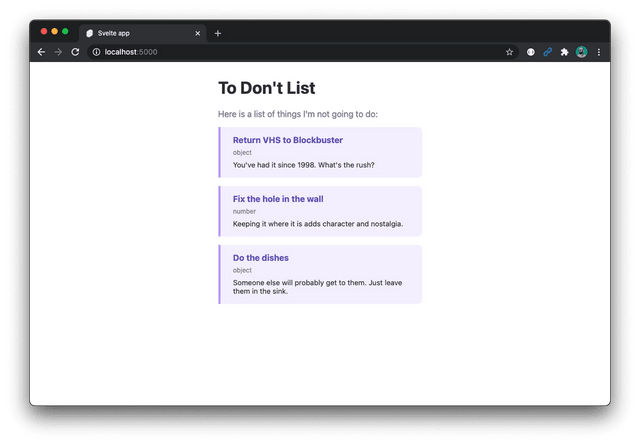 We get number for the second one! Even with this small of an application that could absolutely be an issue. Suppose you wanted to better control the formatting of the date. You'd have to first introspect the type of date and then format appropriately. It'd be much easier if we know (with confidence) what type to expect.

We can use TypeScript to tell our application exactly what we expect in dueDate.

Since our Svelte app is still largely untouched, we can use the built-in utility to convert it to TypeScript. Shut down your development server (ctrl+c), and then run the following commands:

This made several changes, but the most important one is that you now need to specify the language in your <script> tags as ts. Take a look at the change in src/App.svelte:

Make this change to your Inaction Card component.

To make this adjustment process smoother, let's DRY up our code. Adjust your App.svelte to loop through an array of inactions that we create in the <script> section.

TypeScript is really all about types. (It's in the name, after all!) To add types in a Svelte project, we'll want a separate .ts file. Let's put our types in a types directory, just to stay organized.

This tells us that when we set an object as an Inaction, we expect it to have title and notes as a string, and dueDate as a Date.

To use it, import the type and then note it. The syntax is a little goofy at first, but you'll get the hang of it.

After I restarted my code editor (VS Code), it told me something was wrong!

This says dueDate on the second inaction is the wrong type!

The power in this is great! VS Code told me there's an issue with the code without having to open up the browser!

If that's useful even on this small scale, imagine how helpful it would be in a large application where Inaction may be used dozens or hundreds of times!

Aside from the code editor adding little squiggles, nothing would actually appear wrong during the Svelte build. Fortunately, Svelte gives us a tool to make sure everything is okay, svelte-check.

I see an error and three warnings:

You can wire up this command to your build process so you don't send invalid typed code to production. Amazing!

I hope this validates (😉) the use of TypeScript and Svelte enough to entice you to try it out for yourself! But before we go, let's take a look at wiring this up to Sanity so that we can pull in data dynamically from an external source.

Wiring up Sanity to a Svelte project

To get Sanity up and running, begin by installing the CLI and bootstrapping a new project.

After authenticating, choose the appropriate items to get your project started. These were my choices:

That will install dependencies and prepare a Studio project. You should now be able to change into the new directory Sanity created for you and start the Studio.

By default, the Studio will be available in your browser at http://localhost:3333/. You'll have to sign in again. And when you do, you should see that you have an empty schema. 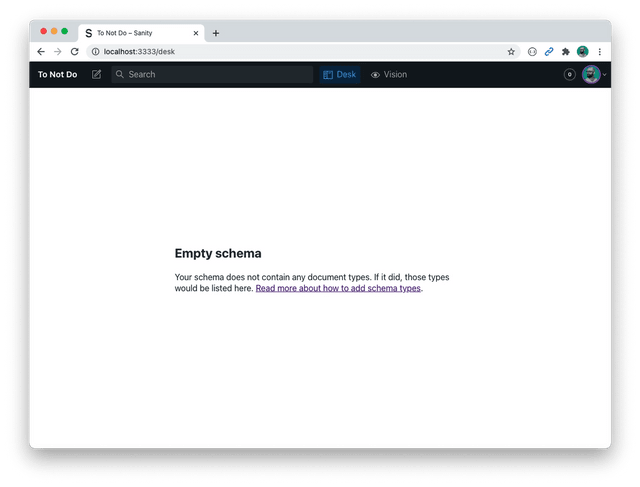 Let's create our data model, which Sanity calls a document type. If you're not familiar with Sanity, here's a nice overview of content modeling.

To add our model, we're going to edit the (nearly) blank schema file Sanity gave us. This file lives in schemas/schema.js. It should look something like this:

We're going to put our type in the types object. Let's create an inaction model with the proper fields:

Notice that if you go back to your browser, Studio already picked up your changes! (Science! Or something?)

Use your new model to recreate the static content from src/App.svelte. 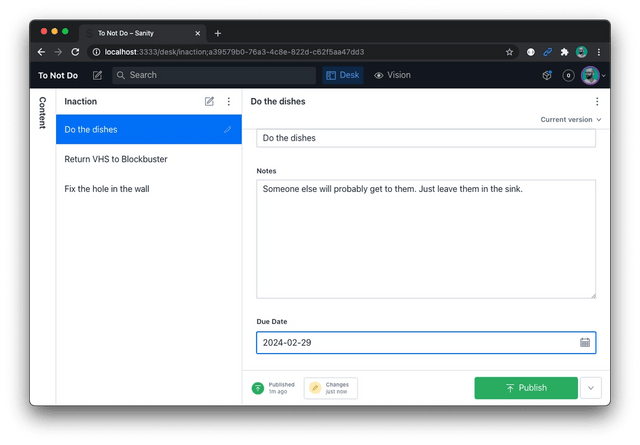 Once that content is in place, we can pull it into project. First, install Sanity's JavaScript client.

Then we can make some changes to the <script> in our App.svelte component to fetch our inactions from the Sanity API.

And now you are reading dynamic data for the list of things you're never going to have to do!

I hope you are intrigued enough by this to to tinker with these super cool tools! And if you want to keep going with this example, here are some ideas on where to go next:

I'd love to learn where you choose to take your project. The things we can build with Svelte, TypeScript, and Sanity are endless! Let's chat!

Last, here are a few other resources for further reading on Svelte + TypeScript:

Once suspended, sanity-io will not be able to comment or publish posts until their suspension is removed.

Once unsuspended, sanity-io will be able to comment and publish posts again.

Once unpublished, all posts by sanity-io will become hidden and only accessible to themselves.

If sanity-io is not suspended, they can still re-publish their posts from their dashboard.

Once unpublished, this post will become invisible to the public and only accessible to Sean C Davis.