I have eight Raspberry Pi 4 8GB and wanted to setup them up to be a High Availablity (HA) Kubernetes Cluster for some projects that comprise of Edge, Fog Computing.

The Problem is redundancy of setting these Pis up with pretty much the same thing.

Think of installing something but doing it 8 times in total! Sounds more of an hassle!

Using ansible we can setup a number of Pis in the cluster without having to repeat anything! 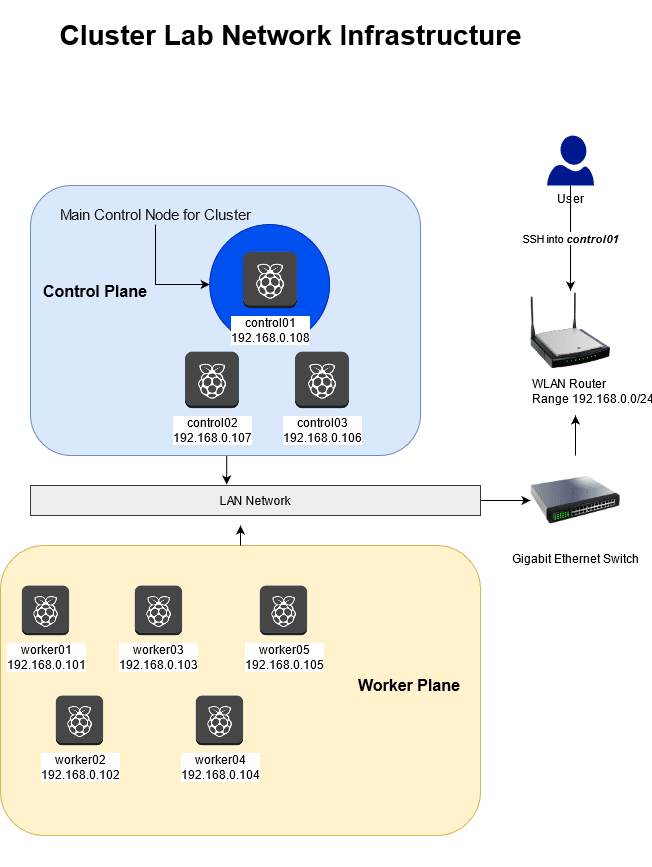 Note: SD Cards are not the best choice, since they wear-out over longer usage.

A possible solution is to by USB3.1 based storage disks which can be used to store information
and boot the Raspberry Pi Up.

For the time-being, the SD Cards will do just fine.

Either use DHCP Address Allocation on your WLAN Router to dedicate a fixed IP address to the MAC Address of your Raspberry Pi 4s or configure your Operating System for your Pis with static IP Addresses. I chose the former method, since mapping the MAC Addresses with defined IP addresses using your WLAN router's UI is way easier. Also I wasn't aware what the MAC Address of each of the Pi was beforehand, so the UI was able to show it to me easily.

Each Raspberry Pi 4 has a function to perform, we split them into 2 major roles.

As described in the figure, I will pick 3 Pis as Control nodes. They will be able to control
the worker nodes and also be a bit more fault-tolerant as compared to having just one node control the whole cluster.

The are the real MVPs here. These nodes will do all the heavy lifting for us.

Note: all the Pis will have the username ubuntu

Be a nice developer / administrator for once and log into each Pi and change the passwords to something safe. Just this one time.

As it is, Ubuntu will insist you on changing the password for the ubuntu user on the very first SSH Login. Might as well begin with good security practices!

For the sake of simplicity, you can keep the same password for each Pi (but preferably you would use some form of password generator for distinct passwords for each Pi)

I promise, this is the only time you will have to login these Pis individually!

You can change the passwords for the user ubuntu and root using:

Setting Up the Cluster

We map the names of the Pis to their respective IP addresses and use the .local mdns FQDN for ease of access

Introduce Ansible to your Pi Fleet

Change the Hosts file for ansible as follows:

Remember that at this point of time we haven't even changed the names of the hosts on each Pis,
we have just mapped the IP Addresses to a name! But we will automate such changes via ansible

In the configuration for the ansible hosts, you could see ansible_connection=ssh in all but one nodes. This is achieved by generating an SSH key from the present Pi and shared to all other pis

Okay! I lied before about just the one time doing the redundant task on all Pis. Here you might have to share the SSH Public Key to all other Pis One Last Time!

Let me show you why I am blow away by ansible

Ping all the nodes using:

You can ping just the control nodes using

Change the hostname for each Pi via ansible

Now, remember each Pi on the network is still called ubuntu@ubuntu where ubuntu is also the hostname. To do it manually would comprise of executing the following command in each Pi

in the /etc/ansible/hosts file we declared var_hostname=... which will set the names up in a single command line instruction

And Voila! this will be done for all Pis. To check the name changes execute:

and all the Pis should have the designated hostnames

you need cgroup enabled in the Pi to do fun stuff with containers (docker, kaniko etc.) in the
/boot/firmware/cmdline.txt file.

Do this via ansible:

Install microk8s on the cluster

You can install microk8s on each pi using Snap from Canonical using:

The command will install microk8s v1.21/stable on each Pi

To check the status using ansible:

I am honestly blown away by ansible as tool and planning to learn it and other aspects like the Playbooks where you can configure the fleet using files!!

Once suspended, shandesai will not be able to comment or publish posts until their suspension is removed.

Once unsuspended, shandesai will be able to comment and publish posts again.

Once unpublished, all posts by shandesai will become hidden and only accessible to themselves.

If shandesai is not suspended, they can still re-publish their posts from their dashboard.

Once unpublished, this post will become invisible to the public and only accessible to Shan Desai.

Thanks for keeping DEV Community safe. Here is what you can do to flag shandesai:

Unflagging shandesai will restore default visibility to their posts.