Welcome to the 3rd part of the scala beginners crash course, here we will go through the functional way of scala programming language and concepts like higher-order functions, curries and anonymous functions!

It will be a no-nonsense, to the point kind of article (like part 1 and part 2) with all necessary links wherever needed.

Without further ado, let's get started.

What Is Functional Programming?

The below is an excerpt from the Functional Programming in Scala book.

Functional programming (FP) is based on a simple premise with far-reaching implications: we construct our programs using only pure functions, in other words, functions that have no side effects. What are the side effects? A function has a side effect if it does something other than simply return a result, for example:

We discussed side-effects also in part 1.

Note: Functional programming is a restriction on how we write programs, but not on what programs we can express.

Before we start coding out, first create a new object in the crashcourse package (please go through part 1 for more information on creating packages and objects). 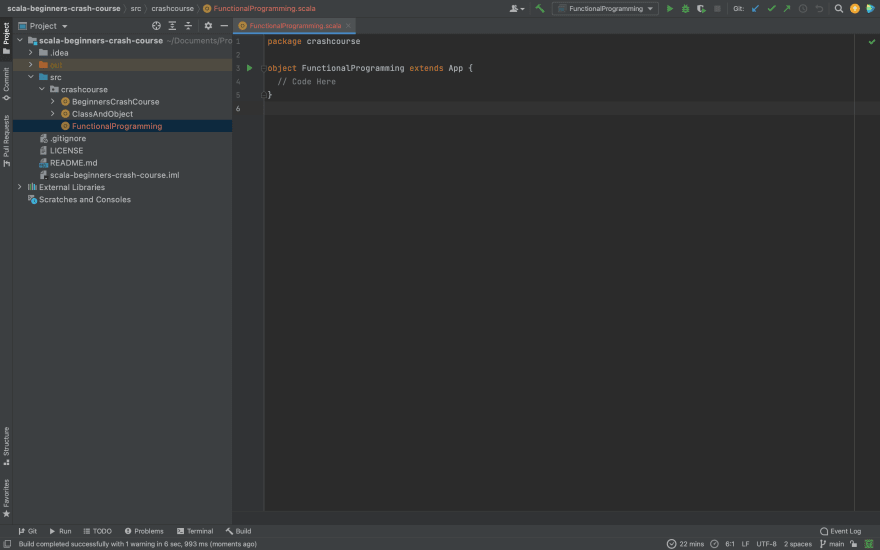 Now, we can start coding out examples on this scala application.

Before moving on to create functions in scala, please keep in mind that scala works on JVM and for JVM it needs classes/objects to work with, hence everything in scala will be an object, even the functions are objects.

Note: Due to scala's syntactic sugar, we can still write functions in a more functional fashion.

Let's create a function in scala:

Scala has a collection of functions namely Function1 to Function22, which can be used out-of-the-box without any issues.

A function like Function1[String, Int] represents that it will take String as an input and evaluates to Int as an output. This function definition will be written in its apply method, as Function1 is an object and we need to override its apply method to make it callable.

A simple syntactic sugar for a function like Function2[Int, Int, Int] would be (Int, Int) => Int, which is more functional while reading the code.

We should also note that while working in IntelliJ, it tells us that the given Function1[String, Int] can be converted to its respective syntactic sugar, we can do so by hovering over the yellow line and simply clicking Replace FunctionN[A1, A1, ..., AN, R] with (A1, A1, ..., AN) => R.

The anonymous function is something we saw in the previous example of Function2[Int, Int, Int] syntactic sugar.

So, the below expression:

can be written as:

Anonymous functions are just another way of writing functions as supported by scala's compiler, behind the scenes everything is the same.

More ways in which we can write anonymous functions:

Higher-order functions have at least one of the following properties:

In scala, a general higher-order function declaration can look like this:

These are called Higher-Order Functions, which essentially takes one or more functions as input and/or returns a function as output.

Well, that wraps up part 3 of this crash course.

I highly recommend you to go through the books below to get a better and deeper understanding of functional programming:

In the next part, we will discuss some topics specific to scala, like options, handling errors in a unique style and pattern matching (the most awesome thing in scala).

Thanks for keeping DEV Community 👩‍💻👨‍💻 safe. Here is what you can do to flag siddharth2016: