Welcome to this scala beginners crash course, here we will go through the basic syntax of scala programming language and some of the nuances available just for scala developers!

It will be a no-nonsense, to the point kind of article with all necessary links wherever needed.

Without further ado, let's get started.

Scala is a programming language just like any other that is available out there but with a lot of sweetness and awesome features that opens our world to functional programming with easy to understand syntax, running on JVM under the hood, having all functionality that Java language offers with popularity ranging from being used in major FinTech companies to FAANG companies and as one of the major language for data engineering applications.

Need to know more about what is Scala, visit here.

How To Install Scala?

Well, there are a couple of ways, in which the shortest and easy to follow is: 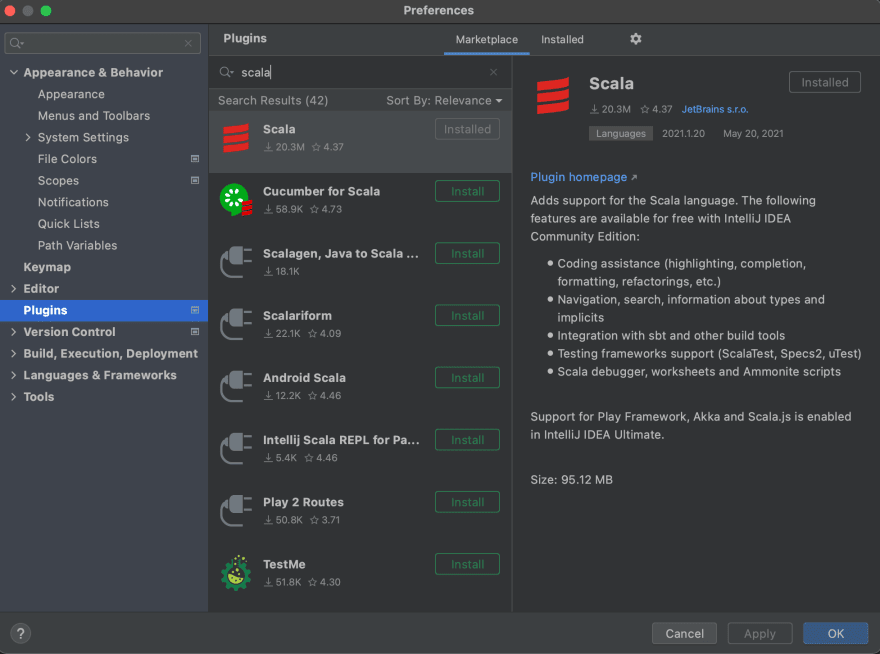 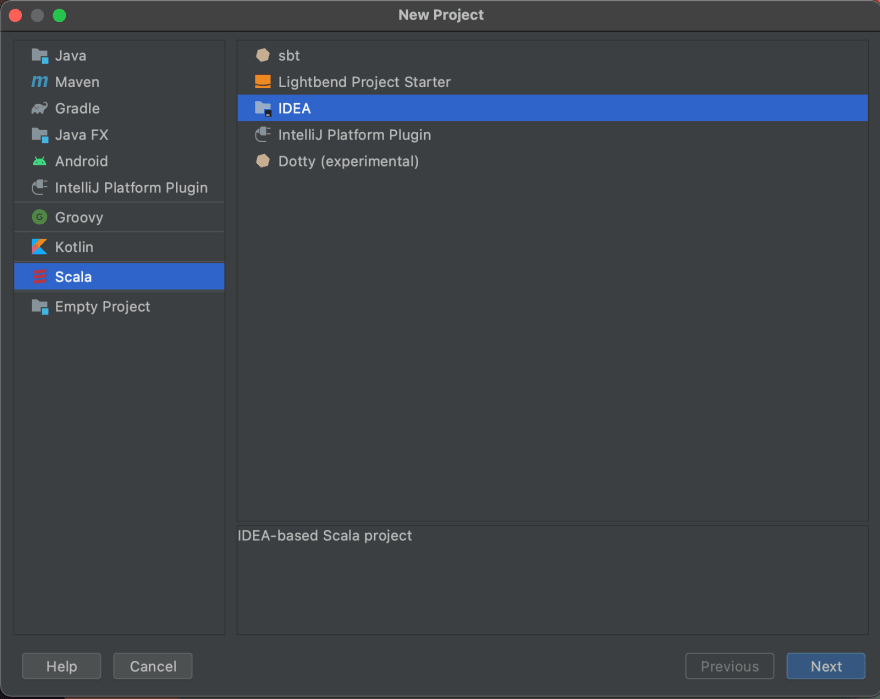 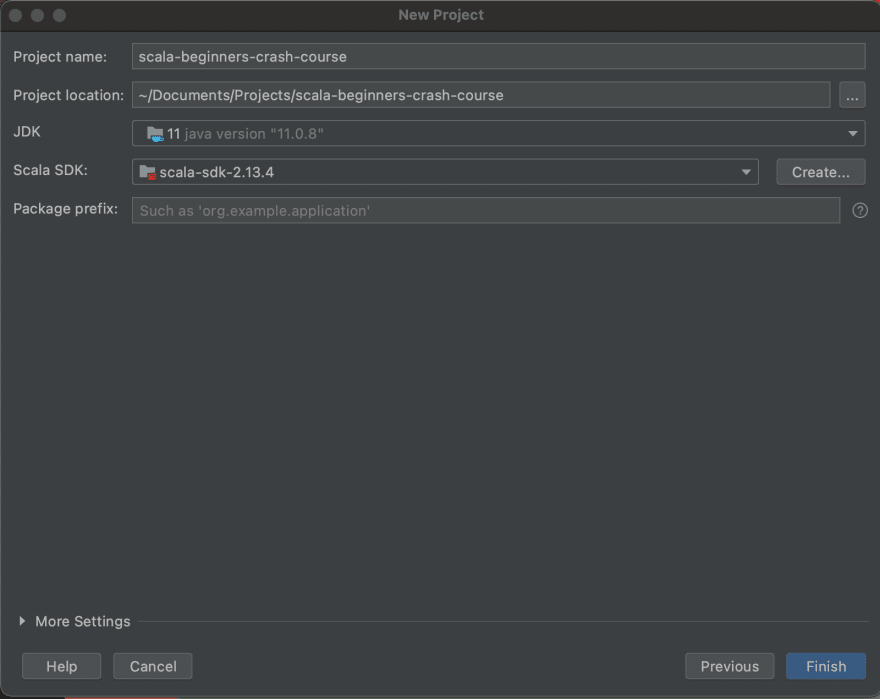 How To Start Working With Scala?

After successful installation and creating a scala project, you would be seeing a nice project structure with src folder.

We will create a package, inside that package we will continue our work. What is a package?

To create a package, right-click on src folder and select New | Package type, then fill in a name, whatever you like, for our case, let's name it crashcourse. 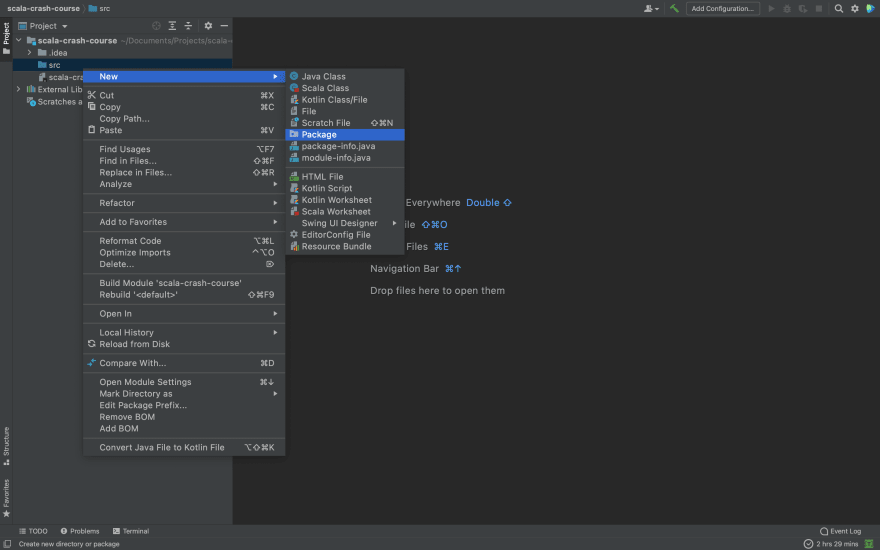 Now, right-click the crashcourse then New | Scala, here we are creating a scala object (we will discuss what scala object is in a minute). Let's name it BeginnersCrashCourse. It will create a standard template of scala object like below: 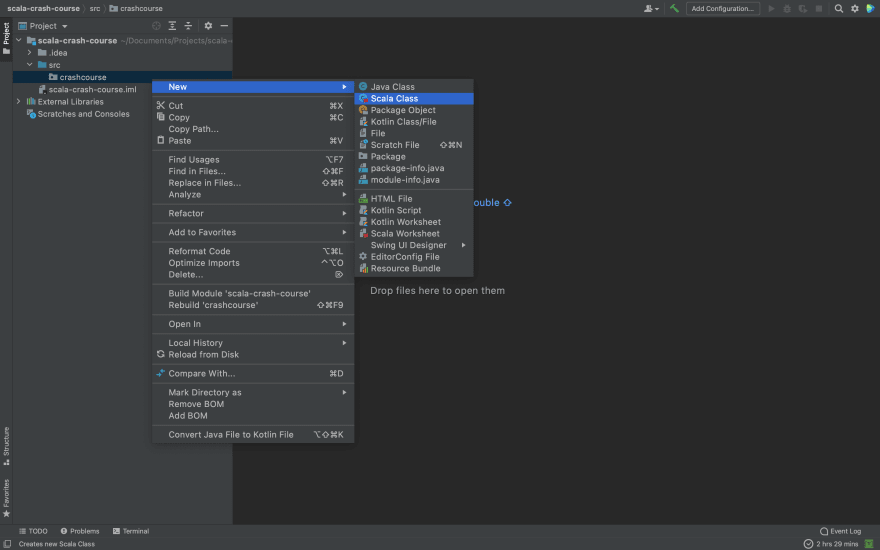 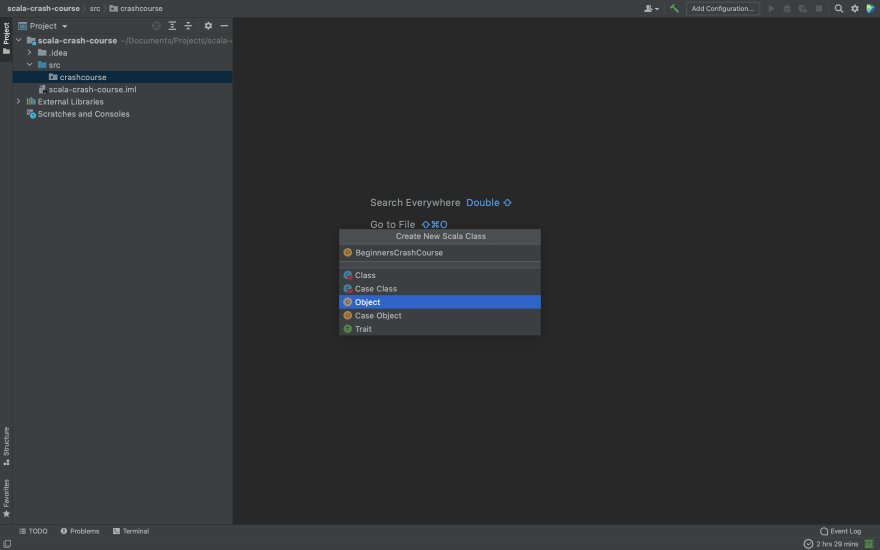 Well, now we have all we need to get started with some code!

What Is An Object?

Before moving to object, if you notice the created template have package crashcourse at the top, it means that whatever code we are going to write below this, will belong to this package and can be accessed by any code file within the same package or can be imported using import crashcourse._ in some other package. How to do imports in scala?

Now, what is object in scala?

Scala objects are singleton, which means if we say we have an object named BeginnersCrashCourse then it is an instance that is a singleton in nature and whenever I am accessing it in the same executing program then its behaviour is going to be the same at every place, containing same values, methods or functions.

Treat an object as something that has static class level functionality.

How to write an object? Simple, just use object keyword before writing an object, like below:

What is extends App? We extend App level functionality to a scala object whenever we want it to be able to run something inside it. It is like saying, we have a prebuilt public static void main(String[] args) whenever we extend it.

The above code is equivalent to:

Just to avoid writing the main method we can simply extend App to an object.

It is called a Scala Application if the main object (here BeginnersCrashCourse) extends App and is executable in nature. The main code goes inside an object that has App level functionality. Make sure you have a single main application while creating a service. Each service will have its main application to execute scala code.

How to create a variable in scala?

Well, there are 2 ways in which we can create a variable in scala:

Writing comments in Scala is the same as Java.

The key difference between the 2 variables is that var1 is mutable and var2 is immutable and in functional programming, we will prefer to use immutable values.

val - values and var - variables, the name suggest itself that val will be a definite value whereas var are variables.

We can also use the semicolon ; at end of each line, but they are not needed. We can also define types to the variables, but for the above case, compiler does this work for us, although it is best to explicitly define the type of each value we use in our code. So below code is similar to the above:

There are several data types available in scala, some of them are as below:

Now, let's move on to defining methods in scala. It can be done so using def keyword, methods can take arguments passed to them as parameters while calling them. We can define empty methods as well, those that take nothing.

Let's define some methods and call them:

There are lot of things happening here, let's break it down for each method:

1. We define a method using def keyword, our first method named greetings takes a single parameter named name which of type String and the method returns a value of type String denoted by : String after greetings(name: String), and this method evaluates to "Hello " + name with replacing with whatever name value we pass. We can print it to the console using println method that conveniently puts a new line after printing the passed value to the console.

A little detour before we move on to the next methods.

Now, the remaining methods can be understood well.

2. We define the second method greetingsModified that takes a parameter named name of type String but evaluates to Unit as all this method does is print the greeting to the console as a side-effect.

3. The last method we wrote greetingsFromSystem does not take any parameter and evaluates to Unit with the side-effect of printing to console. This is called a parameterless method, scala allows us to define such a method, awesome, right?

For each method call, the following is the output to the console (to run a scala application, right-click and run in IntelliJ):

More on Unit type and other such types, visit here.

Well, that warps up part 1 of this crash course.

In the next part we will be discussing classes, more on objects, companions, case classes and much more related to object-oriented programming in Scala.

Make sure to follow me to get the update for the next part or subscribe so that you never miss my upcoming blog articles ranging from Python Programming to Computer Vision to Scala Programming.

Thanks for keeping DEV Community 👩‍💻👨‍💻 safe. Here is what you can do to flag siddharth2016: