If you use AWS, you should make sure you have the right account structure in place. If you just go ahead and use a root account, you might just lose your whole business.

Now that I have your attention (and that you are rightfully scared of the bad people out there) I wanted to talk about the tools that AWS offers to manage permissions for its resources, also called IAM.

IAM is extremely powerful, but the sheer amount of things that they throw at you can be scary at first. Just check how big their FAQ is. I have been using it extensively in my project to manage access to our resources, but I realized recently that we did not have a very sound understanding of the basic pieces, so I drew all of that on a whiteboard to make it easier to understand.

The roles that we provision should have as little rights as possible. The fewer permissions that you grant the better. That protects you against attacks, but also against bugs.

This picture should give you an idea of where we are: 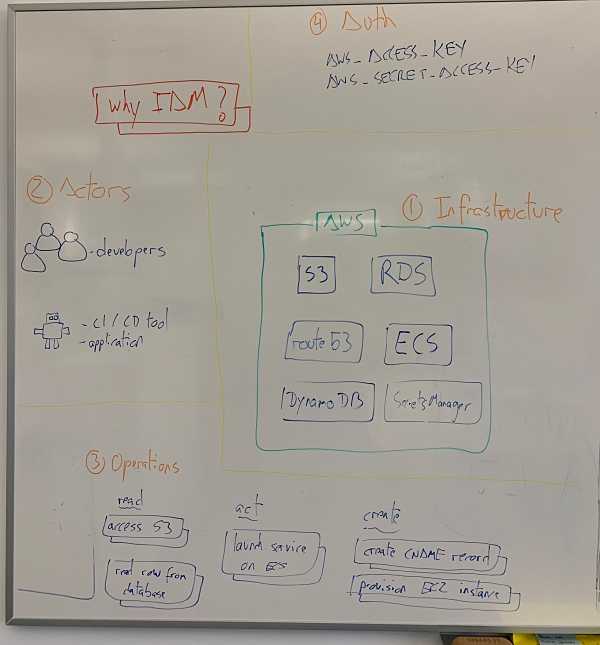 At this point you could say fuck it, I’m just going to pass these credentials around. But there are a ton of things that can go wrong. What happens if those credentials are leaked, for instance? Thankfully, AWS offers a way to deal with this. We will be using roles to group the permissions that we want to create.

What is a role? Quoting the official documentation:

An IAM role is an IAM identity that you can create in your account that has specific permissions. 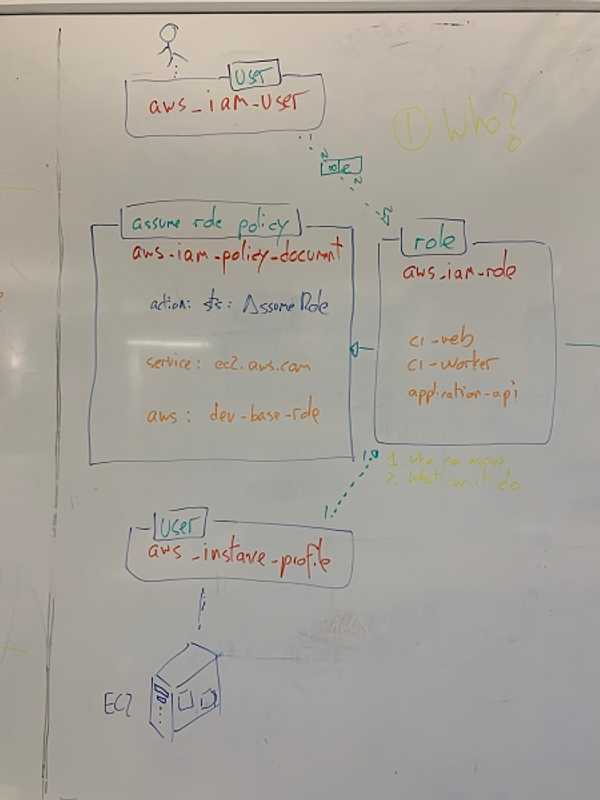 This means that we are going to create different roles that will be assumed by some of our actors (ci-web for example, or a specific role for each application that we want to deploy). They are defined using aws_iam_role. It looks like this:

If this role is going to be assumed, we need to grant permissions for that as well. In this case, we want an EC2 instance to be able to assume it, as our CI will be running there. We can do that with a aws_iam_policy_document.

The last part of the puzzle is defining an aws_iam_instance_profile, and using it in the aws_launch_configuration of said instance.

Thus far, we have set up our roles, but those roles are not actually allowed to do anything, yet. We need to create some policies that allow access to the resources we want to use, through aws_iam_policy: 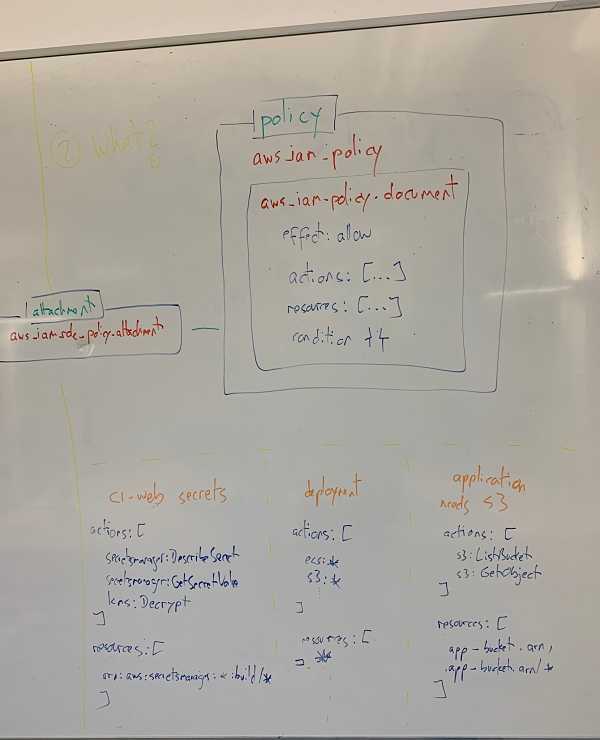 I already wrote about how to use these policies to grant access to the AWS Secrets Manager from Concourse. In the end, we always follow a similar structure. Each policy contains a of statements that define the access we want to give. Don’t forget to use a aws_iam_role_policy_attachment to bind the policies to the role.

Statements are quite flexible and have a bunch of configuration options. I am going to focus on three of their arguments, effect, actions and resources.

effect can be either Allow or Deny. We actually always set them to Allow. Why? As mentioned, we want to give the least possible amount of privileges, so our policies should only be granting what a role absolutely needs. That means there should never be necessary to revoke a particular permission in a different part of the code.

actions are what we want to be able to do in AWS. They basically map to single API calls, and they are really granular. What you should really avoid is giving blanket permissions such as:

This not only goes against the principle of least privilege, but it also will create a maintainability mess, as you will have a very hard time afterwards reducing permissions without something breaking. Trust me on this one, invest the time upfront and make sure you only give permissions that are needed. There is an excellent reference guide that I find extremely useful when giving permissions incrementally.

Lastly, resources are the ARN’s that this statement applies to. As with the actions, it is a very good idea to avoid using wildcards.

There are more things you can do, such as using principals or conditions, which are out of the scope of this article. However, you can get a lot of mileage out of just actions and resources.

This is it, you don’t really need anything else to build a solid and secure foundation in which to run your applications. Using different roles and giving them the access they need through policies step by step is all there is to it, really.

Testing this still remains a challenge, as IAM failures tend to manifest only when you actually try to run the whole thing in your environment. Don’t succumb to the temptation to take the easy route, though. Fixing a bad permission setup is hard, and you will regret it.

I develop software for a living. Then I go home and continue reading about software because I just can't get enough

How to use AWS named profiles

View All EC2 Instances from all the regions