As a brand new-ish leader of people at Hyland, I am regularly in search of ways to solicit feedback from my team.

Yearly, Hyland has a Leadership Evaluation Process which does provide that level of anonymity that I require, plus the organizational support around it. Unfortunately, this only reviews the people in leadership, and not necessarily the health of the team. Back to the drawing board.

My wife solves the problem

My wife mentioned to me offhand that she her organization's weekly "Voice of the Team" survey is moving to a biweekly cadence. This sparked my interest, mainly because I had no idea what she was talking about.

She explained it as such:

That's it. Three simple questions, sent weekly, to gauge the health of the team and to provide the team a manner in which to provide feedback.

Using Hyland's Microsoft 365 subscription, I created a simple Microsoft Form for the given week, as seen in the screenshot below. 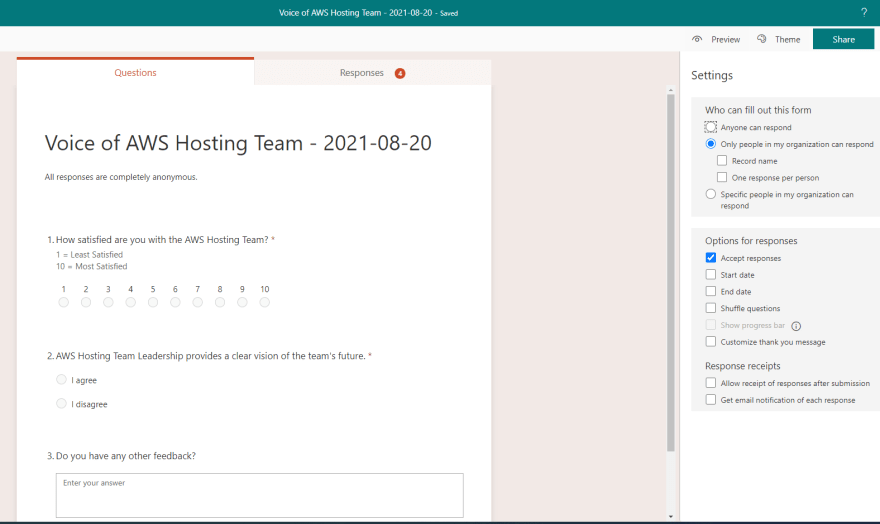 Note that we are not recording names! Totally anonymous.

Then I copied that form multiple times, one for each subsequent week. I gave each of those forms a different second question:

For now, those are the only three leadership-focused questions I've come up with. Future questions will likely include state-of-the-team type questions, in addition to some product roadmap ones.

Every Friday morning at 10am Eastern, I send out the following email:

In an effort to become more a more transparent and feedback-driven organization, I will be sending out a very short survey every week on Friday.

This survey is completely anonymous. While it requires you to be logged into your Hyland Office 365 account, names and emails are not recorded.

I strongly encourage you to respond honestly! The responses to these surveys will drive a portion of every department meeting.

My team spans three very distinct geographic regions: US, Poland, and India. Because I send this out Friday morning Eastern time, most of the non-US team members are not likely to respond on the same day.

I am not planning on closing the form until the next one comes out, so it gives the team a chance to provide feedback when they see fit.

I would love to get insight into other survey-style questions that anyone else might think fit in this type of feedback gathering! Let's hear it!

Some Project Management concepts that can help us

Git Flow - What is it and how it works?

What Does it Take to Build a Successful, Cross-Functional Team?

Once suspended, tonytalkstech will not be able to comment or publish posts until their suspension is removed.

Once unsuspended, tonytalkstech will be able to comment and publish posts again.

Once unpublished, all posts by tonytalkstech will become hidden and only accessible to themselves.

If tonytalkstech is not suspended, they can still re-publish their posts from their dashboard.

Once unpublished, this post will become invisible to the public and only accessible to Tony Morris.

Thanks for keeping DEV Community safe. Here is what you can do to flag tonytalkstech:

Unflagging tonytalkstech will restore default visibility to their posts.