As we saw in our previous post about connascence, Connascence of Position (CoP) happens when multiple components must be adjacent or appear in a particular order. CoP is the strongest form of static connascence, as shown in the following figure. 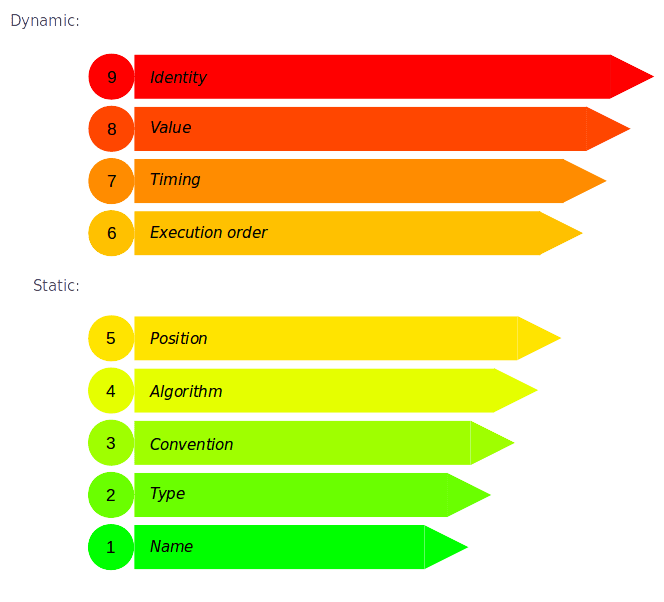 A typical example of CoP appears when we use positional parameters in a method signature because any change in the order of the parameters will force to change all the clients using the method.

The degree of the CoP increases with the number of parameters, being zero when we have only one parameter. This is closely related with the Long Parameters List smell.

In some languages, such as Ruby, Clojure, C#, Python, etc, this can be refactored by introducing named parameters (see Introduce Named Parameter refactoring)[1].

Now changing the order of parameters in the signature of the method won't force the calls to the method to change,
but changing the name of the parameters will. This means that the resulting method no longer presents CoP. Instead, now it presents Connascence of Name, (CoN), which is the weakest form of static connascence, so this refactoring has reduced the overall connascence.

The benefits don't end there. If we have a look at the calls before and after the refactoring, we can see how the call after introducing named parameters communicates the intent of each parameter much better. Does this mean that we should use named parameters everywhere?

Finally, moving to named parameters can increase the difficulty of applying the most frequent refactoring: renaming. Most IDEs are great renaming positional parameters, but not all are so good renaming named parameters.

There are also cases in which blindly using named parameters can make things worse. See the following example:

The activate_alarm method presents CoP, so let's introduce named parameters as in the previous example:

We have eliminated the CoP and now there's only CoN, right?

In this particular case, the answer would be no. We're just masking the real problem which was a Connascence of Meaning (CoM) (a.k.a. Connascence of Convention). CoM happens when multiple components must agree on the meaning of specific values[5]. CoM is telling us that there might be a missing concept or abstraction in our domain. The fact that the lower_threshold and higher_threshold only make sense when they go together, (we're facing a case of data clump), is an implicit meaning or convention on which different methods sharing those parameters must agree, therefore there's CoM.

We can eliminate the CoM by introducing a new class, Range, to wrap the data clump and reify the missing concept in our domain reducing the CoM to Connascence of Type (CoT)[6]. This refactoring plus the introduction of named parameters leaves with the following code:

This refactoring is way better than only introducing named parameters because it does not only provides a bigger coupling reduction by going down in the scale from from CoP to CoT instead of only from CoP to CoM, but also it introduces more semantics by adding a missing concept (the Range object).

Later we'll probably detect similarities[7] in the way some functions that receives the new concept are using it and reduce it by moving that behavior into the new concept, converting it into a value object. It's in this sense that we say that value objects attract behavior.

We have presented two examples of CoP, a "pure" one and another one that was really hiding a case of CoM. We have related CoP and CoM with known code smells, (Long Parameters List, Data Clump and Primitive Obsession), and introduced refactorings to reduce their coupling and improve their communication of intent. We have also discussed a bit, about when and what we need to consider before applying these refactorings.

[4] For instance, Sandi Metz recommends in her POODR book to "use hashes for initialization arguments" in constructors (this was the way of having named parameters before Ruby 2.0 introduced keyword arguments).

[5] Data Clump and Primitive Obsession smells are examples of CoM.

[6] Connascence of Type, (CoT), happens when multiple components must agree on the type of an entity.

[7] Those similarities in the use of the new concept are examples of Connascence of Algorithm which happens when multiple components must agree on a particular algorithm.

The history of Tectonics: a front-end payment page framework

What are the most influential papers for modern software development?

Trending on DEV
Why Writing Blog Posts Sucks (and doesn't suck!)
#productivity #learning #codenewbie
What was your win this week?
#discuss #weeklyretro
Tabs v. Spaces: Let’s decide this
#watercooler #discuss #style
If you've been laid off recently, I'd like to offer free portfolio/resume reviews/mock interviews
#webdev #javascript #career
Are newer developers pushed too exclusively towards web development?
#discuss #career #healthydebate
I GOT THE JOB: 3 Tips On How You Can Get Your Dream Job
#career #beginners #webdev #motivation
How much time should you spend looking something up before asking a question?
#discuss #productivity
What's something you did this week that you're proud of?
#discuss #productivity #codenewbie