At work we use Vincent Driessen's Git Flow branching model. Recently we found ourselves in the following situation:

Visually, that's what we had (each column represents a branch; and each point represents a commit, with a single letter instead of its hash): 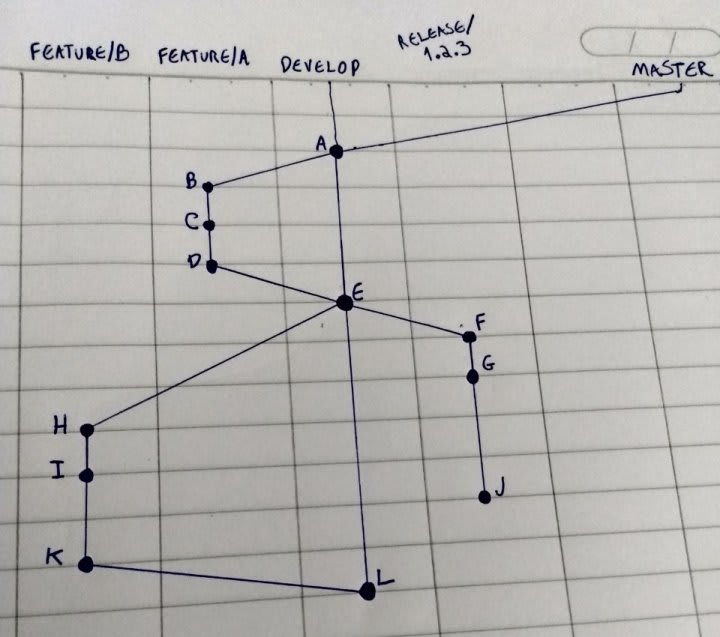 Now we just had to test and finish the release 1.2.3 (merge it into master, create a tag 1.2.3 at the merge, and then merge the tag into develop in order to integrate commits F, G and J) and deploy the newly created tag into production. Then we would create another release for feature B (probably 1.2.4), test, finish and deploy it.

For reasons that are beside the point of this post, it was decided that feature B should make it into production before feature A. In order to not mess up our version numbers:

Note: for simplicity, in the Git commands below I'll use the letter that was used to represent each commit in the images instead of the commits' hashes.

With a few basic Git commands (reset, revert, cherry-pick, etc.) we were able to solve our problem:

Automate your releases on GitHub

GitOps With ArgoCD Getting Started

Once suspended, victorosilva will not be able to comment or publish posts until their suspension is removed.

Once unsuspended, victorosilva will be able to comment and publish posts again.

Once unpublished, all posts by victorosilva will become hidden and only accessible to themselves.

If victorosilva is not suspended, they can still re-publish their posts from their dashboard.

Once unpublished, this post will become invisible to the public and only accessible to Victor Silva.

Thanks for keeping DEV Community 👩‍💻👨‍💻 safe. Here is what you can do to flag victorosilva:

Unflagging victorosilva will restore default visibility to their posts.