For browser automation and writing integration tests in Elixir

What is browser automation?

Browser automation is effectively the process of using a proxy (like Selenium or Hound) to perform browser actions on behalf of the user (like the test case). Essentially, we are automating the usage of the browser.

It is often associated with illegal applications like sneaker-botting but much like torrenting, there are positive applications and we will be exploring one of them in this post - integration testing.

What is integration testing?

However, while components may work well on their own, when combined with other components (to form larger components/whole systems), unexpected behavior may be exhibited. For instance, the input from component A is transformed before it is used as input to component B, thus, the combined components returns an unexpected result.

When combined with browser automation, we can ensure that a website works end-to-end. We can ensure that the data validation on the front-end works as intended and that the forms submitted by users are properly sent to the back-end and saved in the database.

We can take two approaches to browser automation integration testing. We could either

The former is time-consuming and requires a lot of care during development as we have to account for varying browser APIs and quirks. Thus, it is wiser to chose the latter when approaching browser automation integration testing. Doing so minimizes the number of components we have to manage.

This is where Hound comes into the picture. Hound provides a clean API to build browser automation tests. It relies on Selenium, PhantomJS, and ChromeDriver as the interfacing systems to perform the "dirty" work of coordinating requests/responses to/from the browser. 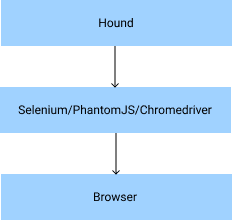 This introduces a larger question, what exactly is Selenium, PhantomJS, and ChromeDriver? More importantly, in fact,

"How is browser automation performed?"

Understanding how browser automation is performed provides us with a better foundation to grasp how these technologies work and how Hound works under the hood.

The world of web drivers...

The key driving (pun intended) of browser automation is web drivers. But before we can understand what they are, we should establish some basic understanding of what a driver is in general computing terms.

In general, drivers are responsible for translating the caller's request into a given format that the target can understand.

There may be variations of a caller to the same target so each driver must be able to translate their respective caller's request into a common request format for the target. For instance, there are multiple types of keyboards that can be connected to a single computer but the computer can only understand a single request format. So the respective keyboard drivers are responsible for converting the unique keyboard's requests into the format that the computer accepts.

Back to web drivers

Similar to general drivers, web drivers behave as proxies for the caller (Hound) to communicate with the target (browser). It allows the caller to send instructions for the browser to perform. In the web development world, a browser is also referred to as a user agent.

The Selenium project proposed a W3C specification to guide the development of web drivers. For the rest of this discussion, we will be relying on this specification. The specification can be found here.

According to the specification, there must exist a separation of concern when designing a web driver. More specifically, there are two components to a web driver:

The remote end must also provide an HTTP compliant wire protocol where each endpoint maps to a command for the browser.

The specification also provides an outline for the endpoints that the remote end must make available for the local end. This ensures standardization and ease of adoption for future browser drivers.

One advantage to using a HTTP server for the remote end is that it is possible to host the remote end on a remote machine. This means that we can delegate the job of integration testing to another machine, a process commonly known as distributed testing. By enabling distributed testing, the local machine is not burdened with the responsibility of testing potentially extensive and rigorous integration tests which the machine may not support.

So, how does Selenium work? 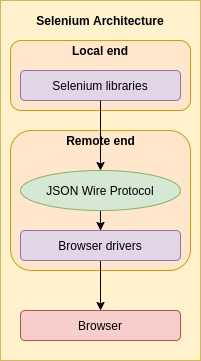 How does Selenium differ from PhantomJS?

PhantomJS is a headless browser library. Headless browsers are essentially web browsers without the graphical interfaces. Selenium, on the other hand, is a web driver. The key difference between the two is the way requests are routed and managed (PhantomJS is a rather interesting project so Open-source Deep Dive: PhantomJS edition maybe?).

However, Selenium supports headless browsers as well and more importantly, Selenium is still in active development while PhantomJS has been archived due to a lack of active contributions.

What is ChromeDriver then?

ChromeDriver is a browser driver developed as part of the Chromium project. It is used by Selenium as one of the supported browser drivers. However, Hound supports raw requests to ChromeDriver as the underlying HTTP server works the same with or without the use of Selenium. It is an interesting project so I may explore it in another installment of Open-source Deep Dive!

Hound: Under the hood

With a better understanding of how browser automation and web drivers work, we can in fact see that Hound doesn't rely on the entirety of Selenium (including the local end APIs). Instead, it relies on the remote end of the Selenium web driver (along with PhantomJS and ChromeDriver) to minimize the number of "moving components" that need to be managed while reaping the benefits of the existing technologies. Thus, it can focus on delivering a seamless API for developing browser automation integration tests.

Exploring a basic use case

We will inspect a basic use case of Hound before diving into how Hound works.

There is quite a bit to unpack here. Let's first understand the core of how a test suite with Hound is setup.

First, we use ExUnit.Case as Hound works hand in hand with ExUnit, a built-in Elixir library for developing unit tests. It relies on two components of ExUnit: setup and on_exit. This allows Hound to work as expected.

Then, we use Hound.Helpers which, with the power of macros, imports all helper functions that are required to access the browser session.

Finally, we call hound_session() which creates a new session (an instance of the browser) and initializes the setup and tear down functionality of a Hound browser automation test.

Once the core of the browser automation test is built, we can write test cases as per normal, leveraging on functions like navigate_to() and fill_field() to perform browser actions. The intended behavior of these functions are easy to understand and the documentation for them can be found here.

With a basic understanding of how a test suite can be setup in Hound, we can start to decompose Hound to better understand what makes it tick.

First, we need to inspect the following file: lib/hound/helpers.ex which houses the Hound.Helpers module, the same one that we use in the example above.

By overriding the __using__ macro, Hound is able to import all of the helper functions into a given file with a single use statement. This helps to minimize the boilerplate for users to get started. Macros are meta programming constructs that inject code during compile-time. More on macros here.

Hound.Helpers also defines the hound_session() function which relies on setup and on_exit() of ExUnit to setup and tear down a session between every test case.

Each helper function constructs a HTTP request to the browser driver server using Hackney . For instance, navigate_to - which opens a given URL in the session - creates the following HTTP request:

Hound rolls its own HTTP request/response management system that supports multiple retries. This can be found in the lib/hound/request_utils.ex file.

We have managed to break down the core functionality of Hound. There are additional interesting components to Hound that I would like to explore as well.

Applications are started according to standard OTP specification (here). lib/hound.ex starts a link to Hound.Supervisor which initializes two workers: Hound.ConnectionServer and Hound.SessionServer. These are child processes (Hound isn't fully up-to-date with Application convention) that the supervisor manages.

Let's explore what the connection server and session server are all about next.

This process is responsible for managing the details of the browser driver and providing information to construct the HTTP server endpoints. It stores the driver information using Agent to allow the information to be accessed across processes.

Sessions, as mentioned earlier, refer to instances of the browser that we want to run our tests on. As Hound supports multiple sessions across different processes, it has rolled a session management system.

Session management in Hound relies on ETS, a built-in storage option provided by Erlang and available in Elixir. When the session server first starts, it creates a new ETS table to hold the session information. This server is setup as a GenServer which allows it to support asynchronous and synchronous callbacks from other processes.

When a session is first created by hound_session(), the current process's ID (by default, it's the main process) is related to the session. The process is monitored and the new session is created. Under the process ID, multiple sessions can be created, thus allowing Hound to support multi-session testing. Each session is identified by an ID. Each session is also assigned a name. By default, we use the session name of :default. The ETS table holds the following information (mapped to JSON for illustration purposes. In reality, ETS tables store tuples of data so the actual data stored does not include any keys, just the values in the given order):

As you can see, a session name can be assigned to the same session ID, but not the other way around (I am not too sure why this is setup as such, more investigation would be required).

Instead, the session ID is retrieved from the server on demand using the current_session_id() function in lib/hound.ex.

If a process dies - i.e. Process.monitor() sends a DOWN message - the session server will destroy all associated sessions with that process asynchronously.

The configurations are stored as application environment variables which are retrieved by the connection server.

Other rather interesting bits of Elixir convention that Hound employs are:

To conclude, Hound is a browser automation and integration testing library built on top of web driver - more specifically, browser driver - technologies as it leverages Selenium, PhantomJS, and ChromeDriver to build a highly abstracted and simple to use API for building integration tests.

Under the hood, Hound is an intriguing project that uses fundamental constructs to build powerful internal libraries that support complex operations.

NOTE: I do not condone the use of browser automation or torrenting for illegal purposes. Any links or discussions about the mentioned subjects are purely for educational purposes and should remain as that.

Open-source Deep Dive is a series where I pick apart open-source projects to explain the underlying concepts that power these projects and share my findings about the project!

Your PRs make a difference 😍

We've got a great set of issues to finish documenting our v1 API. Can you help?

Once suspended, woojiahao will not be able to comment or publish posts until their suspension is removed.

Once unsuspended, woojiahao will be able to comment and publish posts again.

Once unpublished, all posts by woojiahao will become hidden and only accessible to themselves.

If woojiahao is not suspended, they can still re-publish their posts from their dashboard.

Once unpublished, this post will become invisible to the public and only accessible to Woo Jia Hao.

Thanks for keeping DEV Community 👩‍💻👨‍💻 safe. Here is what you can do to flag woojiahao:

Unflagging woojiahao will restore default visibility to their posts.