Ok, let's begin. My main intention is to play around with Docker containers and see if there are any benefits for Automation testers.

Given that the world is moving from a VM world to a container world it's kinda obvious that one has to move towards containers but it's not necessary for all.

In this article, I am going to explain how one can configure WebdriverIO to run the test scripts in a docker container using Selenium-hub.

What do we need

The project is made possible by volunteer contributors who have put in thousands of hours of their own time and made the source code freely available under the Apache License 2.0.

Status: Grid 4 is under development and on a Beta stage

We are doing prereleases on a regular basis to get early feedback. This means that all other Selenium components can be currently at a different alpha version (e.g. bindings on Beta 1, and Docker images on prerelease Beta 2).

Docker images for Grid 4 come with a handful of tags to simplify its usage, have a look at them in one of our prereleases

To get notifications of new prereleases, add yourself as a watcher of "Releases only".

Doubts or questions? Please get in touch through the different communication channels available in the Community section.

You can watch this entire article in a video in the below link as well.

Ensure you have the automation script working on your local machine. In case you don't have it ready you can download this from this repository.

This is a sample script to run WebdriverIO Automation scripts in docker. I have added the compose file and the package.json You can clone this repository and do an npm install to get going.

You can watch a video of how we can use docker to run automation scripts in the below link. https://youtu.be/NDt4alzH5E0

Changes to the configuration file

In your WebdriverIO config file, you have to make 2 changes

Add the location where you are planning to run your Selenium hub. Here I am running on the default port 4444 as shown in the screenshot.

Specify the runner to be docker.

Create the containers for Selenium Hub and Node

You can consider this to be the brains of the execution.

Selenium Hub will control which node should run which spec file/feature file and will distribute the unexecuted files based on the availability of the nodes.

This is a simple Linux system with all that we need to run out Automation scripts i.e. browsers

Option 1:
Manually run the commands on your terminal and kind of establish the communication between the hub and the nodes

Option 2:(Recommended approach)
Simply just create a docker-compose file and save it as docker-compose.yml in the same location where you have your config file. 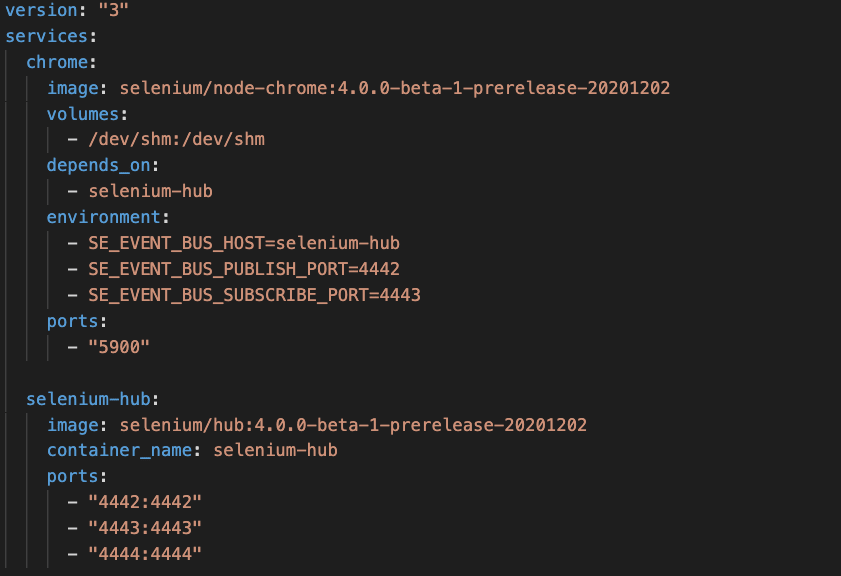 If you want to know more about the Docker compose file and what you should know please refer to step 7.

Running your docker container. This can be done again in 2 ways based on what you have chosen in step 3.

If you have chosen Option 1, then follow the commands provided in the description provided in the same URL. This is definitely a viable option if you just want to experiment but this has its limitation and inconveniences

That's why I would always recommend Option 2 which is through docker-compose. If you have chosen this option, All you have to do is type one command after going to the location where you have placed the docker-compose.yml file.

In case you have the filename as something else e.g. abcd.yml then

Note: -d here is to run the container in a detached mode.

If the setup is successful it should like this

Now, all the setup is done. You can see 3 chrome nodes in the Selenium hub and once you trigger the scripts you can see the execution will begin in the containers.

If you want to see how the scripts are triggered visually, you can do so by setting up your VNC server and VNC viewer.
The command below shows all the containers that are running and their IP address and the ports.

So to see a specific container take up the port and enter in VNC viewer and then it will ask for a password.
The password is secret

There are a lot of things that one can learn about docker-compose but I will limit this to what we should from an automation perspective.

When we scale the nodes it's kind of imminent that we don't use the same port number more than once. To avoid that, we have 2 options,

If we want to spend less time troubleshooting different ports that are currently in use, I would strongly suggest to leave it to docker.

However, in the second part where we specify the port inside the docker container that's what the official image has but you change it or leave it as it is.

I will stop here, hope you found this useful!