Disclaimer: I have tried to do a lot of research on this topic but I am not 100% sure if everything aligns right. I can say that I am 92% sure. Also this is my personal view and we can have different opinions on a specific topic so feel free to jam pack the comments section if you feel different. Also DAO and blockchain are banned in some countries so please refer to your federal laws before making a DAO.

The world that we live in today has the Internet that we call home. We tend to do most of our work on the Internet nowadays. People shop, relax, watch, sing, stream and sometimes even marry online. This world has been starting to adopt code, computers to do a lot of work for them and now we have a new kind of AI which might even do jobs that normal humans were doing in the past. So if the world is adopting computers so much then why don't we have organizations or companies that are not headed by a single person or board but are head by code and people decide what the company needs to work upon.

Let me tell you some key aspects where we have differences between centralized/legacy organization and decentralized autonomous organization.

Decentralized Autonomous Organization(DAO) are self governing organizations which are not affected by things that happen around the world. They are operational software with the by-laws that are immutably written on the blockchain and are not in the hands of its creator. These organizations are created by like minded people with an agenda/goal on a specific project. Its Identity is made through consensus and its authority is made by voluntary endorsements and network effects.

A DAO is only a software and can not sweep streets, make games, manufacture steel from iron ore. So we need real world people that work. They are called Contractors.

DAO can have an apt amount of Contractors. It all depends on the task. Contractors would submit a proposal for development of products and services. These are smart contracts which have English descriptions. For security reasons we have a group of signatories that validate the proposal and only after that, Contractor is entitled to receive ether(ETH) from DAO. This group of signatories are collectively known as Curator and for decentralization the Curator can be dismissed at any time by DAO and for any reason. These decisions might look rash but these are taken by voting of all the participants of the DAO.

People wishing to be a part of DAO can purchase DAO tokens in exchange of ETH and other crypto currencies which then gives them the power to vote(vote power is proportional to the amount of DAO tokens purchased) on proposals as well as receive the benefit of output of the work done by Contractor's proposals.

Debates on proposals can take place on/off chain through a service chosen by the DAO community(for example - slack, gitter, discord and telegram etc),It is also possible for the community to select a replacement Contractor for any proposal, so the work can begin from where it stopped and not left altogether due to a specific Contractor. 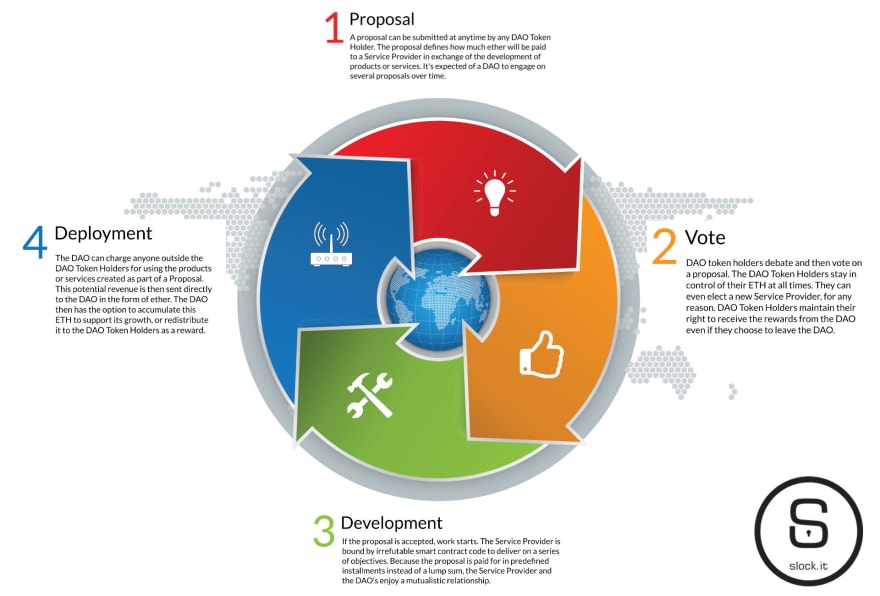 DAO can take actions on the Contractor and the Curator. DAO can be commanded to use its power for these actions-

This is done after a rigorous debate. This might take some time but a good decision always takes time. The amount of minimum participation rate needed for signing off a proposal is proportional to its intensity of operation for DAO or the value it has to offer to DAO.

Proposals can have a variety of complexity.From being really simple to being super complex. For example - a DAO can realize a trust factor issue and can only give money (ETH) to the Contractor on a monthly basis instead of providing the whole sum at a time. Another example is that it can send money to one or many accounts simultaneously where these many accounts represent a trusted individual who contributes to some part of the proposal or the project.

Proposals can also have operational parameters for example - they can have charges imposed when a non-token participant is using a service or product made by DAO. The charge is fixed by DAO in the initial stage of the product's proposal.

These features allow code representing DAO(smart contracts) to stay immutable, be secure and flexible at the very same time. Also with the option to change business model or dismiss Contractor leads to a smooth pivot which is not seen in a legacy organization.

The above image shows how we have a hierarchy in a legacy organization and how an open community can be more beneficial for an organization to take decisions.Just like we have transitioned from a monarchy system to a democratic model of state governance, we should also try to adopt a democratic governance inside our big corporations and companies too.

We have seen that the biggest threat to any distributed system like this is the 51% attack. Usually this attack emerges from the idea that a person with 51% of all the token can give any power of DAO to him/herself.This might even lead to transfer of 100% ETH to him/herself, So it is more like becoming a dictator inside a distributed platform like DAO which should not be possible. In such cases DAO is dissatisfied with the Curator, they might even change the Curator. Changing the Curator with voting takes place with a special flag and its voting is done in two rounds. The first round of voting is done as an informal round for changing the Curator. Then a second round of voting is done to seal the decision on changing the Curator by the DAO token holders. They have two choices, either to change the Curator or to split the DAO into two, so that they do not lose their money that they had initially invested in DAO token with ETH.

If a split occurs then the DAO token holder initially would receive the benefits of the proposals that are in work before the split and they would retain their ETH which will be transferred to the new DAO as new DAO tokens. After the split both the DAO would continue to be operational with their own Curator and Contractor. This is somewhat equivalent to a big corporation splitting into two companies. 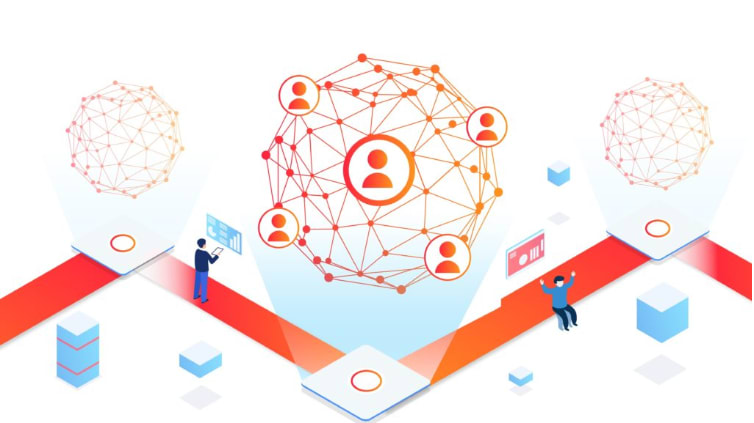 We learned that DAO is more or less an organization which is designed to sustainably develop diversified crypto-assets and products/services backed by some crypto assets(ETH). These accrue value for DAO members who invest in DAO for the initiative they want to pursue. It is like a clean capital pool with the agenda to make everything autonomous with code and try to make an organization which is not influenced by the mishappenings or politics of the outer world but at the very same time is global.

Once suspended, 3scava1i3r will not be able to comment or publish posts until their suspension is removed.

Once unsuspended, 3scava1i3r will be able to comment and publish posts again.

Once unpublished, all posts by 3scava1i3r will become hidden and only accessible to themselves.

If 3scava1i3r is not suspended, they can still re-publish their posts from their dashboard.

Once unpublished, this post will become invisible to the public and only accessible to Hritwik Tripathi.

Thanks for keeping DEV Community 👩‍💻👨‍💻 safe. Here is what you can do to flag 3scava1i3r:

Unflagging 3scava1i3r will restore default visibility to their posts.