Good day, today we are going to build a fully CRUD system (Web & API). API is a software intermediary that allows two applications to talk to each other. Somethings you might need to create an app that can be run on different languages or frameworks, for example, you can use Laravel to create the backend for your application while the frontend might run on any JavaScript frameworks. API allows two or more programs to communicate with each other.
There are different types of APIs, but today we are going to concentrate on RESTful APIs. REST stands for Representational State Transfer, while API stands for Application Programming Interface. You can read more about API from the internet or other programming material.

We'll use a laravel package called Laragine, this package helps us to create a fully CRUD system by just writing simple commands Without saying much, let's dive into it.

Laragine is a laravel package which was created to manage your large laravel app using modules, let's say that you'll build a blog the blog consist of (post - comment - like), blog-> is a module, (post - comment - like) -> called units *laragine built the module & units with all CRUD functionalities also built *(Migrations - factories - tests - controllers - models) all you have to do is to just include the link in route files, awesome, right!

In this tutorial, we'll just create a post for a blog with fully CRUD functionalities so we'll create a module called blog then we'll create a unit called post

To install the latest laravel framework, which is laravel 8.0 as of the time of publishing this article, run the command below
composer create-project --prefer-dist laravel/laravel laravel_8
This will automatically create a laravel 8 app and some couple of things have been set up, we don’t need to copy and rename the env.example file, Laravel 8 does that automatically for us.

Another important thing about Laravel 8, you don’t need to generate APP_KEY, this new version will also generate it for us.

With that all set up, our app is ready.

Create an empty database, Open the .env file, and update your database configurations.

After including Laragine, you have to install it by running the following command:
php artisan laragine:install
it's an initial command for Laragine

After running the command, the Laragine directory will be in the root directory under core directory. 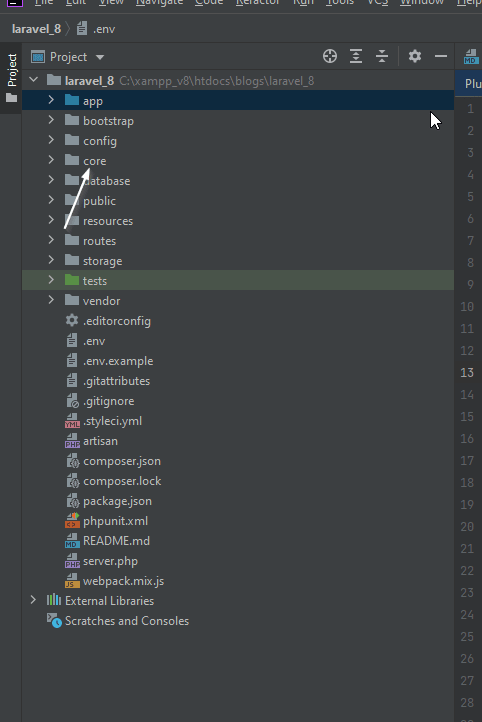 Run the following command and specify the name of the module in our case will be blog
php artisan laragin:module blog

Any module will be added under core directory
After running the command, the **blog** directory will be in thecore` directory. 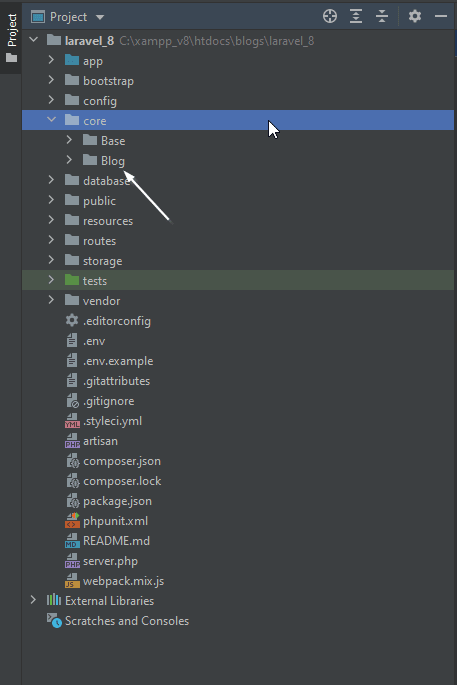 Second command:
it's the same command without init option, the command will automatically create all the following files depending on the data that we specified in the JSON file.
1- Migration
2- Requests
3- Resources
4- Factories
5- unit tests

We include --init because it's the first part of unit command
After running the command it'll generate the basic files Controller (API - web) - Model & also the JSON file that we'll write our attributes in it. 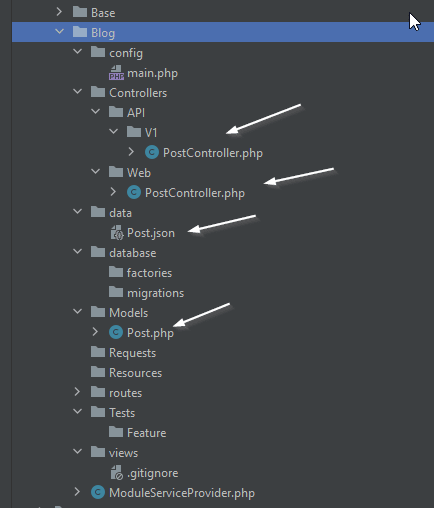 Now let's go to the JSON file which is in core/blog/data/Post.json to write our attributes.

we shoul follow rules when writing any attriubte in JSON file, there are two types of configuration type & mod 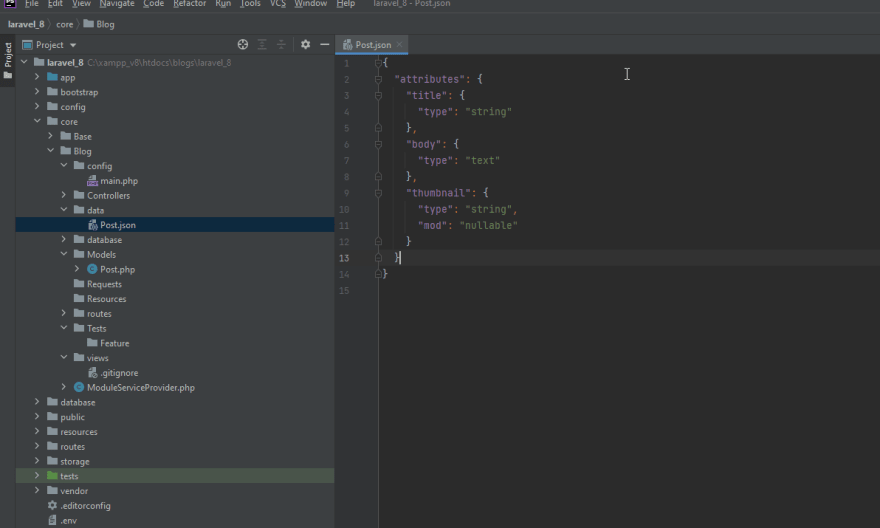 if you realized that I didn't write required because the package will add it automatically.

let's see the migration file, you'll see all attributes are added automatically with the configuration that we specified in JSON file, magic, right🧐! 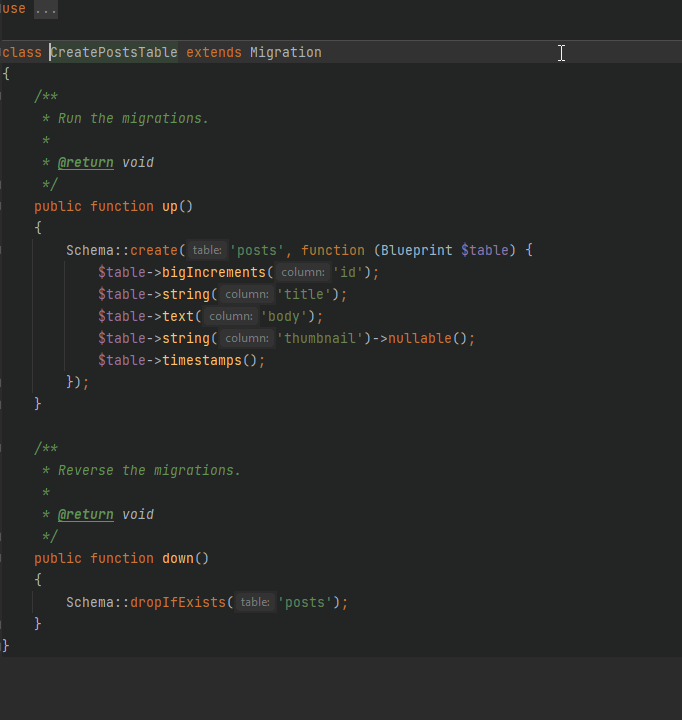 you can modify any attribute you want in request file or in any other file Resources - unit test - etc... 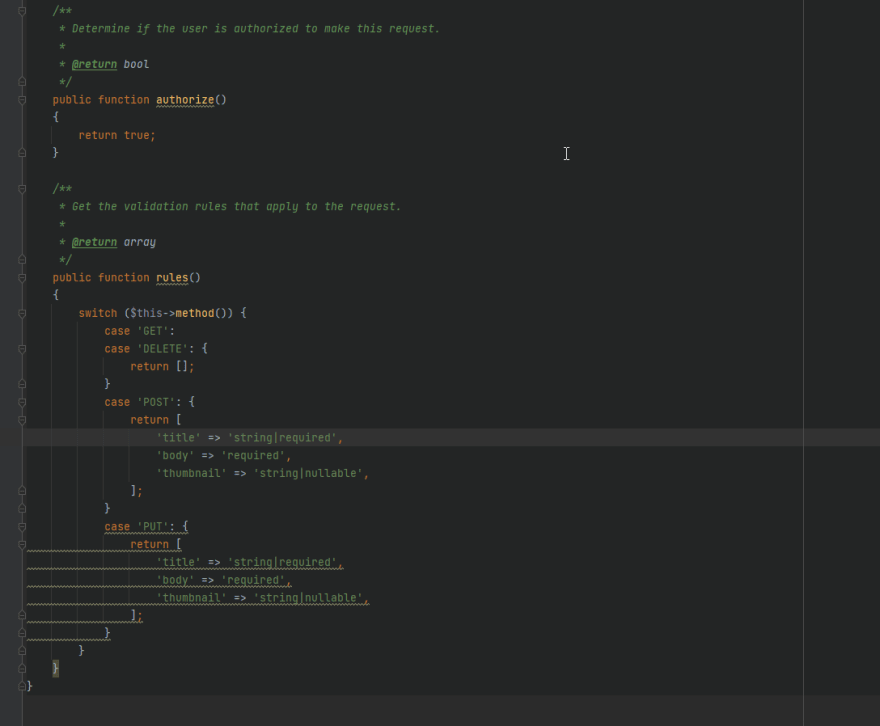 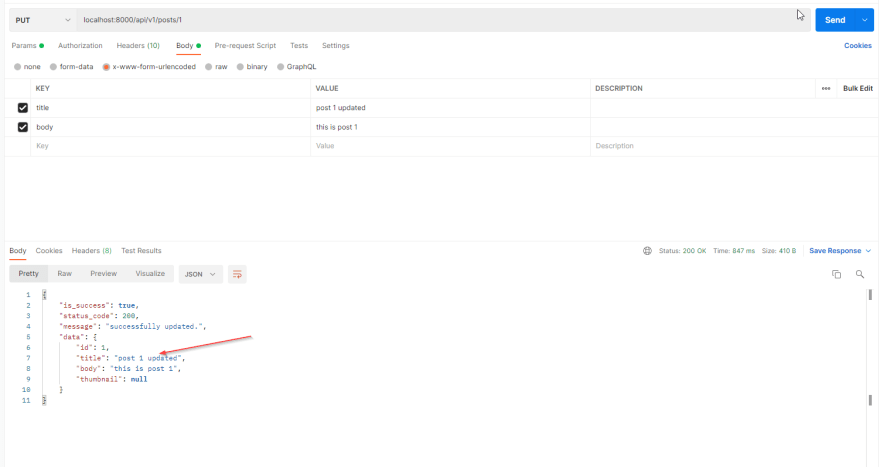 in this article I just showed you one feature of Laragine package, in the next tutorial I'll teach you how to use
unit tests by just making a small configuration.