Do you know the test automation market is all set to hit $35 billion by 2026? And when it comes to cross browser testing, JavaScript leads from the front? Javascript is probably the best alternative for Selenium automation, considering its protocol transformation to the W3C standard. In order to make the most of it, the first step is to choose the best test automation frameworks. Among all the JavaScript testing frameworks, two frameworks are most popular- Nightwatch and Protractor.

This article will be comparing Nightwatch vs Protractor and help you choose the perfect JavaScript testing frameworks. Let us start by diving deeper into each framework.

Nightwatch.js is a free automation test framework for websites and web apps. It is written in Node.js and also utilizes the W3C WebDriver API. Nightwatch is an end-to-end testing (E2E) solution that aims to simplify writing automation tests with Javascript for browser apps, web-based apps, and websites. It is one of the most popular test automation frameworks that functions by communicating over a restful HTTP API amid a WebDriver server (like Selenium Server or ChromeDriver).

Nightwatch relies on Selenium and offers various assertions and commands within the framework to carry out operations on the Document Object Model (DOM) elements. The protocol is clearly defined by the W3C WebDriver specification (mainly originated from JSON Wire protocol). The newest version accessible in the market is 1.0.

Why Is Nightwatch.js So Popular?

Before we dive into Nightwatch.js features, pros, and cons, it is significant to understand the reasons behind this testing framework’s fame. Nightwatch.js facilitates end-to-end functional browser tests in a pure Node.js environment, which allows testing of web apps independent from third party software.

The key reason for robust and lightweight test automation frameworks like Nightwatch is facilitating a single integrated solution for app tests. As this automated testing framework is built on Node.js, it has several benefits over any other Selenium test automation tool. The browser tests powered by Nightwatch.js remove the dependency upon third party software, which improves data integrity amongst varied system components.

To compare Nightwatch vs Protractor, we must understand the features of both of these JavaScript testing frameworks. First, let us dive deep into the core features offered by Nightwatch.js:

Apart from all the attributes mentioned above, it is also famous for having an easy and straightforward syntax, making it simpler to write the tests rapidly and effectively using XPath locator and Node.js CSS selectors in Selenium.

Nightwatch is one of the most popular test automation frameworks for websites and web apps. The core benefits of using Nightwatch as the preferred JavaScript testing framework are as follows:

Nightwatch is advantageous for end-to-end test automation as it allows us to write all-inclusive tests in Node.js effortlessly and rapidly. It makes the entire process of test automation and continuous integration much more seamless. Nightwatch lets us configure the Selenium test suite and enables parallel testing that additionally controls the build time.

Why Choose Nightwatch Over Other JavaScript Testing Frameworks?

Selenium is the most in-demand automated testing framework as it offers support for cross browser testing, numerous programming languages and is also used in both the mobile app and web app tests. However, Nightwatch completely utilizes JavaScript as the programming language for comprehensive tests, which has the listed benefits:

How Does Nightwatch.js Work?

To execute any operation, i.e., either an assertion or command, Nightwatch typically requires sending fewer than two requests. It functions as follows:

You will notice the Node.js version. This must also install the node package manager (npm). To confirm it, type the following:

The npm version will be prompted.

Selenium WebDriver for popular browsers can be downloaded from the links given below:

To run your tests on several browsers you may use a cloud Selenium Grid.

There are some significant things which you require to manually install:

You also require a nightwatch.json configuration file to allow this test framework to know how it must run.

Once you have installed all the required tools, you can start running your tests using this command:

In this section of Nightwatch vs Protractor comparison, we will look into the pros and cons of using Nightwatch as your preferred JavaScript testing framework.

Now that we have understood what Nightwatch is, it is time to dive deeper into Protractor. This will give us a deeper insight into the Nightwatch vs Protractor comparison.

Protractor is one of the crucial automated and JavaScript testing frameworks. It is most commonly used as an end-to-end behavior-driven testing tool, specifically for AngularJS. It functions as a Solution integrator combining robust technologies and tools such as WebDriver, Jasmine, Cucumber, Mocha, Selenium, etc. The Protractor framework’s objective is not merely to test AngularJS apps but also to write automated regression testing for normal web apps. Google Developers originally developed it for supporting Angular apps, and later it was launched as a free framework.

Currently, Protractor supports both Non-Angular and Angular apps. It is one of the most popular JavaScript testing frameworks and is written on top of Webdriver.js. Thus, in addition to Angular-specific traits, the entire feature set supported in Selenium Webdriver is maintained by it. It gets a little tricky to identify web elements in the AngularJS app, and Selenium WebDriver often fails with HTML attributes like ng-model or ng-controller. This is where Protractor has the upper hand as it helps control those components and test the actual functionality.

Why Is Protractor So Popular?

Protractor acts as an e2e test framework for both non-Angular and Angular apps that don’t use CSS elements. Automating web apps built on AngularJS by making use of this tool is a crucial step forward for companies in their efforts to automate the business process. It does not require you to add sleeps and waits. As the webpage completes pending steps, Protractor executes the subsequent moves of the test case by automatically linking with the AngularJS app. Additionally, it is quite simple to install page objects.

This angular framework does not execute WebDriver commands till action is required, e.g., installing page objects so that script can operate on-page elements without affecting the HTML. Protractor also assists in Angular-specific locator strategies as well as native WebDriver locator tactics.

In this section of the Nightwatch vs Protractor blog, we will understand Protractor’s most crucial features. It has the following core features:

Next up in this Nightwatch vs Protractor blog, we will be looking at reasons to consider while switching from other test automation frameworks to Protractor. This open-source E2E JavaScript testing framework provides the following benefits −

Why Choose Protractor Over Other JavaScript Testing Frameworks?

We are all aware of the fact that almost every kind of app is using JavaScript for software development today. A QA engineer’s job turns very tricky when JavaScript enhances in size and becomes complicated because of the rising number of JS-based apps. A majority of the time, it turns into a challenging situation due to an inability to locate the web elements in AngularJS apps using expanded HTML syntax or using Selenium WebDriver or JUnit.

Selenium WebDriver is unable to search AngularJS web components. This is because AngularJS apps use some expanded HTML elements like ng-model, ng-controller, ng-repeater, etc., which aren’t counted in Selenium locators.

Therefore, the significance of Protractor comes into play as this framework can easily control and manage those extended HTML components in AngularJS web apps. While most frameworks concentrate on executing unit testing for AngularJS apps, Protractor is used to perform tests of the app’s real functionality

How Does Protractor Work?

This framework is one of the select few JavaScript testing frameworks built on top of WebdriverJS. It is a Selenium-based test framework which allows Protractor to integrate with Selenium WebDrivers and server like SafariDriver, GeckoDriver, ChromeDriver, etc. to imitate the user activities.

Subsequently, it also offers support for several assertions frameworks like Mocha, Jasmine, etc. This assertion framework allows you to verify or validate the values; in turn, the testing will be marked as fail or pass. In simple words, Protractor, Selenium Server, WebdriverJS, Assertion Framework, and Browser Driver give the infrastructure to write and execute our E2E (end-to-end) testing

Afterward, it is better to scrutinize the compatibility notes in the Protractor README to make certain your Node.js version is perfectly compatible with this framework. However, by default, this framework uses Jasmine for its test interface.

In contrast to Nightwatch, one does not have to install Selenium manually as it comes in-built in Protractor. But, it does require ensuring the browser driver versions are latest and updated. Use this command-

For performing the testing, we have to begin the Selenium server firstly earlier than we are capable to run Protractor.

In hindsight of the Nightwatch vs Protractor comparison, the setup procedure is somewhat simpler than Nightwatch.

Before moving on to the final comparison between Nightwatch vs Protractor, let us take a look at what Protractor has to offer. Listed below are the pros and cons- 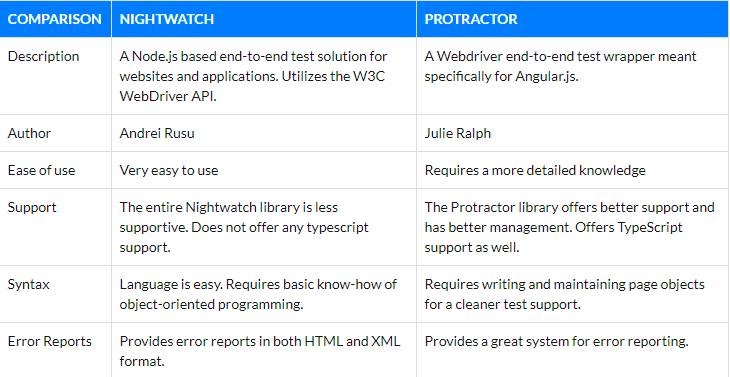 When it comes to choosing between Nightwatch vs Protractor, it is a tough call to take. Using Protractor with Selenium is better if one needs to carry out full E2E testing that opens a browser and executes a DOM manipulation. Besides, Protractor is particularly better for angular applications. On the other hand, in test automation frameworks like Nightwatch, asserts are prepared automatically. It also creates a test report automatically plus keeps it in a directory.

Remember that Protractor also offers an impressive set of features, especially when some components are not easy to detect and require an element explorer. If you are working on Angular, the project is not big, and Chrome is the prime browser—look no more! You can make use of Protractor. As Protractor is rooted in WebDriver, cross browser testing would not be any problem at all. Additionally, you can use cloud-based cross browser testing platforms like LambdaTest to take advantage of a Selenium grid cloud for test execution. It lets you perform tests on a combination of 2000+ browser and operating systems.

Before selecting a framework, understand the development technique and testing criterion. Once done, pick out the framework that suits your requirements. We hope this will help you pick the right test automation framework.

Once suspended, aboywithscar will not be able to comment or publish posts until their suspension is removed.

Once unsuspended, aboywithscar will be able to comment and publish posts again.

Once unpublished, all posts by aboywithscar will become hidden and only accessible to themselves.

If aboywithscar is not suspended, they can still re-publish their posts from their dashboard.

Once unpublished, this post will become invisible to the public and only accessible to Abeer Mishra.

Thanks for keeping DEV Community safe. Here is what you can do to flag aboywithscar:

Unflagging aboywithscar will restore default visibility to their posts.