Along with pattern matching, one of the coolest things in Erlang and Elixir is their concurrency implementation based on Actor Model. In this article I introduce concurrency and show how we can start making our code concurrent in Elixir, using processes.

We can think of concurrency as dealing with multiple things happening, and progressing, at the same time.

Concurrency is not to be confused with parallelism. They are two different concepts that sometime are used like synonyms. We can have multiple things running at the same time on just one CPU (or core); they progress together, but they are not executed in parallel.

Concurrency is the composition of independently executing things, typically functions

Parallelism is the simultaneous execution of multiple things, possibly related, possibly not

Rob Pike - Concurrency Is Not Parallelism﻿

Once we are able to split our problem into sub-tasks, and make it concurrent, we are then also able to take advantage of multiple cores and run the different sub-tasks in parallel.

To make our code concurrent in Elixir we use Erlang processes.

If you are coming from programming languages like Ruby, Python or Java, you may have used threads to make your code concurrent.

I developed for many many years with Ruby on Rails framework and I really love Ruby, they both made a joy developing services. In the last five years I've also used Python quite extensively, especially to take advantage of the fantastic machine learning libraries that Python community has.

But if you developed with one of these two languages you maybe know they have something called GIL (global interpreter lock). In short, the GIL ensures that only one thread at a time can access to the shared memory. Don't get me wrong, the GIL makes easier to write thread-safe code, but it also makes really difficult to write code that can scale out running in parallel on multiple cores.

These languages were not built with concurrency as the main goal. And concurrency is not just matter of scaling out, it's for modelling the real world, which is mainly concurrent. The Erlang and Elixir concurrency model brings isolation, fault-tolerance and a great way to coordinate and distribute processes.

Erlang processes are emulated in the Erlang VM, like Green threads - we like them since this simplifies many problems - other languages prefer efficiency - we want things like dynamic code upgrade which is difficult with native threads. twitter.com/pankajdoharey/…
(identity '[:pankaj :λ]) @pankajdoharey
@joeerl Are Erlang processes Green Threads ? And if so why does every VM community tries to abandon them (i.e Java) and Erlang embraces them?

The reason because Erlang and Elixir are highly concurrent, is because processes are so cheap that is possible to easily spawn thousands of them, without using all the memory.

Since the web Phoenix Framework is built with Elixir, it inherits its highly concurrent nature. The phoenix core-team ran a test few years ago showing how they got 2 millions active WebSocket connections on a 40 cores, 128GB ram machine.

So, since an Erlang process is lighter than a thread and a OS process, why is it called a process?

the term "process" is usually used when the threads of
execution share no data with each other and the term "thread"
when they share data in some way. Threads of execution in Erlang
share no data, that is why they are called processes).
http://erlang.org/doc/getting_started/conc_prog.html

Let's see something in practice.

Let's consider this example. We have a simple get_price function that makes an HTTP request to get a cryptocurrency price from the Coinbase API.

The function uses HTTPoison and Jason to get the price of the given product_id.

We also add a second function to the module

print_price(product_id) helps us to see how much time get_price(product_id) needs to request the price to the API and return with a result. We simply surround the function with a start and stop timestamps and then calculate the difference to get the number of seconds elapsed.

Since both our functions accept a product_id, we can use them to get prices of multiple products. For example, for Bitcoin (BTC-USD), Ethereum (ETH-USD), Litecoin (LTC-USD) and Bitcoin Cash (BCH-USD).

Or in a nicer functional way

Running these requests we get the updated prices along with the time needed to complete each request.

Each single product is requested sequentially. We first request for BTC-USD and wait for the response, then we request for ETH-USD and so on... 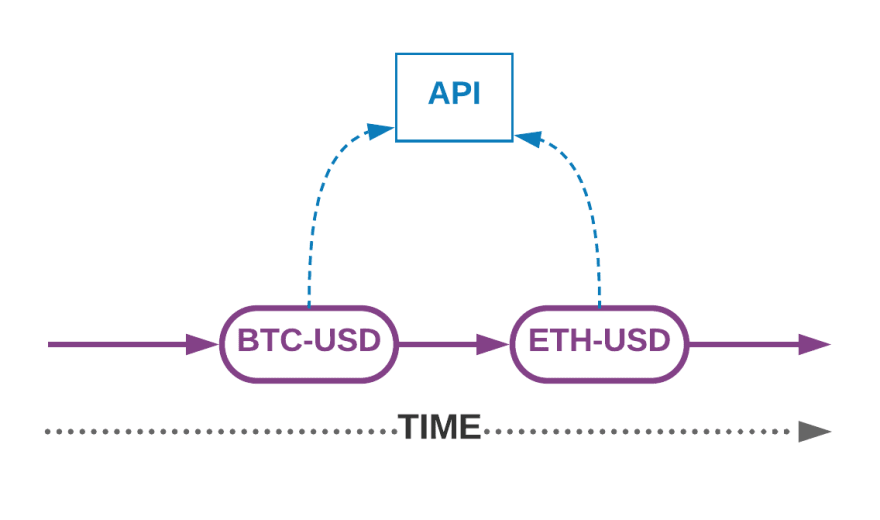 The problem with making requests one after the other, is that in this case there isn't much computation happening and our computer is idle most of the time just waiting for the response from the server.

So, how can we request the four prices together, without each request has to wait that the previous one has finished?

With the spawn/1 function we can easily make the previous requests concurrent, so each request is made and carried out at the same time.

The spawn(func) function creates an Erlang process, returns a PID (a unique Process ID) and runs the passed function inside this new process.

We use the PID to get informations about the process, interact and, most importantly to communicate with it (which is something we will see in next articles)

So, let's make our requests concurrent, running each one of them in its own process. 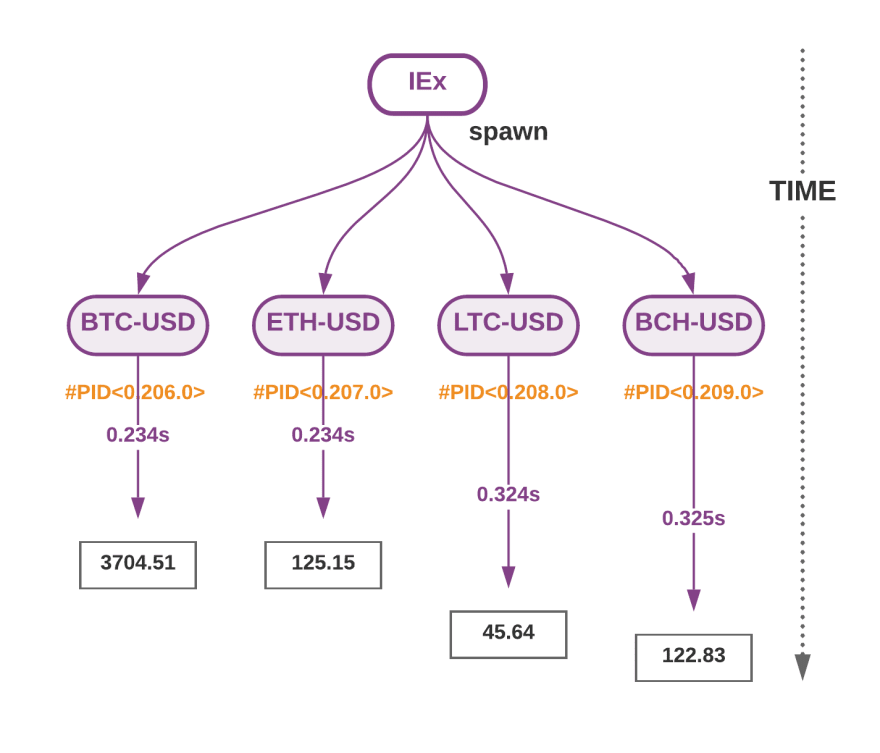 This time each request is made at the same time. The Enum.map function enumerates the products list and spawns a new process for each product in the list, running the Coinbase.print_price(product_id) function in it. The result is a list of PIDs.

We saw how easy is to spawn processes and making our code concurrent. But this is just the beginning. We had to print the results because the spawn/1 function returns immediately a PID, and we weren't able to get the result in a traditional way. To coordinate with processes and communicate with them we still need to inspect an important piece of the puzzle: message passing, which I will cover in the next article.

The REAL implementation of Firebase Cloud Messaging on the Backend side

Once suspended, alvisesus will not be able to comment or publish posts until their suspension is removed.

Once unsuspended, alvisesus will be able to comment and publish posts again.

Once unpublished, all posts by alvisesus will become hidden and only accessible to themselves.

If alvisesus is not suspended, they can still re-publish their posts from their dashboard.

Once unpublished, this post will become invisible to the public and only accessible to Alvise Susmel.

Thanks for keeping DEV Community 👩‍💻👨‍💻 safe. Here is what you can do to flag alvisesus:

Unflagging alvisesus will restore default visibility to their posts.