our first stop will be at HUB,

A hub is a network equipment with several interfaces (also called ports, not to be confused with TCP or UDP ports since these are physical ports where you can connect cables).

Now that we know what a HUB is let us discuss the problems and why we don't use hub now a days. Consider two device in network connected using HUB transmit at the same time.

Here H3 will get a corrupted signal and ask for re-transmission. As number of devices to hub increases the chance of getting collision increases as well which essentially reduces the efficiency of the network. Inorder to deal with the loss of signal the end systems have to come up with schemes to reduces the chance of collision since hub is unintelligent device(all it do is repeat the electrical signal). One of scheme is CSMA/CD.

I will give a simplified idea of what CSMA/CD is.

Now that we know what a HUB is it is time to define collision Domain more formally.

A collision domain the part of a network where packet collisions can occur. A collision occurs when two devices send a packet at the same time on the shared network segment. The packets collide and both devices must send the packets again.

So in HUB all the devices that are connected are in the same collision Domain.

What i meant by same collision domain will be clear after reading about Bridge.

Bridge devices work at the data link layer of the Open System Interconnect (OSI) model, connecting two different networks together and providing communication between them. Bridges are similar to repeaters and hubs in that they broadcast data to every node. However, bridges maintain the media access control (MAC) address table as soon as they discover new segments meaning that it uses the MAC address information to make decisions regarding forwarding data packets. Only the data that needs to be sent across the bridge to the adjacent network segment is forwarded. This makes it possible to isolate or segment the network data traffic.

Here is an example of two network connected using bridge.

Bridges and Switches are pretty similar, both operate at the Data Link layer (Layer 2) and both can filter data so that only the appropriate segment or host receives a transmission.some of the difference between them are 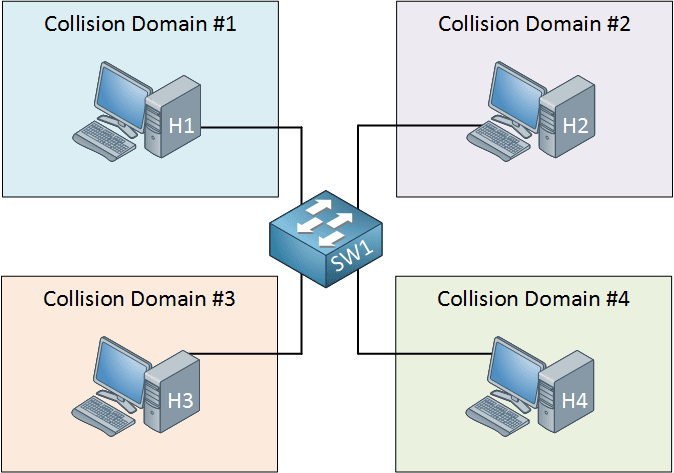 Up until this point we have only discussed about collision domain its time to introduce broadcast domain and why we need that.

In computer networking, broadcasting refers to transmitting a packet that will be received by every device on the network.Broadcast helps to attain efficiency when a common data stream needs to be delivered to all, by minimizing the communication and processing overhead.

The Address Resolution Protocol (ARP) is a communication protocol used for discovering the link layer address, such as a MAC address.When a IP packet comes a (layer 3) switch checks whether the destination IP address is in the routing table if it could not find an entry mapping the MAC address with the IP it sends (broadcast) an ARP message to all the connected device asking " Does anyone have this IP " if a node have the particular IP it reply else it ignore. Important point that must be carried from above example is that at most only node will have a matching IP address all other nodes receiving the packet just ignore the message which waste the valuable time for sending and processing the ARP packet.

All the devices we discussed so far has only one broadcast domain that means packets like ARP will be transmitted across all interface.

A router is a device like a switch that routes data packets based on their IP addresses rather than MAC address. Router is mainly a Network Layer device.When a data packet comes in on one of the lines, the router reads the network address information in the packet header to determine the ultimate destination. Then, using information in its routing table or routing policy (is a data table stored in a router or a network host that lists the routes to particular network destination), it directs the packet to the next network on its journey.

How does a Router split Broadcast domain ?

A router receives packets from each interface via a network interface. Received packets have all link protocol headers removed. The router uses the information in the IP header to decide whether and where to forward each received packet, and which network interface to use to send the packet. Most packets are forwarded based on the packet's IP destination address , along with routing information held within the router in a routing table. A router does not by default forward a packet with an IP broadcast address.

Let me elaborate on that consider a broadcast frame (we usually call packets at link layer a frame) reaches a switch the frame, being determined as a broadcast, would be forwarded out all interfaces except the one it originated from.

how does a switch know it is a broadcast frame ?

what happens when a broadcast frame enters a router ?

the frame gets decapsulated from link layer and passed up to the network layer and destination IP would be 255.255.255.255 (referring to the current network). The router does not forward such packets hence it split the broadcast area (domain).

The Reduplication Of The Mare

What Is Jumper's Knee?

Arjun U S
Hello peeps nice to see you all hope you are having a nice day
Music Monday — What are you listening to? (Rock Edition 🤘)
#watercooler #music #discuss
What Makes You Stay In A Community?
#discuss #community #watercooler
Why your GitHub profile should stand out?
#github #beginners #career

Once suspended, arjunumesh11 will not be able to comment or publish posts until their suspension is removed.

Once unsuspended, arjunumesh11 will be able to comment and publish posts again.

Once unpublished, all posts by arjunumesh11 will become hidden and only accessible to themselves.

If arjunumesh11 is not suspended, they can still re-publish their posts from their dashboard.

Once unpublished, this post will become invisible to the public and only accessible to Arjun U S.

Thanks for keeping DEV Community 👩‍💻👨‍💻 safe. Here is what you can do to flag arjunumesh11:

Unflagging arjunumesh11 will restore default visibility to their posts.