People like to share their opinions. They do it in the comments, articles, in their speech, even the text you are reading now is an opinion of the one who wrote the post. It is alright to have an opinion, to think about reality, map the teritory of surrounding world and stuff in it then sharing your map with others. Expressing your thoughts to others and getting their mind on some topic is a valuable element of societal development and aids us all.

Onion of opinon, crying up for help

Although, shielding yourself and your opinion from the possible criticism and serious consideration by other people is not alright. Quite frequently I see people start their posts or comments with IMHO disclaimer followed by actual material they want to share with the world. This is wrong on many levels. 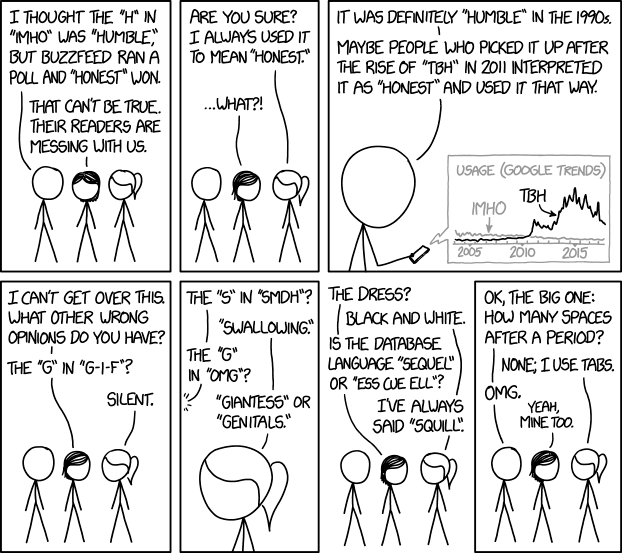 IMHO serves as training wheels of idea, saying to the world - don't judge me, it is just an opinion and may be wrong. It discourages people from getting into discussion and taking the opinion seriously. Why even start expressing the thought if you are not certain that you can protect and/or adjust it if someone points at some warts of your theory?

Being unsure of some things in your worldview is normal as far as you point at the explicitly and explain the uncertainty you have about them. Such explanation may be a foundation of fruitful conversation and aspire people to get their mind on an issue. IMHO is different, it is a kind of discussion-stopper that does not pose any questions to ask being only a stop sign. It does not explain anything, it simply shows that person is reassuring to avoid an attack on their ideas and building a safehouse of (rather helpless) humility.

It is a way of lazy thinking that leads to slippery ice of subjectivist fallacy. If this is only your opinion and not an idea you want to show to be true, you can just hop through the steps required to make it credible, you can claim that truth in this context is relative because we speak about opinions and not facts and deflect any criticisim with a shiny shield of relativism. It is a magic wand of ignorance that should not be used by any measures. Some subjectives are better than the others and there is a measure to it which is disbanded by this four letter abbreviation. Some ideas are better than the others and giving every idea a participation prize we don't get closer to the truth and practicality. We harm them.

Baby, don't do no harm

Stand for your ideas, be brave to mistake and correct your hypothesis until you reach a level of certainty that makes an idea good. But please, don't shell up with being humble as this does not help you to get closer to the truth.

P.S. This is my opinion, but I don't regard it as humble and ready to discuss it.

Once suspended, arturmartsinkovskyi will not be able to comment or publish posts until their suspension is removed.

Once unsuspended, arturmartsinkovskyi will be able to comment and publish posts again.

Once unpublished, all posts by arturmartsinkovskyi will become hidden and only accessible to themselves.

If arturmartsinkovskyi is not suspended, they can still re-publish their posts from their dashboard.

Once unpublished, this post will become invisible to the public and only accessible to Artur Martsinkovskyi.

Thanks for keeping DEV Community 👩‍💻👨‍💻 safe. Here is what you can do to flag arturmartsinkovskyi:

Unflagging arturmartsinkovskyi will restore default visibility to their posts.