I came across some issues on touch screens where I have a navigation menu expanded and the common "shadow" showing on the non-menu portion of the screen. When I tried tapping on the "shadow" to close the menu, way too many things were happening! Here's a quick illustration of what sort of screen I'm talking about: 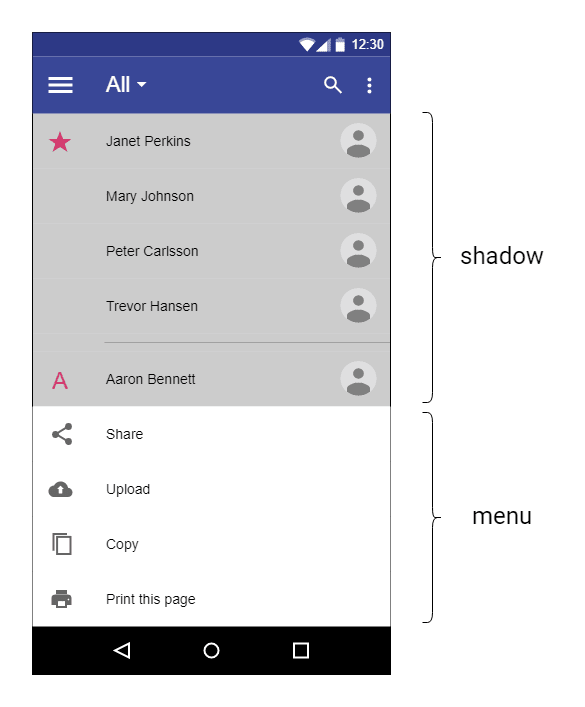 When a user taps on the "shadow" portion of the screen, they expect the menu to close. Nothing else should happen. You can handle this by adding a touchstart event listener to the element used for the shadow, but there are a couple of things to watch out for. It won't behave the same as a click event listener you use for the desktop version of your app.

It's all about when events are fired. A click event doesn't go until after a click is over and a mouse button is released. So, when a user clicks on the "shadow" with their mouse, there aren't any side effects. It's a different story for touchscreens, however.

If the items "behind" the "shadow" are clickable, a user touching the "shadow" to close the menu will also cause fire off the click events on those items. It's a pretty simple fix. In your touchstart listener, all you have to do is call preventDefault on the event passed into the listener. It might go something like this:

It's really that easy—a one-line fix. It wasn't super obvious to me at first, so I hope this helps clear things up for anyone else in the same boat as me. Have you ever run into similar issues? If so, enlighten us in the comments and save us some pain! :)

If you want to get notified when I publish new blog posts or make major project announcements, head over to https://ashleemboyer.com/newsletter.

Schema-first or Code-first in GraphQL

33 GitHub projects I have bookmarked and you should