When you try to search for some code-coverage solution that can utilize Github actions, you will definitely stumble upon two major players Coedcov and Coveralls. But both of them are proprietary and comes with an extra cost attached to it. When you are working on a personal project or an early-stage startup you don't want to spend extra bucks for the same.

So I designed this action which makes use of action artifacts to generate coverage reports and comment them on pull-requests. It also has a feature to upload reports to a file server. I used the same for managing a very data-intensive Django project. With my test-suite workflow, I used coverage.py to generate reports. I store these reports in a text file in actions-artifacts and also upload them. There is a little preprocessing done on the report to make it comment friendly.

The whole process is divided into two parts: 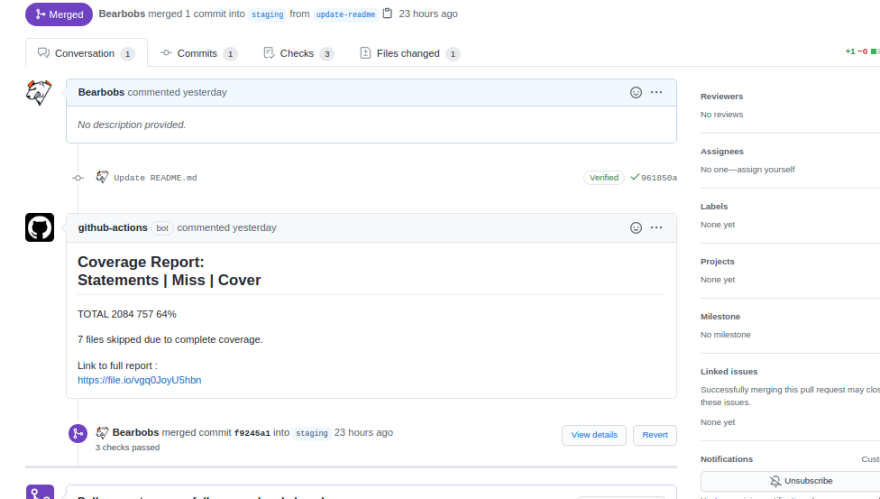 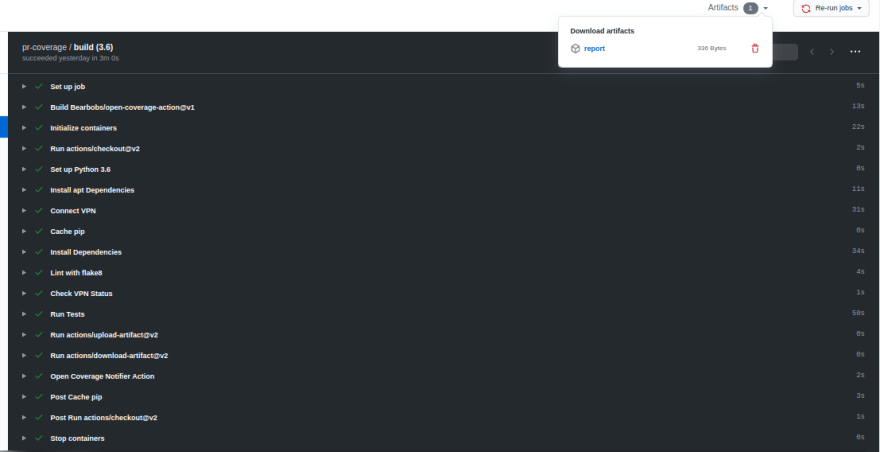 the first part was fairly simple, I used coverage.py to run standard Django tests.you can find the syntax in the Yaml file below. For the second part, I created a new action repository open-coverage-action, It takes a text file as input and comments it on a pull-request. I am also working on adding preprocessing of the report to it. Currently, it uses basic bash to extract the part which contains the final result and add some polish, after that stores it in a new file for open-coverage-action. I also use file.io to upload a full report for further reference and also upload-artifact action to upload it as a an artifact.
it pretty much does the job required for my workflow.

Full file can be found in a gist @ workflow

This is just my first take on this idea. I am planning to reiterate on the preprocessing of the reports, to make it more polished. Currently, this workflow can be directly used by any Django project maintainers. Special thanks to file.io for free text uploading service and Github actions. please refer to the open-coverage-action repository for further reference.
Please reach out for suggestions and feedbacks. Thank You.

Links to the services used:

Anuj Kapoor
Greetings, Hi, Bearbobs greets you
Music Monday — What are you listening to? (Rock Edition 🤘)
#watercooler #music #discuss
5 GitHub Repositories every Developer should know
#javascript #webdev #beginners #productivity
15,000 GH stars in a year: how we did it 🤩
#opensource #career #devjournal #programming

Once suspended, bearbobs will not be able to comment or publish posts until their suspension is removed.

Once unsuspended, bearbobs will be able to comment and publish posts again.

Once unpublished, all posts by bearbobs will become hidden and only accessible to themselves.

If bearbobs is not suspended, they can still re-publish their posts from their dashboard.

Once unpublished, this post will become invisible to the public and only accessible to Anuj Kapoor.

Thanks for keeping DEV Community 👩‍💻👨‍💻 safe. Here is what you can do to flag bearbobs:

Unflagging bearbobs will restore default visibility to their posts.