A hexagonal architecture simplifies deferring or changing technology decisions. You want to change to a different framework? Write a new adapter. You want to use a database, instead of storing data in files? Again, write an adapter for it.

Draw a boundary around the business logic. The hexagon. Anything inside the hexagon must be free from technology concerns.
The outside of the hexagon talks with the inside only by using interfaces, called ports. Same the other way around. By changing the implementation of a port, you change the technology.

Isolating business logic inside the hexagon has another benefit. It enables writing fast, stable tests for the business logic. They do not depend on web technology to drive them, for example.

Here's an example diagram. It shows Spring MVC technology as boxes with dotted lines, ports and adapters as solid boxes, and the hexagon without its internals:

IReactToCommands is called a driver port. Its implementation is inside the hexagon. It's not shown on the diagram.

I show you how to implement that application. We go all the way from a user story to a domain model inside the hexagon. We start with a simple version of the application that prints to the console. Then we switch to Spring Boot and Spring MVC.

From a user story to ports & adapters

The company FooBars.io decides to build a Poetry App. The product owner and the developers agree on the following user story:

As acceptance criteria, the team agrees on:

The developers meet and draw the following diagram:

So the SimulatedUser sends commands to the IReactToCommands port. It asks for poems in English and German. Here's the code, it's available on Github.

The IReactToCommands port has only one method to receive any kind of command.

AskForPoem is the command. Instances are simple, immutable POJOs. They carry the language of the requested poem.

And that's it for the left, driver side of the hexagon. On to the right, driven side.

When the SimulatedUser asks the IReactToCommands port for a poem, the hexagon:

You can't see Step 2 yet. It happens inside the hexagon, in the domain model. That's the business logic of the example. So we focus on Step 1 and Step 3 first.

In Step 1, the collection of poems is a language dependent, hard coded array. It's provided by the HardcodedPoemLibrary adapter that implements the IObtainPoems port.

In Step 3, the ConsoleWriter adapter writes the lines of the poems to the output device, i.e. the console.

We have created all the ports, and a simple implementation of all the adapters. So far, the inside of the hexagon remained a mystery. It's up next. 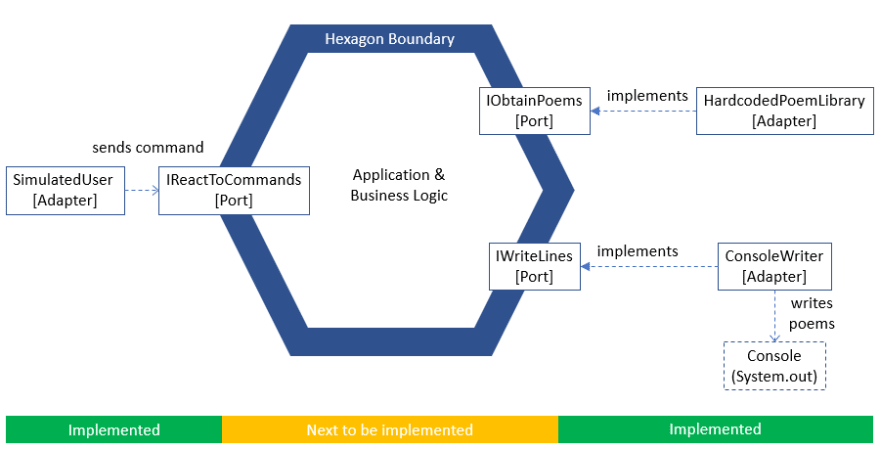 Command handlers (inside the hexagon)

When a user asks for a poem, the system displays a random poem.
Similar in the code: when the IReactToCommands port receives an AskForPoemcommand, the hexagon calls a DisplayRandomPoem command handler.

The DisplayRandomPoem command handler obtains a list of poems, picks a random one and writes it to the output device. This is exactly the list of steps we talked about in the last clause.

It's also the job of the command handler to translate between the domain model data and the data used in the port interfaces.

In my implementation of a hexagonal architecture, there is only a single driver port, IReactToCommands. It reacts to all types of commands.

The domain model of the example doesn’t have very interesting functionality. The RandomPoemPicker picks a random poem from a list.

A Poem has a constructor that takes a String containing line separators, and splits it into verses.

The really interesting bit about the example domain model: it doesn’t refer to a database or any other technology, not even by interface!

That means that you can test the domain model with plain unit tests. You don’t need to mock anything.

Such a pure domain model is not a necessary property of an application implementing a hexagonal architecture. But I like the decoupling and testability it provides.

Plug adapters into ports, and that's it

And that's it! The team shows the result to the product owner. And she's happy with the progress. Time for a little celebration.

The team decides to turn the poem app into a web application. And to store poems in a real database. They agree to use the Spring framework to implement it.
Before they start coding, the team meets and draws the following diagram: 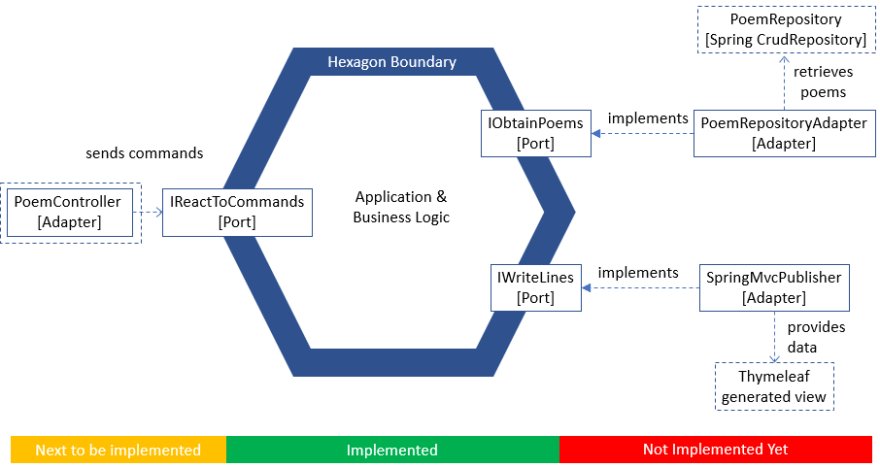 Instead of a SimulatedUser, there is a PoemController now, that sends commands to the hexagon.

When receiving a command, the PoemController calls springMvcBoundary.basedOn(webModel). This creates a new Boundary instance, based on the webModel of the request:

The call to reactTo() sends the command to the boundary, as before.
On the right side of the hexagon, the SpringMvcPublisher adds an attribute lines to the Spring MVC model. That's the value Thymeleaf uses to insert the lines into the web page.

The team also implements a PoemRepositoryAdapter to access the PoemRepository. The adapter gets the Poem objects from the database. It returns the texts of all poems as a String array.

Finally, the team implements the Application class that sets up an example repository and plugs the adapters into the ports.

And that's it. The switch to Spring is complete.

There are many ways to implement a hexagonal architecture. I showed you a straightforward approach that provides an easy to use, command driven API for the hexagon. It reduces the number of interfaces you need to implement. And it leads to a pure domain model.

If you want to get more information on the topic, read Alistair Cockburn’s original article on the subject.

The example in this article is inspired by a three part series of talks by Alistair Cockburn on the subject.

Last updated on 30 July 2021. Do you have a question? Chat with me on Gitter. If you want to keep up with what I’m doing or drop me a note, follow me on dev.to, LinkedIn or Twitter. Or visit my GitHub project.

Working with your Spring Boot application in IntelliJ