Hey there, In this article we are going to try the Git commands we had discussed in our earlier sessions and see how each works. If you didn't read the first article of this series I'd suggest going back and reading it here . If you are okay you can proceed with this one.

So I'm hoping you have your text-editors ready, I personally prefer vscode and that's the one I'll be using in this article so let's get started .

1. Writing Files in the Online Editor

In our last article we had left on a screen that displays how to add files into your repo. In the same screen, you will see a link written creating a new file, click on that and a text-editor will be opened for you. Let's create a simple readme file here.

.md extension stands for markdown. Markdown is a easy and cool way to format your texts.

After creating the file you can scroll down and commit the changes, note the the two text boxes at the bottom just before the "Commit New File", the first text box is used for your commit message where you say what you did. The second is for the message description where you can explain in details what you did in your commit.

You can leave it as default for now and Commit.

We want to use clone to download the repo we just created into our local machine.

In your current repo screen copy the url, it will be github.com/your_username/your_repo_name. We'll use this link somewhere.

Head over to your machine terminal, hoping you have git installed. If not just google on how to install git in you specific platform, I won't handle that because I want this article to be short as possible.

After completion you will see your GitHub repo and a readme.md file inside it just as it was in the online editor. And that's it for the clone command.

You can now edit the your files in your local machine and commit the changes. So let's get into that.

Edit your readme.md file and add something of your choice then we try the commit command but before we try that you can run

This checks for any modified files and changes you made. Then we add the changes by running

add . will add everything in the entire the directory and add Readme.md will inl add the changes in the Readme.md file 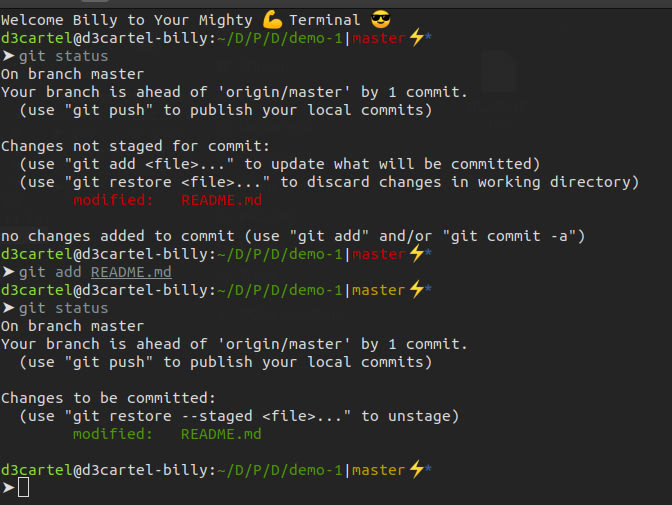 Now let's try to commit the changes we made into git. We do that by using the commit command.

-m stands for message and the the words in quotes is the message for our commit.

Now you have successfully committed your files to git, but the changes you made are not online yet, they are still within your local machine. To get them online to GitHub for example, we'll use another git command called push, so let's get into it.

Push is a command used to push your locally made changes to GitHub so that it can reflected in your online repo as well.

To push your changes lives you might need to set github SSH keys with your GitHub credentials so that when pushing GitHub will know you are the owner of the account.

I won't talk about setting SSH keys in this article but you can google it out and find solutions to that, instead we'll use vscode which has a GitHub integration thus we will only need to set it once and it will store and our GitHub credentials. I can't recall the exact way I did mine so I can't share on how I did it but I guess yours will pop up after writing the push commands and tell you want to do in order to set it up.

So let's try it out.

Now that we have our changes already committed, let's push those changes.

We do that by running

Origin stands for the location of our git repo and master stands to the branch we'll push into.

After that all our changes will now be live in GitHub, you can go back to GitHub and you'll see your changes live there.

This article is becoming long, so I'll stop it there so that I give you time to master three commands we just discussed.

In the next article I'll talk about the other two ways to add files into GitHub, the pull command and some other minor git commands.

See you then and don't forget to hit that 👍🏽 button if this helped.

Billy Okeyo
A tech enthusiast who is happily married to python programming though i do cheat at times with some of my side chicks 😀😀 PHP, Javascript.😇
What's New in Python 3.9
#python #tutorial #codenewbie
Hosting A Website on Infinity Free For Free
#webdev #productivity #tutorial
Why Should I Use Bootstrap
#css #tutorial #webdev

Once suspended, billy_de_cartel will not be able to comment or publish posts until their suspension is removed.

Once unsuspended, billy_de_cartel will be able to comment and publish posts again.

Once unpublished, all posts by billy_de_cartel will become hidden and only accessible to themselves.

If billy_de_cartel is not suspended, they can still re-publish their posts from their dashboard.

Once unpublished, this post will become invisible to the public and only accessible to Billy Okeyo.

Thanks for keeping DEV Community 👩‍💻👨‍💻 safe. Here is what you can do to flag billy_de_cartel:

Unflagging billy_de_cartel will restore default visibility to their posts.