To say we live in a wirelessly connected world feels like a bit of a cliche. Many of us start our days checking smartphones, accessorizing with wearables, and telling Alexa to "play top songs by Nickelback". Ok, maybe not so much that last one.

The tin cans and wire of days gone by have been replaced by communication protocols like Wi-Fi, Bluetooth, and cellular to provide us seamless connectivity from home to work to...anywhere! 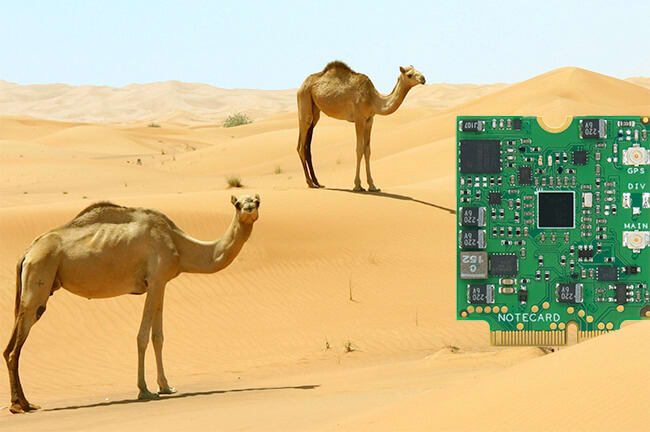 The cellular-enabled Notecard from Blues Wireless. Not to scale. 😊

IoT developers today have myriad choices when deciding which network connectivity option is best for them. When you add up all the pros and cons, many are surprised to find cellular as the logical path forward (if not for a primary connection, then as a fallback).

This mature and ubiquitous means of connecting IoT devices is prized for its reliability and reach, yet vilified for its traditionally obtuse pricing and relatively low data throughput.

In this blog series we are demystifying cellular and taking a critical look at four key topics related to wireless in the Internet of Things:

So What is Cellular IoT Anyway?

Cellular IoT technologies allow physical devices (e.g. sensors, actuators, and their host microcontrollers or single-board computers) to connect to a private network or the public Internet for the purpose of transmitting data.

By leveraging the same infrastructure as mobile phones, cellular IoT takes advantage of the broad availability of existing cellular networks, but without the power requirements of traditional cellular applications. With 5G just around the corner, cellular IoT is well-positioned to take advantage of higher bandwidth solutions that would normally be allocated to Wi-Fi or wired Ethernet. 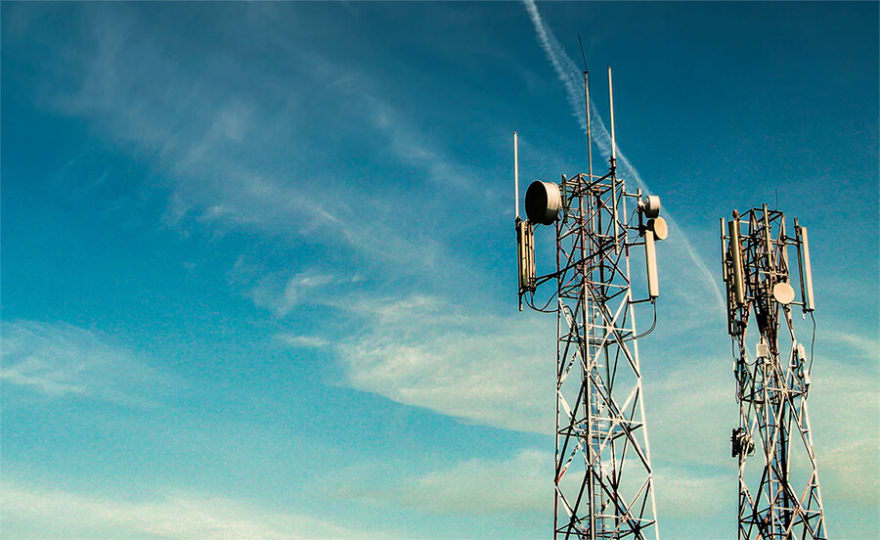 When we think about how cellular relates to the Internet of Things in particular, we stop thinking about just person-to-device cellular connections and instead open up to device-to-device connections (or device <--> person <--> device and every other iteration in between!).

The opportunities for the IoT then become limitless. Connected IoT solutions can be everything from streetlights that are controlled automatically, to remotely-monitored parking garages, to agricultural applications that optimize irrigation and fertilizer usage, or Machine Learning solutions that predict anomalies in remote settings.

The Critical Role of LTE-M and NB-IoT

While 2G/3G protocols are perfectly adequate for many IoT applications, modern IoT generally relies on LTE-M or NB-IoT. The rapid proliferation of these wireless standards is setting us up for a new dawn of IoT connectivity.

These standards were designed from the start around low power consumption, embedded security, and reliability. Combining these technical advantages with existing ubiquitous cellular networks has provided the world with an unparalleled choice for remote IoT connectivity.

You can probably hazard a guess that LTE-M is closely related to the popular LTE (Long-Term Evolution) wireless standard. The countries that support LTE encompass a vast list primarily comprised of the Americas and parts of Europe.

LTE-M effectively stands for "Long-Term Evolution for Machines" and allows for IoT devices to piggyback on existing LTE networks. It was designed in a power-conscious manner for applications that require low-to-medium data throughput. With a bandwidth of 1.4 MHz (compared to 20 MHz for LTE), LTE-M provides great range but less throughput than LTE (approximately 375KB down and 300KB up). LTE-M also offers cell tower handoff features, making it a great mobility solution (even across multiple regions).

Asset tracking, wearables, home security, and home/business monitoring are all great examples of use cases for LTE-M in the IoT.

Considering the Internet of Things is literally part of the name, NB-IoT was designed for the IoT. NB-IoT stands for "Narrowband-IoT" and is great for areas without robust LTE coverage or when bandwidth requirements are relatively minimal. Again, per its name, NB-IoT uses just a narrow band of the full bandwidth available.

Available globally where GSM is the flag-bearer (such as much of Europe, Africa, and Asia), NB-IoT devices consume very little power and provide less data throughout than LTE-M (approximately 60KB down and 30KB up). Compared to LTE-M's bandwidth of 1.4 MHz, NB-IoT operates on 200 KHz, providing longer range and better indoor penetration.

Where Does 5G Fit?

We've all been subject to the hype around 5G. Some of it is warranted, but frankly the rest is a lot of marketing to get us to buy new phones.

Like the other "xG" standards we've gotten used to (2G/3G/4G), 5G is another ladder rung towards faster and stronger network connections. As IoT deployments accelerate in scope and magnitude, one can imagine industrial applications comprised of thousands of devices that are pushing gigabytes of data every day. 5G will likely be our destination come that time.

What about today? Are you likely to be live streaming 4K video with a Raspberry Pi Zero? Probably not, but the opportunity of 5G is intriguing as we look towards the greenfield future of IoT.

LTE-M and NB-IoT on the Notecard

The Notecard from Blues Wireless provides cellular IoT connectivity in a low-power fashion using LTE-M, NB-IoT, and Cat-1 technologies. In global regions without these capabilities, coverage is supported by UMTS/HSPA+ and GSM/GPRS/EDGE wireless standards. 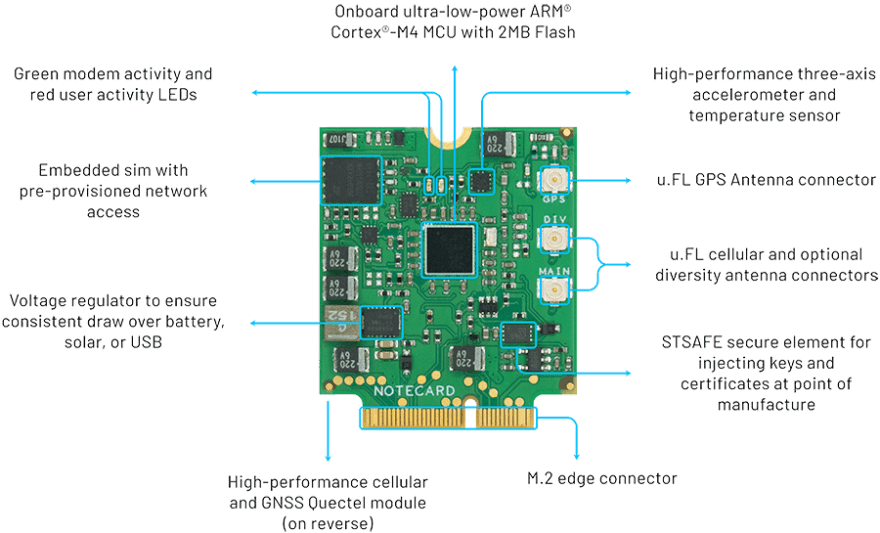 The Notecard is a secure device-to-cloud data-pump that comes with 500 MB of data and 10 years of cellular service. It's a tiny 30mm x 34mm SoM and ships ready to embed in a project via its M.2 edge connector. To make prototyping IoT projects easier, Blues Wireless provides a series of expansion boards to host the Notecard called Notecarriers.

Businesses love the Notecard for its straightforward pricing: $49 for 10 years of service and 500MB of data.

Developers love the Notecard for its microcontroller- and single-board computer-agnostic approach (bring your own MCU or SBC!), its open source libraries for Python, C/C++, and Arduino, and its friendly JSON-in and JSON-out request/response interface.

An example of adding a "note", or an event, with the Notecard API:

Cellular IoT technologies like LTE-M and NB-IoT introduce significant advantages for remote IoT deployments. Growing to become an ideal option for a wide range of applications, especially those in mobile or otherwise unpredictable locations, cellular is a mature, reliable, and logical choice.

Learn more about how Blues Wireless is making cellular IoT adoption easier for businesses AND developers with the Notecard and Notecarrier (and read the next post in this series on The Advantages of Cellular IoT).

Run a Power Automate flow with an HTTP request

Forget Heroku (use THIS instead)

Once suspended, blues will not be able to comment or publish posts until their suspension is removed.

Once unsuspended, blues will be able to comment and publish posts again.

Once unpublished, all posts by blues will become hidden and only accessible to themselves.

If blues is not suspended, they can still re-publish their posts from their dashboard.

Thanks for keeping DEV Community 👩‍💻👨‍💻 safe. Here is what you can do to flag blues:

Unflagging blues will restore default visibility to their posts.