The command line is scary. It's scary because it's unknown. When I first started using the command line, I automatically associated it with Linux and ended up actually INSTALLING LINUX so that I could properly learn the command line. You don't need to do that. You can do it on MacOS and Windows too.

You may have heard a few other words like Terminal, Shell, Command Line Interface, or CLI. These all mean the same thing. Sometimes, in Linux communities, these words have very slightly different meanings, but most of the time when people say any of these words they are talking about the same thing.

Go into Finder (Mac) or File Explorer (Windows) and open some folders on your computer. Go backwards and forwards and view all your files. Create a new folder, delete it, open a document. What you're doing right now is exactly what you'll be doing in the command line too, except it's text-based instead of GUI-based. And folders are actually called 'directories' for no reason. That's literally it. It's just another way of navigating through your files.

So why do I need the command line?

Honestly, you could potentially go your entire dev career without ever using it. But it would cost you hours, and it would be WAY more difficult than it needs to be. Developers use the command line to install things (like languages, libraries, and frameworks) and to run code. If you go onto GitHub and view almost anything, you'll see that it gives you directions on how to install by giving you commands to run. You run those commands in the command line and voila! You've installed a new library.

To run commands into the command line, type in the command and press Enter. Sometimes, the command might need some extra details. I'll explain a little more about this later.

It's time. Open your command line. On Mac, there is a built-in app called Terminal that you can use, and on Windows it's called cmd.exe, or Command Prompt.

As soon as you open it, you'll probably see something like this: 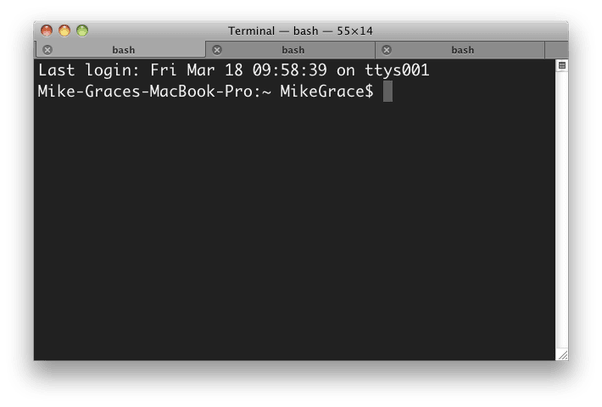 You may be asking yourself 'What is this? Where am I?' To find out the current directory (folder) that you're in, it depends on your operating system.

Pwd stands for present working directory and it will tell you exactly where you are. You can run this command as you're navigating through files if you're ever lost (which is very likely to happen) and it will return the file path of the directory you are in.

On Windows, echo %20% gives the same response. echo pretty much translates to print, and you're giving it a cd variable, which tells it to print the current directory path.

Command #2: View everything in your current directory

When you run this, the command line will tell you everything that inside your present working directly. You'll see a list of all the directors and documents inside your current directory. This command is operating system specific too.

ls stands for list, because you're listing all items in the directory, and dir stands for, well, directory.

Command #3: go into another directory

This command allows you to 'move' into another directory, making it your present working directory. It is probably the command you'll use the most in the command line!

It is cd and it stands for change directory. It's the same on MacOS, Linux, and Windows.

This is one of the commands that needs more information. If you just typed cd, the command line would be like "yo, where you wanna go?" So after cd , you'll type the name of the directory you want to go into. Like cd NewDirectory. It is based on your current position. What this means is that you need to include the path for the command line to follow to find that directory.

You can also use .. to return to the previous directory. So if I want to change directory out of TwitterBot and back into Projects, I can run cd ...

Here are a few tricks to make your command line experience awesome:

And there you have it - your first introduction to the command line. It wasn't that scary, was it? For more information and help for those visual learners, check out the YouTube video!

Cat McGee
I like Javascript and Python and make tutorials so you can like them too.
Want to be a full-stack developer without a degree? This is what you need
#career #beginners #codenewbie #productivity
From never writing code to becoming a Python dev in 19 steps
#python #career #beginners
Get your first dev job by building these projects! #3: Instagram Feed with a Flashlight Effect
#career #webdev #beginners #css

Once suspended, catmcgeecode will not be able to comment or publish posts until their suspension is removed.

Once unsuspended, catmcgeecode will be able to comment and publish posts again.

Once unpublished, all posts by catmcgeecode will become hidden and only accessible to themselves.

If catmcgeecode is not suspended, they can still re-publish their posts from their dashboard.

Once unpublished, this post will become invisible to the public and only accessible to Cat McGee.