Web applications and API endpoints are known to perform backend calls. Often that is all application does: fetches data from a couple of backends, combines it, and produces response.

Monitoring how much time fetching data took is essential. There are plenty production-ready buy-and-snap-on solutions that provide such monitoring, but they might be not good fit for some cases. And I think it's fun to dig deeper into things to get more understanding of how it all works.

Let's look at code examples that use popular Python networking libraries and are instrumented to report HTTP request execution time.

I'm going to compare how request timings look for fetching HTML pages using requests library and for asyncronously fetching same HTML pages using aiohttp library. I aim to visualize the difference in timings, and to introduce tools that can be used for such monitoring.

To be fair, requests library has plugins that enable asyncronous IO and there are so many other ways to achieve this in Python... I picked aiohttp as it provides neat request timing tracing opportunities, and I use this library a lot in the wild.

To monitor request timings we will use Telegraf, InfluxDB and Grafana stack. These tools are very easy to setup locally, open source, free for personal usage, and could be used in production environment.

All code from this writing is available in repo.

Let's dive into first Python code example. Here's what it does:

Full code of Example 0 can be found in example-0-requests-send-stats.py.

High-level execution flow can be followed from main part of the program:

Inside call_python_and_mozilla_using_requests two simple HTTP requests are performed one by one, and their response text used to compose result:

get_response_text function executes HTTP request for a given URL with primitive exception handling, and hooks to report request execution time:

This code uses requests library (docs). Basic usage to get text content from URL is as follows:

requests.get accepts optional hooks argument, where function to be called after request is completed is specified - request_complete_callback.

This callback function may look funny if you're not familiar with functional programming. partial(profile_request, time.perf_counter()) is itself a function. It's same function as profile_request but the first argument is already filled in - time.perf_counter() was passed as start_time argument. This trick is used to supply correct start_time for each request, as request_complete_callback function is constructed anew for each request, while code for sending request execution time is isolated in another function profile_request. We can rewrite that as follows:

And it's going to work alright. Now there's a function defined inside a function, and get_response_text is bloated with profiling stuff, which is not something I like.

You can read more about partial functions and Python functools.

I have another post that describes ways to send stats from Python program to Telegraf.

In short, send_stats accepts metric name, metric value and tags dictionary. Those are converted to one string and sent to the socket on which Telegraf listens for measurement data. Telegraf sends received metrics to a database (InfluxDB). Grafana dashboard queries the database to put a dot on graph for each metric value reported.

A piece of code which is a decorator suitable for any function (async, sync, method of class or pure function) is adapted here to measure execution time of function that is decorated.
profile decorator is used to profile total execition time of functions call_python_and_mozilla_using_requests and call_python_and_mozilla_using_aiohttp (see the following examples).
Don't confuse with another useful tool - line_profiler - that also provides profile decorator.

Let's run this example and set up all the monitoring tools. See Running code examples on how to run example code and set up monitoring infrastructure.

We can configure a panel that shows request execution time: 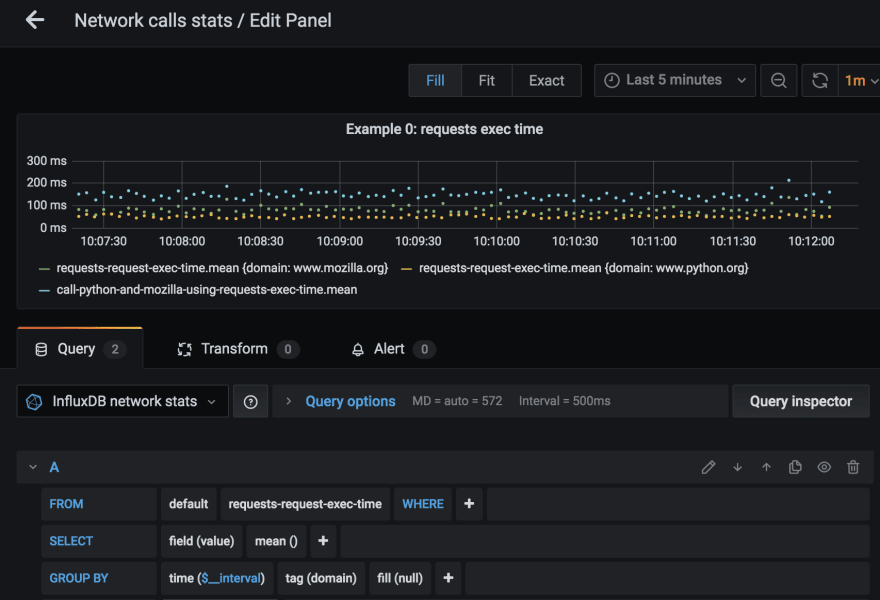 Blue dots of total execution time roughly correspond to the sum of time request to python.org and request to mozilla.org took (green and yellow dots). They measure at approximately 150 msec on average.

If we change 'www.python.org' to 'www.python1.org' in function call_python_and_mozilla_using_requests, exceptions appear in terminal output, and exception metrics are sent to Telegraf:

Configure a separate Grafana panel to see exceptions on the dashboard: 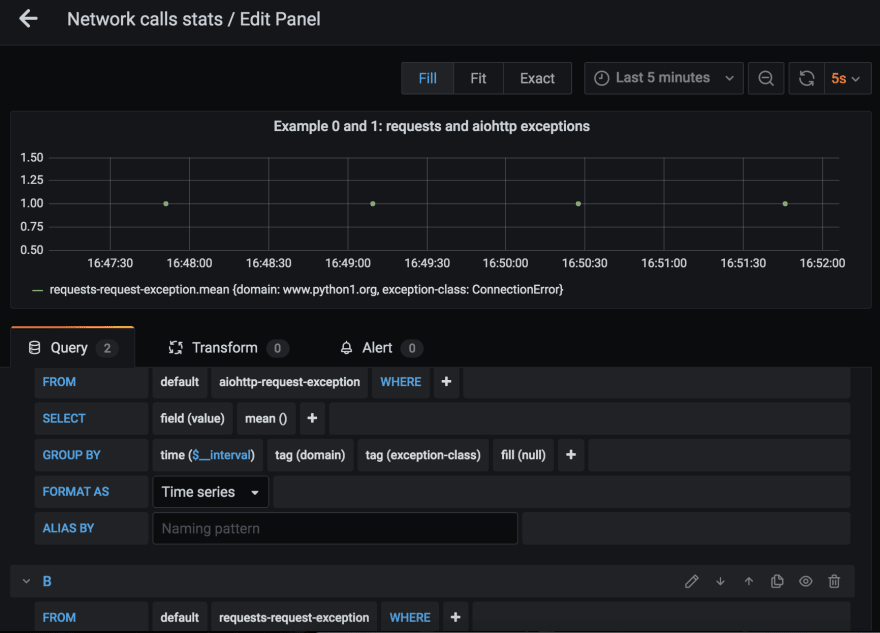 Exception class is sent as tag along with metric value. This gives us the ability to plot different lines for exceptions of different classes. To achieve this, pick 'group by - tag(exception_class)' when editing request exceptions panel.

Code of example 0 can be improved to reuse the same connection for all calls performed in that forever running while loop - here's an improved version.

The only significant code change is this:

Connection creation is moved out of the while loop. Now, the connection is established once and for all.

Let's compare how much time request execution takes when a connection is reused:

The dots on the left are measurements for for original version of Example 0, and ones on the right came from the improved version. We can definitely notice how total execution time get lower, below 100 msec on average.

Let's dive into the next code example. Here's what it does:

Full code of Example 1 can be found in example-1-aiohttp-send-stats-basic.py.

High-level execution flow is similar to the Example 0, the way content is fetched from URLs differs.

The tale of two HTTP requests

Here, aiohttp library's ClientSession is used to execute the request (docs). Basic usage to get text content from URL is as follows: 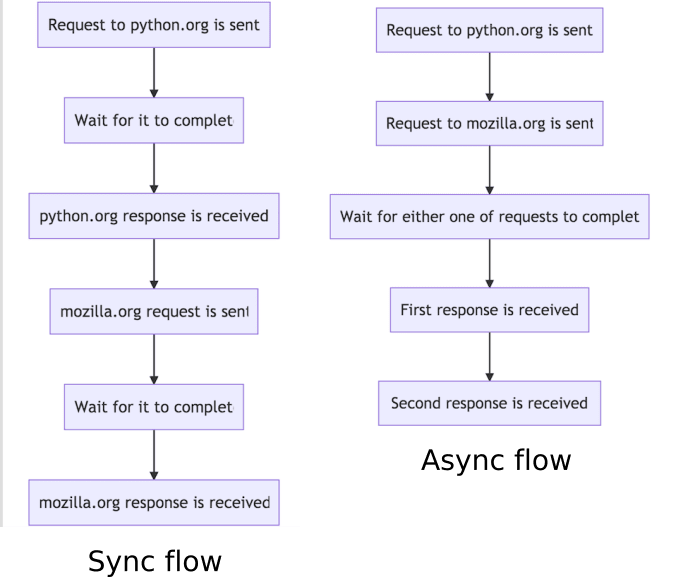 await asyncio.gather returns the result after both of these requests are complete. Total execution time is approximately the time of the longest request out of these two. You're probably aware that this is called non-blocking IO. Instead of blocking, this kind of IO operation frees execution thread until it needs it again.

Synchronous, blocking IO, like in Example 0, has different following execution order (see chart above, on the left). Total execution time is approximately the sum of both requests execution time. For positive integers, it's always true that A + B > MAX(A, B). Hence, asynchronous execution takes less time than synchronous one, provided unlimited CPU was available in both cases.

The total execution time for both requests is 75-100 msec.

Next, we're going to look at how execution time of each aiohttp request is reported.

aiohttp provides a way to execute a custom function when HTTP request execution progresses through lifecycle stages: before request is sent, when connection is established, after response chunk is received, etc. For that, object-tracer is passed to aiohttp.ClientSession - trace_configs:

Notice how the timestamp is computed:

It is recommended to use event loop’s internal monotonic clock to compute time delta in asyncronous code.

Function-hooks have arguments session, trace_config_ctx, params. Let's look at what they are.

session is an instance of aiohttp.ClientSession.

trace_config_ctx is context that is passed through callbacks. Custom values call be added to it when request is made:

This way function-hook can be programmed to behave differently for different request calls or to report additional data.

params argument in on_request_end is aiohttp.TraceRequestEndParams and as such has url property. url property is of yarl.URL type. params.url.raw_host returns the domain of the URL that was requested. Domain is sent as a tag for metric, and this makes it possible to plot separate lines for different URLs.

To call async function in sync execution context, special tooling is used, which is adapted from another publication. I'm not going to dive into Python's asyncronous ways in this post. Read more about Python's asyncio, it's pretty cool.

Compare results for Example 0 and 1

Connection is not reused for both cases here. Execution time for async version is lower, as expected.

It's possible to report stats for:

Impressive, isn't it? Documentation on tracing in aiohttp is here.

I won't bore you with code for each function like on_dns_resolvehost_end, it's quite similar to on_request_end. Full code of Example 2 is here.

Reported stats on dashboard for example 2:

We can definitely improve on that - in Example 3.

Let's modify Example 2 code so that ClientSession is created once, outside while loop:

And check out how stats look now:

There's only one dot for connection establishing, and one per DNS resoltion per domain. There's plenty of dots for connection reuse event.
Total execution time is below 50 msec. Cool.

Compare sync and async URL fetch, with and without reusing connection

We're open-source! The data-centric sibling of VS Code

Once suspended, cheviana will not be able to comment or publish posts until their suspension is removed.

Once unsuspended, cheviana will be able to comment and publish posts again.

Once unpublished, all posts by cheviana will become hidden and only accessible to themselves.

If cheviana is not suspended, they can still re-publish their posts from their dashboard.

Once unpublished, this post will become invisible to the public and only accessible to Jane Radetska.

Thanks for keeping DEV Community safe. Here is what you can do to flag cheviana:

Unflagging cheviana will restore default visibility to their posts.