I believe in functional programming, and I want to contribute.

While there are many content out there talking about what functional programming exactly is, I still see that many early adopters design a program using a thought process that fits for an imperative or object-oriented program.

So in this article series, I will talk about thought process behind writing a program in functional paradigm. Where do you start? What are the main strategy? What is problem solving pattern?

While I think this image from NDC conference is true, I think it is not helpful. 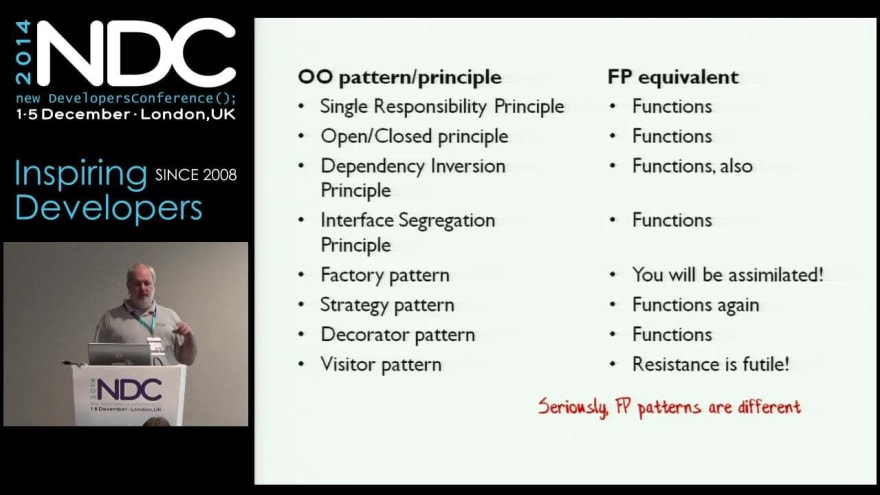 So let's break it down.

The core idea of functional thinking is declarative code.

What is declarative code? Good question.

This is a mathematic definition of function

In mathematics, a function[note 1] is a binary relation between two sets that associates every element of the first set to exactly one element of the second set. Typical examples are functions from integers to integers, or from the real numbers to real numbers.

Basically, a function is a static map between the input to output. The function does not care how do you get a result. You might have a million if-else for every possible case. That is still a function.

So in functional programming, we want to have ability to say

In this article, we will use a bowling kata as an example.

So what we want to say is to have a function:

That's it. That is a functional programming in nutshell.

We have a design, let's implement this function.

So do you mean to write every logic inside this single function? Will we end up with 1000 lines of code? Would that be really hard to read and reason?

Now we are getting into the beefy part. How to breakdown the system?

Break down the problem

In the imperative and object-oriented paradigm, we have many patterns, heuristic, and standard thought process to break down the problem.

For example, object-oriented programming's most basic fundamental is to define a subsystem or data as an object. Then we define the operation we can do with that object, and then, we piece it together.

There are many design patterns and strategies to achieve that. Still, the basic building block and thought process of object-oriented is defining some smaller objects and making them work together.

But then how would we breakdown the system in a functional programming paradigm?

Ok. How can we break it down?

Wait. that is not helping. What kind of functions? More functions is a solution to every problem?

Ok, I will clarify it further. Here is the deal.

And that is what it means to "write more functions".

The thought process seems simple, but hard to sink in.

In this series, I will explain how to design a program in functional paradigm, starting by solving some programming kata.

The purpose of bowling kata, in functional term, is to write a function

Just from the first glance, I know that this function will be pretty long and complicated.

I decided to break it down.

Use this question: What is a data A in such that?

Well, if I have a set of score of each bowling frame, then I can just sum it up and create a game score.

So I chose score of each game frame as an intermediate data.

I knew that sum is easy to implement, and I assumed that frameScores should be easier to implement.

What's left for me now is to implement frameScores.

But before we go, to be on a same page, I will clarify data structure of game.

This is the shape of the data. A game is a tuple consist of 9 NormalFrame and 1 LastFrame.

So I decided to break it down more.

How can I do it? What are rules and logic here?

In each frame, the bowler gets up to two tries to knock down all the pins. There are basically four ways to calculate frame score:

That is the rules. I want to break down frameScore. What can I do?

Repeat the same question: What is a data A in such that?

So I thought, what is dataset A?

I found that A will be a dataset consist of

If I have all these data, I can easily implement frameScore like this

Now I think it is simpler enough to implement, so I ended my breakdown here.

Done deal!! I have a program design.

As I tried implement all of these, I found that each of them is simple enough to write and reason about.

As I wrote thought process of functional programming design in pure function domain can simply be stated as:

That's it. That is a very simple and yet very powerful way of thinking about a problem.

I show the example of what results from repeatedly asking myself the question and what kind of program I ended up.

It is very interesting to see what kind of program design can come from repeatedly asking that question. It is a simple and powerful question. I will show you more in the next article.

And I hope you understand now why a functional programming design can be as simple as "Write more functions!!" 😄

You might wondering about how this is different from imperative programming?

Thinking imperatively will lead you to a little but fundamentally different line of thought.

Most likely, you will get into this:

But where is that little bit more come from? It comes from another frame in the game, so it is natural to think that the individual frame score must have access to the whole game, which is not true.

Most of the implementation I saw just embedded the whole game context in a single object. And both gameScore and frameScore methods consume that full game context, only to access that "a little bit more" data.

In functional line of thought, you will think of a function frameScore and it inputs, which lead to limited access.

And it is possible to use this approach to write an Object-oriented code. I did it in the Typescript implementation repository. You can check it out.

Functional thinking patterns can be helpful, even if you don't use a functional programming language.

How to make sure that your code match the design?

Chakrit Likitkhajorn
I am a product builder, specialize in programming. I have a keen interest in how people write software.
Design a program in Functional #2 Poker Kata
#functional #scala #architecture
Showerthought: On FP and OOP
#functional #oop
Model เวลาในแบบ Functional programming
#functional #typescript