Why Solving This Problem Matters

If you’re in an agile dev team, particularly at a startup where shipping code matters most, it’s easy to think of privacy as a tax that slows down building things in order for legal teams to evaluate risks.

That doesn’t necessarily mean you don’t care about privacy. It means you have no efficient way to make it a part of your agile process. I believe it’s impossible to solve the world’s privacy problems without first making it easier for product-builders to do the right, respectful thing regarding user data. That’s why building devtools for privacy matters so much.

We can all see this around us already. Governments, driven by user fears of Big Tech, are increasingly regulating software development companies. Tech is the new oil, automotive, and financial services industries combined — all of which are highly regulated. In our regulated future, software and the engineers that build it will be required to ensure their systems comply with a myriad of complex regulations. These regulations often differ by geography, so if you’re building internet-scale tech that crosses continents, simply building a compliant product becomes a considerable challenge.

If you want to understand the consequence of this concretely, read the FTC’s 2019 Consent Decree against Facebook. The events that brought about the decree are multifaceted, but here is a brief synopsis: In contradiction of Facebook’s commitment to protecting users’ privacy, third-party developers were able to collect users’ personal information, even of users who had configured their settings to limit sharing to their Facebook friends. In the eyes of the FTC, Facebook failed to adequately assess and address third-party risk (recall that this transpired in the wake of the Cambridge Analytica scandal). Facebook had also asked users for phone numbers, with the stated purpose of security measures, to authenticate users who needed to reset their account passwords. Beyond the stated purpose, though, Facebook used phone numbers to deliver advertisements.

Aside from fining Facebook $5B — the largest fine ever imposed for a privacy violation, and some members of the FTC thought the penalties should have gone further — the decree laid out for Facebook a set of changes it must adopt to avoid further penalty.

The FTC outlined for Facebook the following, which trickles down to the entire dev community: If you write code that results in software that might collect, process or in some way munge users’ personal data, you must be able to describe what types of data you’re using, what you’re using them for and evidence of the risk mitigation strategies that were considered in doing so. This has to happen before you deploy!

A passage below from Section VII. E. 2(b), page 10 of the FTC Modifying Order Consent Decree:

The implications of this directive are striking to consider. The FTC has directed the tech community to ensure that when code is written, we know what data it’s using, for what purpose, and how we’re going to limit those risks.

As I’ve written before, it’s analogous to the shift of security over the last ten years from being a post-deployment testing problem to being part of healthy development practises. Now, security is a normal and healthy part of any good dev’s attitude to coding.

What the FTC and regulators around the world are asking the people who write software to do is this: be accountable and thoughtful about the decisions you make in the code you write. Declare what data you’re using and why, and ensure that it’s not used for the wrong reasons at any time in the future.

That seemingly simple business requirement demands an entire set of tools that are missing in the average agile development process. In order to ensure your team can continue shipping as quickly — and thoughtfully — as possible, you’re going to need a process and tools to describe privacy and data processing characteristics of your systems according to agreed-upon definitions. With these tools, you can then review your systems, mitigate risks, and report on them if necessary.

So what would those tools look like? A good starting point here is to consider what your tech stack looks like today, and how it might look in the future. As with any good software architect, plan for scale. Don’t just imagine what it will look like in your first deployment. Rather, ask yourself what will your tech stack look like when your company is successful and has a lot of users.

A good reference point for this is this article by A16Z’s Martin Casado, Matt Bornstein and Jennifer Li on Emerging Architectures for Modern Data Infrastructure.

The diagram below shows what data infrastructure at scale ends up looking like — we’ve added what traditional privacy management looks like here, driven by the GRC (Governance, Risk, Compliance or Legal) teams. 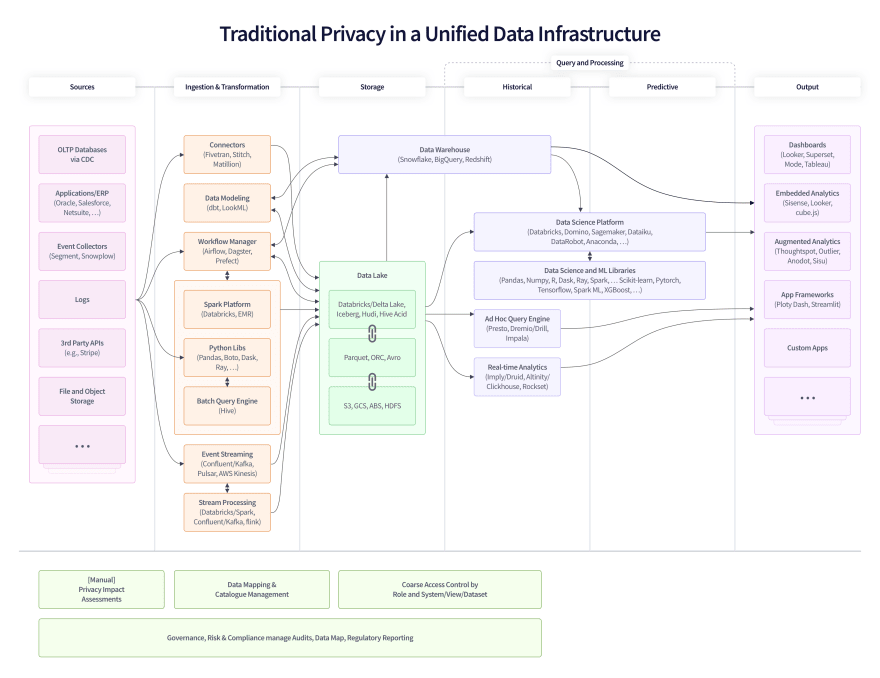 As you can see, your venerable application has become a behemoth of data sources, ETL, storage and various layers of historical and predictive analytics.

In this, you’ll see that privacy and governance become roles shared by legal/governance and security but sit outside the architecture of the system with many tasks being managed manually — it is essentially a complex reporting structure rather than an active layer of the system.

There’s a simplified view of this that helps to parse each tranche of the data infrastructure which includes where privacy operations typically sit in the data lifecycle. You can see in the diagram below these happen after deployment, so code is already in production and much of the work revolves around post hoc data identification and risk mitigation. 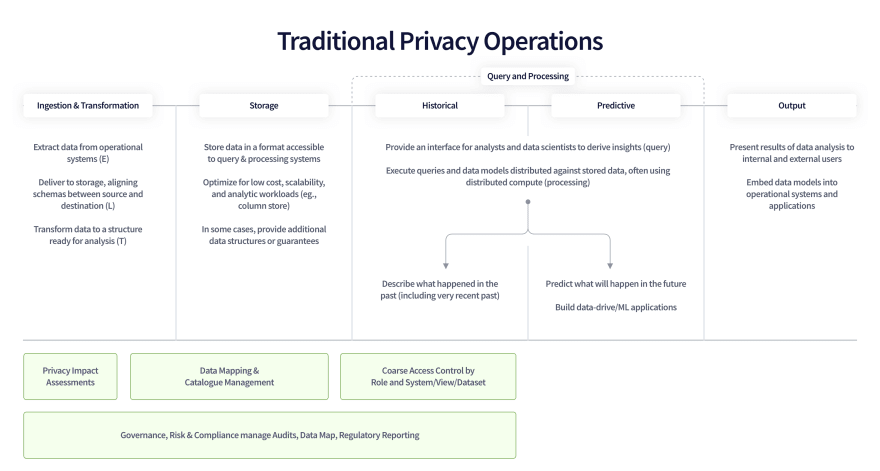 While the largest companies with endless engineering resources are able to conduct manual privacy reviews during the building of each layer, the reality is much different in most cases. In a typical case, privacy happens after you’re deployed to production, after data collection has started and once there’s a realization of a potential risk.

And resolving it at this point becomes nearly impossible — data has been collected, its source or use is often unclear, and you’re already badly exposed to accidentally using it in a way that might break the law (Facebook’s painful example above).

The result is bolt-on tools that sit external to your core architecture. It’s quite literally slapping a bandaid over a deep structural issue in a complex system. That bandaid allows you to check a box, but your systems are still opaque. You still don’t understand where data is, so you have to do the work manually. Governance, compliance and metadata management become a manual burden for both legal and data engineering teams. For most developers, that burden shows up every so often as an unwanted, painful ticket that slows them down from the work they love most. The industry’s current approach to privacy is not only inefficient. It’s also detrimental to building a culture of privacy, pitting privacy against innovation. We can and must rework our collective approach to privacy, and that calls for new tools.

Imagine an alternative to this painful remediative and refactoring work to mitigate risks after you’ve already deployed. Instead, you could add tools to your CI pipeline that would help to describe the data processing characteristics of your project and warn you if there are any risks as part of each commit or PR.

The result would be two powerful concepts:

Since founding Ethyca three years ago, our incredible team of product, engineering and privacy specialists have been working to understand what this could look like.

The solution to this is developer tools built to integrate with existing developer workflows. We believe that the solution comprises the following set of tools, overlaid on the data infrastructure diagram below: 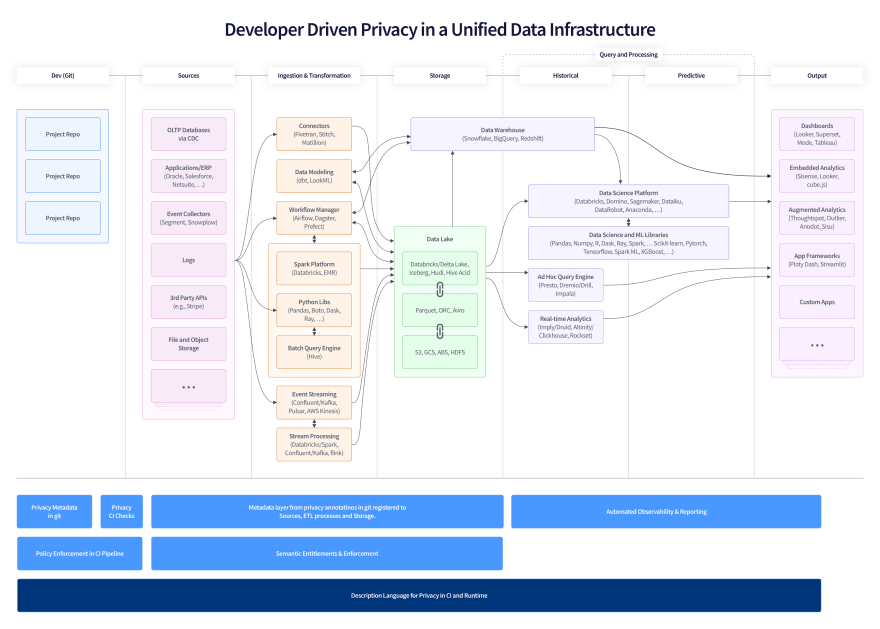 An ontology and open standard for how to describe privacy characteristics of your code and databases. Rather like Infrastructure as Code tools for DevOps, such as Terraform or Ansible, a Privacy as Code solution would allow any developer to easily describe and version privacy metadata directly in git, ensuring that your project declares the type of data it uses and the purposes for which it uses them.

If this is driven by an open, easily understood standard ontology and taxonomy, integrating systems and evaluating risk will become API driven and assured.

Once you have the ability to declare privacy characteristics, it should be possible to describe policies that can be enforced directly on projects in CI, on commit or for each PR. This would mean that instead of complex human-in-the-loop privacy reviews with legal teams, your pipeline can check your projects against agreed company policies and nudge you if something doesn’t look right before you deploy. Like security tools, but to help quickly ensure your work meets the company requirements. This effort usually focuses on dataset metadata — so tagging data at rest. If the code you deploy already describes its context and types of data, this can now sidecar your runtime environment transactions, meaning you can see what data types flow where and for what purpose. Metadata becomes a living component of your software development process and updates synchronously with each change.

Because you have a consistent definition language for describing data behavior in your application; you can now use this same standard to enforce access or comply with regulations, be they today’s regulations or regulations a decade from now. The integrated nature of the tools and the standard definitions of data use in the language ensure that you have a foundation on which you can enforce new policies in future without having to refactor your complex production infrastructure.

This brings us full-circle to developer tools for privacy. We need to build tools that work in existing pipelines and allow us to quickly describe the behavior of our code and the data in our systems. From there, we can evaluate risks, report on them and make changes.

Achieving this requires an open standard for privacy behaviors and characteristics as well as risk evaluation tools that are wired directly into git and other CI tools to make privacy a streamlined, low-friction part of your dev process.

I’m confident and optimistic that this is possible. It’s what we’ve been working on for some time at Ethyca, and we’re excited to share results of that work with the dev community in the coming months. In the next year, you’ll see Ethyca publicly step forward to offer solutions and ideas that we’d like to share with the entire engineering community. Our aim is to make privacy a simple, natural and easily enforceable part of your development process. I can’t wait to share this with you. This problem matters for the sake of our industry and the health of privacy and data ethics everywhere.

The Power of Greedy Algorithms: A Simple but Effective Approach to Problem-Solving

Once suspended, cillian will not be able to comment or publish posts until their suspension is removed.

Once unsuspended, cillian will be able to comment and publish posts again.

Once unpublished, all posts by cillian will become hidden and only accessible to themselves.

If cillian is not suspended, they can still re-publish their posts from their dashboard.

Once unpublished, this post will become invisible to the public and only accessible to Cillian.

Thanks for keeping DEV Community 👩‍💻👨‍💻 safe. Here is what you can do to flag cillian:

Unflagging cillian will restore default visibility to their posts.