You know that thing you want to build?

But there’s already a thing doing something like that? And someone is bound to get up in your face and tell you all about it?

If that sounds familiar then here’s two quick tweets and a hot take for you.

Recently Pieter Levels made something called Hoodmaps. You might have seen it on Product Hunt. It’s a fun project that lets people overlay Google Maps with other information. In this case, funny references to the neighbourhood demographics of major cities.

Here’s the map for San Francisco. And yeah it’s pretty accurate. Although I don’t agree with the annotations for Mountain View, where I’m currently writing this, for obvious reasons 😂. 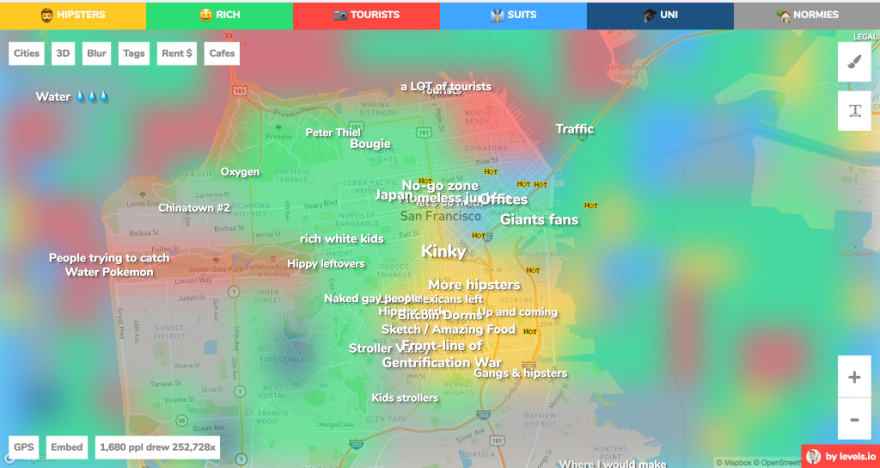 It’s pretty cool huh? Yeah I think so too. But because this is the internet let’s brace ourselves for the inevitable polar response in 3, 2, 1…

@martinechenique Hoodmaps is interesting and all, but @spatialAI has been doing a better version of this for almost 2 years...

I don’t want to unfairly ping Matthew here because it’s actually pretty cool that he cared to reach out and engage with Pieter on this.

Like any founder building any product at all I find myself on Pieter’s side of the conversation at least a few times a week. The minute you ship anything at all you’ve got no end of people telling you it already exists in the world. Regardless of your domain expertise or particular vision.

But like any member of the global startup ecosystem (which probably includes you if you’re reading this) I’ve also had to learn how to channel my pattern recognition for similar projects/products into questions that founders can answer. It’s human nature after all and really healthy to acknowledge that we all do this instinctively.

The awesome thing is that giving it five minutes and letting the founder explain their vision can often be enlightening — another reminder not to scream “Simpsons did it” every time something looks familiar.

The question is: do you want $2M in funding to build a stealth app that nobody will ever use, or actually ship an app that ppl can use today

Pieter doesn’t seemed bothered here and is having some fun in reply. Let’s remember that the internet can be a fun place if we don’t take things too personally (AKA put down your pitchfork for a minute 🔥🔫).

This simple exchange highlights a few points that I’d like to mark up in highlighter and draw a few circles around. In no particular order…

Build any damn passion project you want to

The world is an amazing place full of amazing people doing amazing things because they want to. Be one of those people (they tend to be successful).

When it comes to passion projects there’s really only one person that matters. And that’s you.

Pieter’s a bit of an outlier in the passion project category as he’s certainly been prolific over the last few years. Which is why it’s even more odd to call him out in particular on something both fun and personal. And as others point out, has already gained a certain amount of cultural traction.

Passion projects are immutably awesome. The more you do the more you learn. And the more you share the more the world levels up with you. Imagine if someone would have told Linus to not bother creating Linux as “just a hobby”? After all, Minix already existed, right?

Learn to ask for clarification like a real human

Pretty much everything invented has a bunch of other things just like it. Just like birds. Have you seen how many breeds of bird there are? Are there any ornithologists snarking “kookaburras are interesting and all, but eagles have been doing a better version of flight for almost two millennia”?

No. Because that would be rididculous.

My tip is that if you encounter a founder working on a project or product that seems similar to something else you’ve seen, you’ve got a chance to learn some nuance about that space. Try this…

“I’m not an expert in that field, but I’m familiar with [NAME_OF_THING]. What’s your take on this?”

As someone who cofounded a documentation tool for software teams I can certainly relate. I have to declare my obvious bias here.

And I can ensure you that it’s okay to ask these questions. If you’re interested I’ll tell you all about our unique focus at Corilla, the backstory of our experience as an internal startup at Red Hat and even how much I (genuinely) love the handful of similar companies exploring this space as well. That’s a blog post for another time.

Thanks for reading. This post originally appeared on Minimum Viable Paragraph.

All about Komodor :- A Kubernetes Troubleshooting Platform and more

How I Built My Tech Startup As a Solo Developer

How To See The Inverted Treasury Yield Curve With OpenBB Terminal

David Ryan
Creator of Corilla. All about PM and UX and happy writers. Formerly Red Hat and NUMA Paris startup accelerator.
The limits of the MVP (and the importance of kung-fu)
#minimalviableproduct #productmanagement #startup #productdesign

Once suspended, davedri will not be able to comment or publish posts until their suspension is removed.

Once unsuspended, davedri will be able to comment and publish posts again.

Once unpublished, all posts by davedri will become hidden and only accessible to themselves.

If davedri is not suspended, they can still re-publish their posts from their dashboard.

Once unpublished, this post will become invisible to the public and only accessible to David Ryan.

Thanks for keeping DEV Community safe. Here is what you can do to flag davedri:

Unflagging davedri will restore default visibility to their posts.