As you are well aware, I’ve been doing IoT for almost 20 years (yeah, not a typo!). And for the last 2.5 years, I’ve been applying that IoT knowledge to Time Series Databases. Also, as you are probably aware, I am no longer at InfluxData, where I’d been doing that. Long story, but I’m not really allowed to talk about it much. One thing I have discovered over the past 2 months, since leaving InfluxData, is that it appears as though I’m the only Developer Relations Professional who actually has expertise in IoT and Time Series Databases. Who knew.

It turns out that, while there are a number of Time Series Databases on the market, there aren’t actually that many good ones. You can go by the DBEngines rankings: 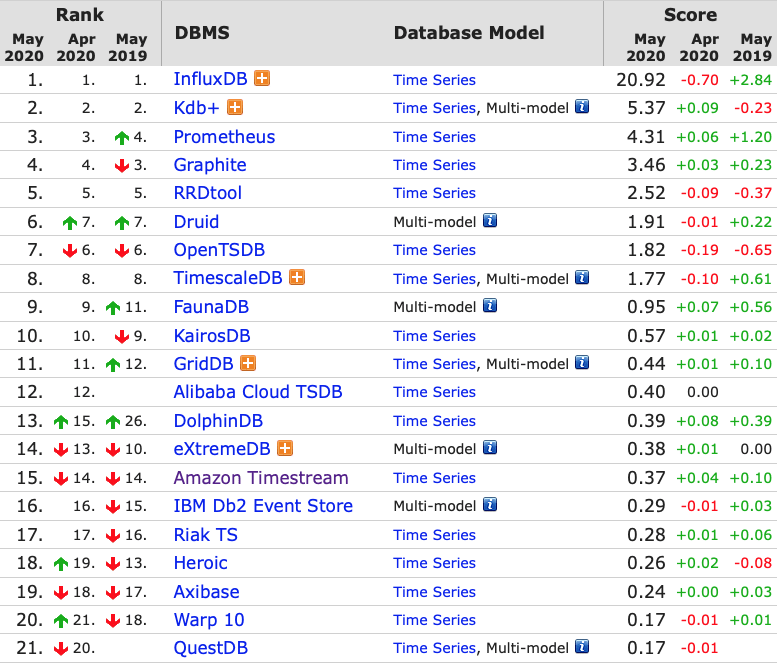 But it turns out that you can game those rankings pretty heavily if you make an effort at it. Clearly some are better at gaming that system than others — not that I’m naming names or anything. I wouldn’t base my decisions on what is a _ good _ Time Series Database (TSDB) on those ranking though. As always, the answer is “it depends.”

That being said, I figured I should announce that I have now joined a new TSDB Startup as their Head of Developer Relations. That company is QuestDB.io. and, as you may have gathered from this, I’m pretty enthusiastic about their database. Yes, it’s got some rough edges, but the performance is stellar, and the rough edges will smooth out nicely in short order. It’s a small company, but that just means that there is room to expand and grow!

I won’t be covering exclusively IoT-related topics for them though. They are well positioned for financial markets, DevOps, etc. as well so, since I’m Head of DevRel, I’ll be covering it all!

So, stay tuned and let’s see where this goes!

David G. Simmons
I've been doing IoT since before it was IoT and way before it was cool.
What in the job hopping hell?
#devrel #evangelism #jobs
A QuestDB Dashboard with Node-Red
#database #gadgetry #iot #dashboard
IoT on QuestDB
#databse #iot #arduino #database