C# and C++ are general-purpose programming languages used for application development across various platforms. C# and C++ have rich histories. They’re both popular choices for software development, web development, and game development. If you’re new to computer science, it may be difficult to choose which language to learn first.

In this article, we’ll discuss the difference between C# and C++, as well as their histories and applications.

When was C# created?

C# (pronounced “C Sharp”) was developed in 2000 by Microsoft’s Anders Hejlsberg. It was known as “Cool” or "C.O.O.L." in its early days, which stood for “C-Like Object Oriented Language.” C# was introduced as a generic object-oriented programming (OOP) language and a direct competitor to Java on the Windows platform. In 2005, C# version 2.0 was still in the process of catching up with Java by introducing generics and iterators. By 2007, C# was growing into a more distinct hybrid as both an object-oriented and functional language.

C# has gained many features over the years and become a multi-platform language. It was initially intended for development in the Microsoft ecosystem, but Microsoft has since released open-source tools that support C# development across various platforms: the Visual Studio Code code editor, the Roslyn compiler, and the unified .NET platform.

When was C++ created?

C++ was developed in 1979 by Bjarne Stroustrup, a Danish graduate student. Influenced by his PhD thesis, Stroustrup aimed to enhance C by incorporating features from Simula and other programming languages. C++ fulfilled the need for object-oriented programming within C. It was a general-purpose language that introduced objects and classes to C. As such, it was colloquially known as “C with Classes”. The “++” directly comes from C’s ‘++’ operator, which increments the value of a variable. C++ has since changed significantly and adopted object-oriented, generic, and functional features as well as facilities for low-level memory manipulation.

Overview and applications: C# vs C++

At first glance, C# and C++ might seem to have more similarities than differences. They’re both multi-paradigm languages that can support object-oriented, functional, and generic programming. They are general-purpose, and widely used for software development, web development, and game development across platforms. Let’s examine each language individually before we compare their differences.

C#, or C Sharp, is a high-level language that runs on the .NET Framework. It is a multi-paradigm language that includes support for structured, imperative, reflective, and concurrent programming paradigms. C# code is typically compiled using just-in-time (JIT) compilation in Common Language Runtime (CLR), the virtual machine component of the .NET Framework. The code is converted to machine instructions that are executable on the computer’s CPU.

C# was originally designed for the Microsoft platform. Today, it has a variety of development applications, including:

C++ is considered an intermediate language, meaning it combines features of high-level and low-level programming languages. It is a multi-paradigm language that includes support for procedural, object-oriented, imperative, and generic programming paradigms. As a low-level language, it gives you a lot of control over your code. C++ is often a go-to language for large and embedded systems, and is known for its speed and flexibility. C++ is most often implemented as a compiled language, meaning the source code compiles directly into machine code.

C++ is often used for system programming and building applications with resource constraints. It is also used to develop the following:

Major differences between C# and C++

Let's start with three major differences between C# and C++: 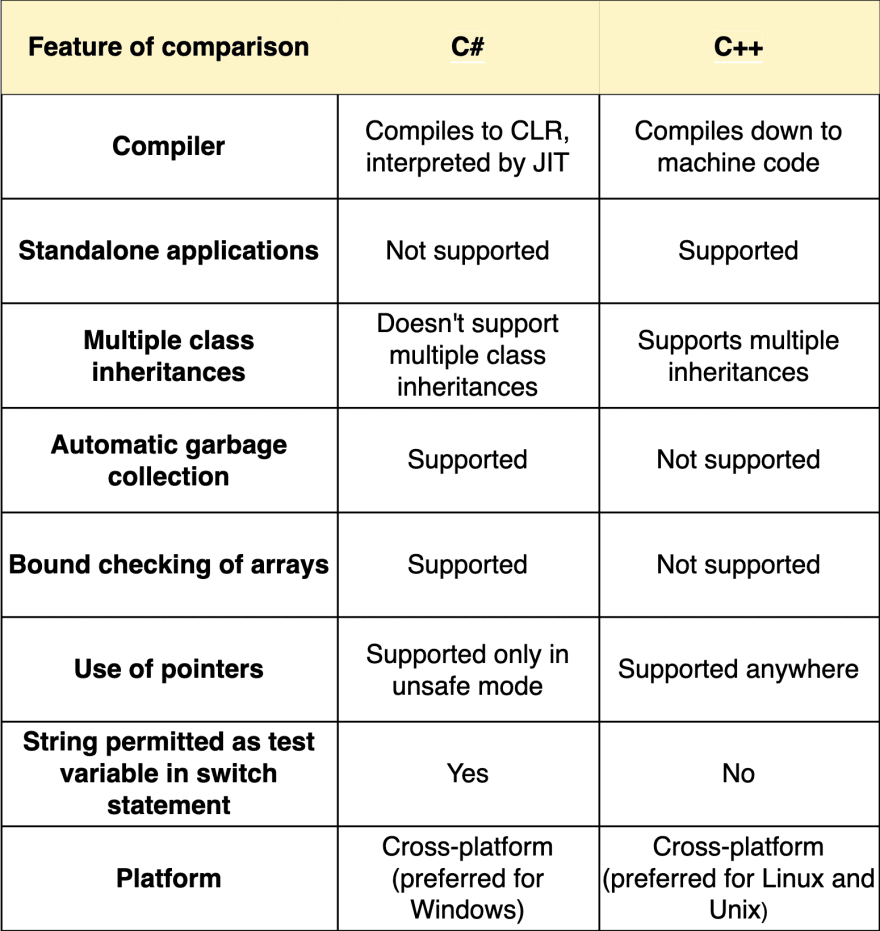 You can choose whether to learn C# or C++ based on your personal and professional goals. Some important factors to consider are the industry you want to work in, the amount of time you’re willing to spend learning a language, and the types of applications you want to develop.

Here are some factors to consider when choosing which programming language to learn:

We've seen that C# and C++ are distinct languages that are often used for the same purposes. They are popular for web development, game development, mobile development, and software development across various platforms. They are classified as different levels of languages and their code is processed differently by machines.
Whatever you choose, there are certainly advantages for learning either language. If you have the time and the inclination, you may even decide to learn both!

Continue learning about C# and C++

Why Should We Migrate to .NET Core?

I'm a Senior Software Engineer at Uber! Quick tips that helped me get hired

How to find an Open Source project to contribute to on GitHub?