Client-side applications are getting complex and the user expects things to happen in real-time. This means that the state management of our application plays a major role in defining the user experience. Svelte offers a store that can help in bringing the reactivity of something like RxJS for our data and it is very simple to get started.

What is a store?

A store is a place to put your data and get access to that data from multiple components. Since Svelte makes it easy for this store to be reactive, it is easy to subscribe to these values and update the component UI when there is a change in data by a different component.

The previous paragraph might be too abstract. Let's get into an example to understand the concept of stores. 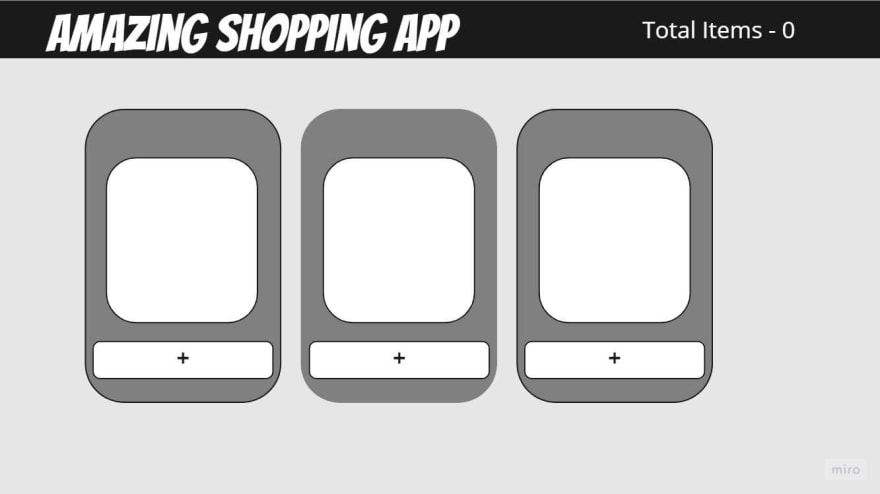 Let's assume, we have an amazing shopping app where we are displaying a list of items for the user to add. The app might be split into multiple small components like below

Now, when the user clicks on the + button in the item, the app needs to update the total items in the cart in the Navbar. So you will require some way to communicate between the two components. This can be achieved by passing an event up to the parent but that is not an ideal solution. So we get to the concept of stores in Svelte.

The data of the cart is stored in the Svelte store and any component which needs access to that data can subscribe to the data and get notified when the data changes.

Creating a simple store in svelte

Svelte allows you to define your store and import them into your component as needed. You can create a custom store as well which should have a subscribe method that takes in a function and calls that function when the value changes. This gives a lot of flexibility as you can add more abstraction on top of your stores to allow the components to only call methods instead of directly changing the store values

Enough talk, let's create a simple default store that will just store the count of the shopping cart items. Create a new file called store.ts and add the following

We are creating a store variable cartItemCount and assigning zero as the initial value. writable from svelte means that the store can be updated by any of the components. There are three types of inbuilt stores from svelte. You can define your custom store if needed.

Reading and display value from the store

This tutorial uses TailwindCSS and Vite Svelte setup. You can mostly ignore the CSS classes which are just meant to make the app look decent. If you want to do the same setup, you can check this post.https://www.eternaldev.com/blog/svelte-with-vite-and-tailwindcss/

There are two ways to do this. First is a long way which will help us understand what is going on. The second way makes it much easier and svelte provides a nice shortcut to help with the developer experience

Let's break down the above code.

Fortunately, the Svelte team recognized that this might be considered a lot of boilerplate code to use the store in your component, so they have a shortcut that will do the same thing in the background.

We can use the $ symbol in front of the store variable and it means that subscribe and unsubscribe are taken care of when Svelte converts your code to Javascript which is a great time saver and nicer to read.

The above code has the same exact behavior as the previous one with less code to write. Awesome right!!

Following our earlier example, we will create a separate component for updating the store value. Create a new file called ShopItem.svelte and add the following code.

That's it. We will be able to see that value in the Navbar automatically getting updated at the click of the button.

Stores in svelte are a really powerful feature that can be used to create a nice modular component and still maintain good reactivity in the application. Hopefully, this simple example will get your gears running on how to use the store to accomplish state management in Svelte.

How to pass arguments to events like on:click in Svelte

Once suspended, eternaldev will not be able to comment or publish posts until their suspension is removed.

Once unsuspended, eternaldev will be able to comment and publish posts again.

Once unpublished, all posts by eternaldev will become hidden and only accessible to themselves.

If eternaldev is not suspended, they can still re-publish their posts from their dashboard.

Once unpublished, this post will become invisible to the public and only accessible to Eternal Dev.

Thanks for keeping DEV Community 👩‍💻👨‍💻 safe. Here is what you can do to flag eternaldev:

Unflagging eternaldev will restore default visibility to their posts.