When designing web applications, (especially the traditional HTML kind), you will at one point have to figure out how to log a user in and keep them logged in between requests.

The core mechanism we use to achieve this are cookies. Cookies are small strings sent by a server to a client. After a client receives this string, it will repeat this in subsequent requests. We could store a 'user id' in a cookie, and for any future requests we'll know what user_id the client was.

But this is very insecure. The information lives in the browser, which means users can change USER_ID and be identified as a different user.

The traditional way to solve this is what's known as a 'session'. I don't know what the earliest usage of sessions is, but it's in every web framework, and has been since web frameworks are a thing.

Often, sessions and cookies are described as 2 different things, but they're really not. A session needs a cookie to work.

Instead of a predictable user id, we're sending the client a completely random session id that is impossibly hard to guess. The ID has no further meaning, and doesn't decode to anything. This is sometimes called an opaque token.

When a client repeats this session id back to the server, the server will look up the id in (for example) a database, which links it back to the user id. When a user wants to log out, the session id is removed from the data storage, which means the cookie is no longer associated with a user.

Where is the session data stored?

Languages like PHP have a storage system for this built in, and will by default store data in the local filesystem. In the Node.js ecosystem, by default this data will be in 'memory' and disappear after the server restarts.

These approaches make sense on developer machines, or when sites were hosted on long-lived bare-metal servers, but these days a deploy typically means a completely fresh 'system', so this information needs to be stored in a place that outlives the server. An easy choice is a database, but it's common for sites to use systems like Redis and Memcached, which works for tiny sites, but still works at massive scales.

Over 10 years ago, I started working a bit more with OAuth v1 and similar authentication systems, and I wondered if we could just store all the information in the cookie and cryptographically sign it: 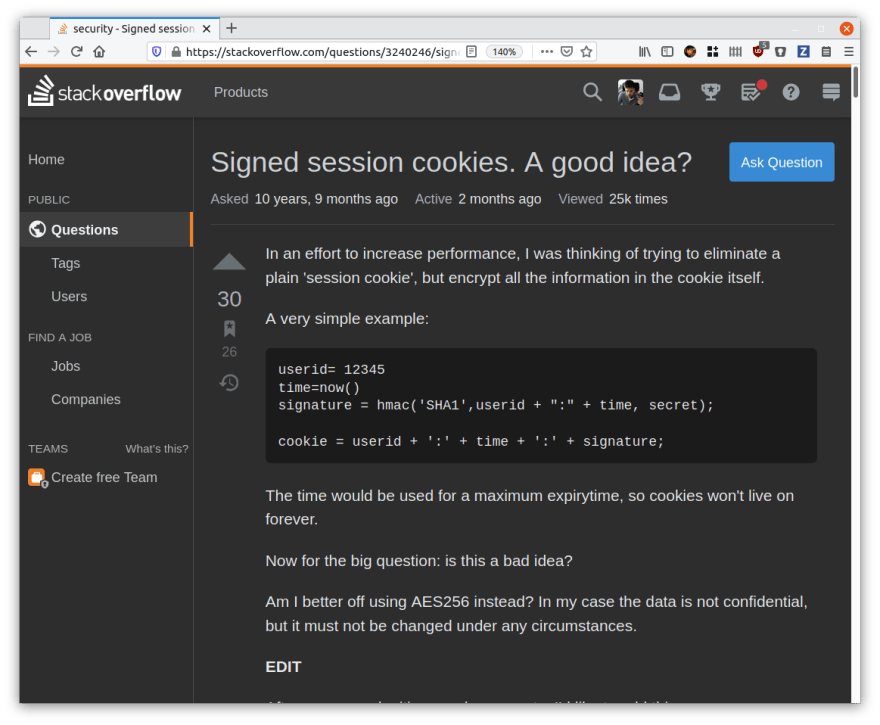 Despite getting some good answers, I didn't go through with it as I didn't feel confident enough in making this secure, and I felt it required a better understanding in crypto than I did.

A few years later, we got JWT, and it's hot shit! JWT itself is a standard for encrypting/signing JSON objects and it's used a LOT for authentication. Instead of an opaque token in a cookie, we actually embed the user_id again, but we include a signature. The signature can only be generated by the server, and it's calculated using a 'secret' and the actual data in the cookie.

This means that if the data is tampered with (the user_id was changed), the signature no longer matches.

So why is this useful? The best answer I have for this, is that it's not needed to have a system for session data, like Redis or a database. All the information is contained in the JWT, it means your infrastructure is in theory simpler. You're potentially making fewer calls to a data-store on a per-request basis.

There are major drawbacks to using JWT.

First, it's a complicated standard and users are prone to get the settings wrong. If the settings are wrong, in the worst case it could mean that anyone can generate valid JWTs and impersonate anyone else. This is not a beginners-level problem either, last year Auth0 had a bug in one of
their products that had this very problem.

Auth0 is(or was? they just got acquired) a major vendor for security products, and ironically sponsor the jwt.io website. If they're not safe, what chance does the general (developer) public have?

However, this issue is part of a larger reason why many security experts dislike JWT: it has a ton of features and a very large scope, which gives it a large surface area for potential mistakes, by either library authors or users of those libraries. (alternative stateless tokens to JWT exists, and some of them do solve this.)

A second issue is 'logging out'. With traditional sessions, you can just remove the session token from your session storage, which is effectively enough to 'invalidate' the session.

With JWT and other stateless token this is not possible. We can't remove the token, because it's self-contained and there's no central authority that can invalidate them.

This is typically solved in three ways:

Good systems will typically use the first two. An important thing to point out is, in order to support logout, you'll likely still need a centralized storage mechanism (for refresh tokens, revocation lists or both), which is the very
thing that JWT were supposed to 'solve'.

Sidenote: some people like JWT because it's fewer systems to hit per request, but that contradicts with being able to revoke tokens before they expire.

My favourite solution to this is keep a global list of JWTs that have been revoked before they expired (and remove the tokens after expiry). Instead of letting webservers hit a server to get this list, push the list to each server using a pub/sub mechanism.

Revoking tokens is important for security, but rare. Realistically this list is small and easily fits into memory. This largely solves the logout issue.

A last issue with JWT is that they are relatively big, and when used in cookies it adds a lot of per-request overhead.

All in all, that's a lot of drawbacks just to avoid a central session store. It's not my opinion that JWT are universally a bad idea or without benefits, but there is a lot to consider.

Why are they popular?

One thing that's surprised me when reading tech blogs, is that there is a lot of chatter around JWT. Especially on Medium and subreddits like /r/node I see intros to JWT on an extremely regular basis.

I realize that that doesn't mean that 'JWTs are more popular than session tokens', for the same reason that GraphQL isn't more popular than REST, or NoSQL than relational databases: it's just not that interesting to write about the technology that's been tried and tested for a decade or more (See: Appeal to novelty). In addition, subject experts that write about new solutions are likely going to have different problems & scale than the majority of their own readers.

However, these new technologies create a lot more buzz than their simpler counterparts, and if enough people keep talking about the hot thing, eventually this can translate to actual adoption, despite it being a sub-optimal choice for the majority of simple use-cases.

Adopting complex systems before the simple option is considered is something I see happening more, but it surprised me for JWT.

As an exercise, I looked up the top most popular (by votes) posts on /r/node that mention JWT. I was going to go over the first 100, but got bored after the top 12.

From these 12 articles and Github repos:

Except 1, the quality of these highly upvoted posts was extremely low, the authors were likely not qualified to write about this and can potentially cause real-world harm.

All this at least confirmed my bias that JWT for security tokens is hard to get right.

On JWT and scale

Going through tons of Reddit posts and comments also got me a more refined idea of why people think JWTs are better. The top reason everywhere is: "It's more scalable", but it's not obvious at what scale people think they'll start to have issues. I believe the point where issues start to appear is likely much higher than is assumed.

Most of us aren't Facebook, but even at 'millions of active sessions', a distributed key->value store is unlikely going to buckle.

Statistically, most of us are building applications that won't make a Raspberry Pi break a sweat.

Using JWTs for tokens add some neat properties and make it possible in some cases for your services to be stateless, which can be desirable property in some architectures.

Adopting them comes with drawbacks. You either forego revocation, or you need to have infrastructure in place that be way more complex than simply adopting a session store and opaque tokens.

My point in all this is not to discourage the use of JWT in general, but be deliberate and careful when you do. Be aware of both the security and functionality trade-offs and pitfalls. Keep it out of your 'boilerplates' and templates, and don't make it the default choice.

Thanks to Nick Chang-Fong and Dominik Zogg for providing feedback and suggestions to this article!

🌈 Show me your DockerHub public images in your terminal

Evert Pot
If you could start a company, what would it be?
#discuss #career #entrepreneur
Dear Project Managers, Stop Micromanagement Now!
#career #productivity
What was your win this week?
#discuss #weeklyretro

Once suspended, evertp will not be able to comment or publish posts until their suspension is removed.

Once unsuspended, evertp will be able to comment and publish posts again.

Once unpublished, all posts by evertp will become hidden and only accessible to themselves.

If evertp is not suspended, they can still re-publish their posts from their dashboard.

Once unpublished, this post will become invisible to the public and only accessible to Evert Pot.

Thanks for keeping DEV Community 👩‍💻👨‍💻 safe. Here is what you can do to flag evertp:

Unflagging evertp will restore default visibility to their posts.