The example below shows you how to do it:

Check it on jsFiddle

In web applications the browser implementation of ECMA-262 has an object called window that uses as a delegate to a Global Object, so all the way we can access him very simply:

Because all new variables and functions are placed under the Global Object, there is a very high chance of name collision. As we know, JavaScript is loosely typed language and as such he is not preserving a type for created variables. So, all variables can overhead other variables just by using the same name. This is a name collision that we talked about before.

To prevent a name collision we can use a number of techniques such as using namespaces, using modules, and more.

Namespaces are objects that created under Global Object and hold variables and functions. Think about it like a tree. A tree has a root (Global object) and branches. Every branch is a new namespace. 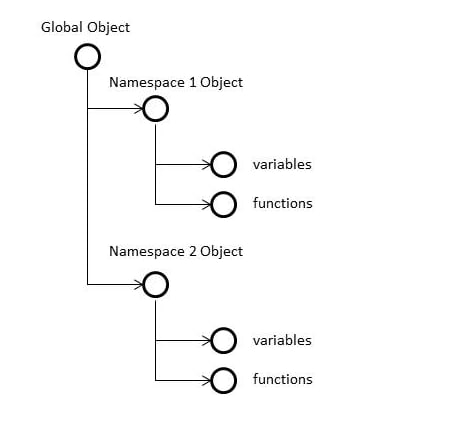 To implement it in JavaScript we use next code:

The left side of the example above simply declares a variable for our namespace. Right side a little bit more complicated. First of all, we try to get a namespace with the same name, if declared somewhere in the application. This technique prevents the recreation of the same namespace and not allow us to overhead his logic. Another pro of this technique is that we can use the same namespace in several files. Anyway, if a namespace was not declared before in application, we simply assign the variable with the empty object and thereby create a new namespace.

As we know in JavaScript we can create a new object in two ways. First way is to use the new keyword:

Second way is to use object literal that is commonly used way. The big pro of this way is that you can encapsulate a creation of an object. The previous example can be rewritten as follows:

Two ways above show us how to create a simple JavaScript object. It’s fine, but what if I want to create number of rectangles in my application? Do I need to duplicate that code for every rectangle instance? The answer, of course, is no. We can use a constructors. Two previous examples can be rewritten with constructor as follows:

Constructors in ECMAScript are used to create specific types of objects. Constructors provide us with the ability to create new object instances in a simple way. More of that, every instance created with a constructor can be identified which type is he.

Try it in jsFiddle

So until now, we can understand 3 important things:

But when we look at constructors we can understand that it is just regular JavaScript function and as such, when placed on global scope, can be easily overwritten by another function with same name. So we will want to place it under namespace as well. It can look like follows:

It’s good, but when we will expect a constructor of the rectangle, we will see that there is an anonymous function so the prototype will be of the regular Object type.

What we want, is to be able with a namespace to look at prototype and to identify that this object is instance of Rectangle. I still can use instanceof operator and it’s smart enough to say me that is a Rectangle, but as a developer I will like to see it in my DevTools as well and to know that object prototype is Rectangle. To achieve that, we can use a next trick: