One of the most misunderstood concepts in testing is nondeterminism. So let's first quickly clarify some notions. We are testing a system by executing test cases on it. The test cases are derived from some kind of specification or model of the system. A test case gives inputs to the system, and observes outputs. Based on the outputs, the test case can either pass or fail. Failing means that an output has been observed, which does not conform to the specification out of which the test case has been derived.

People may say "every system is deterministic by definition". This is true in some sense, but very wrong in very many pragmatic testing situations. For instance, imagine that the coffee machine is some commercial one in some office where you do not even see if there is enough water and beans in it. So even though the machine is in one specific state, you simply do not know that state. But you can still deal with it: you press the button, and when you do not get coffee, you ask the service to refill the water and beans (or you just kick the machine and walk away). Doing so is what you can call a nondeterministic test case. It is a test case, which can deal with several states of the system, meaning depending on what the test case observes (coffee or no coffee), the test case proceeds in one direction or another.

Let's look at some more common examples. For instance, consider you are testing an online shop. So you query a product. Now you may get two answers (i.e., outputs): the item is in stock, or it is sold out. When it is in stock, you proceed with testing the order process. If it is sold out, you try another product. Also here, the system is in one state, but you do not know that state. To be able to deal with both states, you need nondeterminism.

Or, consider you are testing a system at some observation point, where you do not know the exact ordering in which events occur. This is very common for complex systems. But you also simply do not care in which ordering some events occur. If, when booting your operating system, your messenger starts first, and then the calendar application, or the other way round, does not matter. But both must start, that matters. Also here you need nondeterminism to deal with it.

So, nondeterminism is a very important and useful means to specify and test systems. Unfortunately, many tools are not capable of dealing with nondeterminism. You can only specify one allowed output in your test case, and all others are considered as wrong. This is a very fundamental limitation of these tools.

But, even worse, when the tool allows to do nondeterminism, people tend to use it wrong. Look at an example from a project I worked for as a test architect: we were developing a web page which allows two ways to log into the site, either via some customer number or via email. You can switch between the two options by clicking some GUI element in the login module. Initially when loading the page it is always in the "login via customer number" option.

While I was working on a test case which first logs a member in (via customer number) I checked the test code for this login method, and saw there basically something like this:

Why did the tester do this? Simple, this function is robust in the sense that it can deal with both cases:

Take a second to think why this may be bad testing code, though!

First of all, this code introduces nondeterminism to the test. We can now deal with a system being in two different states. Depending on which state we are in, we act differently. But we have also said, that this is only useful when we do not know in which state the system is! But, for our web page example, we know in which state the login module is, since initially it is always in the "login via customer number" state. And this is even a requirement since most customers use this variant to log in, so it must be the default. So, it actually is even a defect when we load the page and the login module is not in the "login via customer number" state, but in the "login via customer email" state. The problem is now, that we lost the power to find this defect by adding nondeterminism to the test code. If the login module is in the wrong state, the test case corrects it by switching to the correct login method.

Let me end this example by a very little bit of theory for all this. We are in the lucky position to have very solid test theories at hand to give all this considerations some foundation. The next picture shows the above example by referring to transition system based theories, like the most famous one - ioco - by Jan Tretmans. 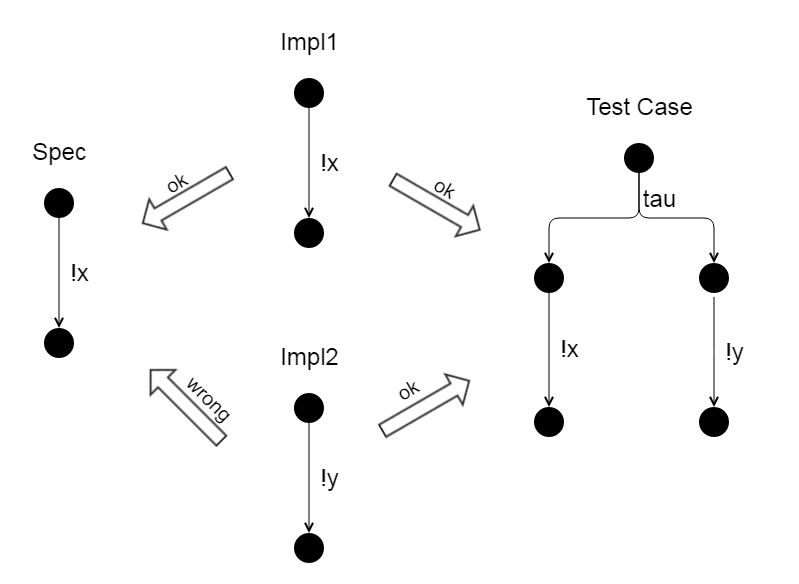 This may appear a bit nitpicking, but I find this wrong approach all the time, and I always need to argue since the tester thinks she or he wrote a very fancy method, which can deal with all kind of states of the system. And this is true! But it sucks for testing when we do not really need it, since it removes defect detection power.

Another very common example is test data. When testing a system, you should do everything for being able to control your test data (like which customers are in the system, what kinds of transactions has the customer done, which offers are shown to one specific customer, etc.). Only when you really cannot control this, you need nondeterminism - and then it is very very useful! But when you can control your test data, forget about nondeterminism here! And again, testers tend to write very fancy methods to somehow discover the available test data by analyzing the web page or database, trying for instance to find a specific customer transaction to continue with the test, etc. And then you always see disappointing faces when saying: we do not need that! We know the test data, we can even hardcode it in our tests, we know the state of the system, we do not need to learn it! Since learning always means allowing more states than just one.

Nondeterminism always adds complexity to your test code, you get all these conditionals, maybe exception handling and quite complex SQL statements, etc. So you definitely need to start writing tests for your tests and you lose stability and readability of your test code.

Once suspended, frantzen will not be able to comment or publish posts until their suspension is removed.

Once unsuspended, frantzen will be able to comment and publish posts again.

Once unpublished, all posts by frantzen will become hidden and only accessible to themselves.

If frantzen is not suspended, they can still re-publish their posts from their dashboard.

Once unpublished, this post will become invisible to the public and only accessible to Lars Frantzen.

Thanks for keeping DEV Community 👩‍💻👨‍💻 safe. Here is what you can do to flag frantzen:

Unflagging frantzen will restore default visibility to their posts.