In my previous article I described my simple demo-application, StellarGallery. A simple frontend for an art gallery where users can buy art using stellar cryptocurrency. The backend keeps track of orders and let customers download a high resolution image when payment is received.

In earlier projects I would have Dockerhub do the builds automatically after github updates, but this is now a paid option at Dockerhub so here I use a more manual approach.
I build docker images on my laptop and push them to DockerHub. I'm not planning on frequent updates and it's just a demo so I think its okay for now.
My production server is a Linode machine running Ubuntu. I will describe the setup details in the Details section below. 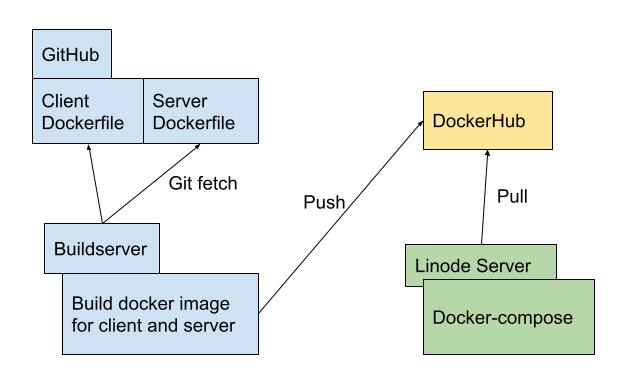 The Dockerfile for the React client is pretty common, I think.

Multi-stage build to make the build as small as possible.

This is how I build my Dockerfile and push it to DockerHub:

Pretty plain Dockerfile for Go, I guess, but I want to mention some hassle I had.

Originally I wrote the server to use SQLite as database. It worked well when run on my laptop, but gave me plenty of trouble when run in a Docker container on my Linode server. To build a container with SQLite I had to make a static build. My understanding is that this is because SQLite needs glibc. I used this build command in my Dockerfile:

The build command worked ok, but my server crashed at the strangest places when run in the container. I think the crashes were caused by some glibc conflicts.

In the end I gave up and converted to PostgreSQL. The ORM I'm using is Gorm which is using the pgx, a pure Go driver for PostgreSQL. This worked like a charm. To me, it seems like a good rule to avoid static builds if possible.

I also want to explain the last line in my Dockerfile, CMD ["--account_public_key"]. The string is just a placeholder and is supposed to be overridden in the Docker-compose.yml file.

This is how I build my Dockerfile and push it to DockerHub:

I would have thought my docker-compose.yml file to be an ordinary one, but I must admit that I had some trouble creating it and especially the stuff involving Traefik was a challenge. It seems to me that configuring Traefik has evolved a bit and this must be considered when looking at examples.
I chose to set up redirection from port 80->443 and connecting middleware for compression to the frontend. This seems to be considered best practice for frontends. At least Lighthouse gives you credit for implementing these things.

I really like Traefik. They seem to have achieved their vision of simplifying networking. From a programmers point of view it's pleasant to be released of all the burden setting up for example https, letsencrypt, port redirection and response-compression.

DOOM! on the #emfcamp TiDAL badge

The Cost of Production Blindness

Once suspended, gunstein will not be able to comment or publish posts until their suspension is removed.

Once unsuspended, gunstein will be able to comment and publish posts again.

Once unpublished, all posts by gunstein will become hidden and only accessible to themselves.

If gunstein is not suspended, they can still re-publish their posts from their dashboard.

Once unpublished, this post will become invisible to the public and only accessible to Gunstein Vatnar.

Thanks for keeping DEV Community safe. Here is what you can do to flag gunstein:

Unflagging gunstein will restore default visibility to their posts.