Usually Kubernetes clusters and their worker nodes are not exposed to the public Internet but the apps running in them are.

Note: We at SocketXP are looking for beta customers to evaluate and provide feedback for our Kubernetes Remote Access Solution. Please feel free to reach out to us at: support@socketxp.com

You are expected to have a working Kubernetes Cluster with atleast one worker node in it. And you could reach those worker nodes now.

Overall Strategy -- In a nutshell

Download and install the SocketXP agent on your Kubernetes Worker Node.

Step 2: Get your Authentication Token

Sign up at https://portal.socketxp.com and get your authentication token.

Use the following command to authenticate you node with the SocketXP Cloud Gateway using the auth token.

Use the following command to create a secure and private TLS tunnel VPN connection to the SocketXP Cloud Gateway.

Where TCP port 22 is the default port at which the SocketXP agent would listen for SSH connections from any SSH clients. The "--iot-device-id" represents a unique identifier assigned to the Kubernetes worker node within your organization. It could be any string value but it must be unique for each of your worker node.

SocketXP also has the option to setup and use your private/public keys to remote SSH into your worker nodes.

You could now remote SSH into your Kubernetes worker node by clicking the terminal icon as shown in the screenshot below. 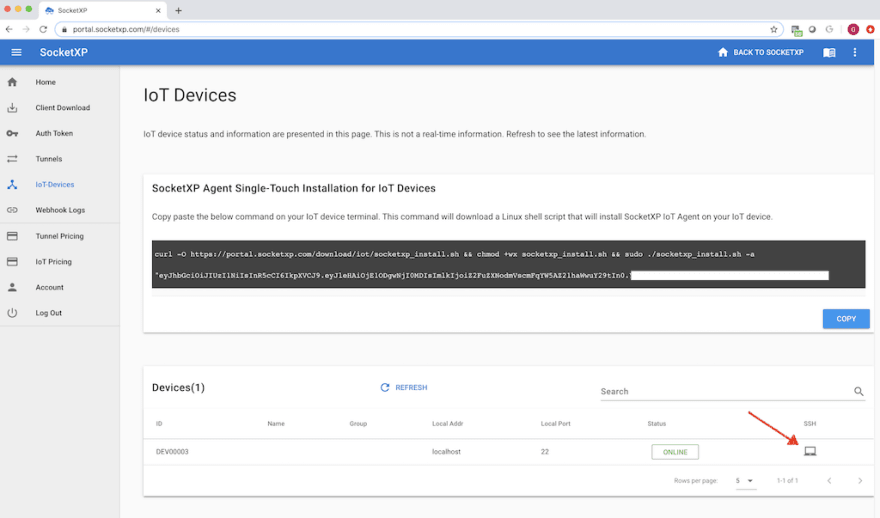 Next, you'll will be prompted to provide your SSH login and password.

Once your credentials are authenticated with your SSH server you'll be logged into your device's shell prompt.

The screen capture below shows the "htop" shell command output from an SSH session created using the XTERM window in the SocketXP Portal page. 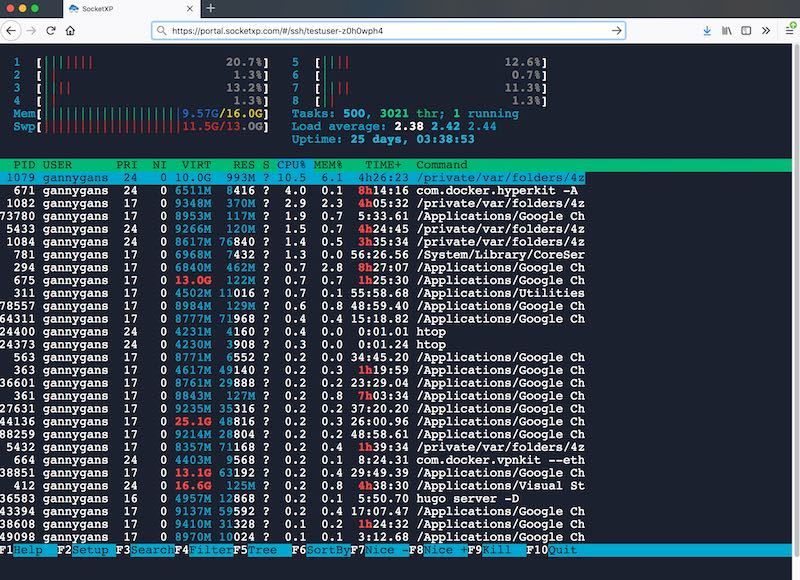 This is an alternate method for SSH into your private worker node from a remote location using the SocketXP Remote SSH Access solution.

If you don't want to access your IoT device or RPi from the browser(SocketXP Portal) and you want to access it using an SSH client (such as PuTTy) installed on your laptop or desktop, follow the instructions below.

First download and install the regular SocketXP agent software on your accessing device (such as a laptop running Windows or Mac OS). Next, configure the agent to run in slave mode using the command option "--iot-slave" as shown in the example below. Also, specify the name of the private TCP tunnel you want to connect to, using the --tunnel-name option.

Why this is important?:
SocketXP IoT Agent when run in Slave Mode acts like a localproxy server. It proxies all connections to a user-specified local port (10111 in the example above) in your laptop/PC to the SocketXP Cloud Gateway using a secure SSL/TLS tunnel. Also the SocketXP Agent authenticates itself with the SocketXP Cloud Gateway using your auth token. This ensures that only legitimate, authenticated users are permitted to access your private worker nodes. SocketXP ensures Zero-Trust security on all connected devices.

Now you can SSH access your Kubernetes Worker Node using the above SocketXP local endpoint, as shown below.

Tip:
You can also use PuTTY SSH client to remote SSH into your device using the same parameters show above. Similarly, you can use PuTTY or FileZilla to perform SFTP actions such as file upload and file download to your private Kubernetes Worker Nodes.

Note: We at SocketXP are looking for beta customers to evaluate and provide feedback for our Kubernetes Remote Access Solution that includes Worker Node/Pod SSH access/Microservice Remote Access/Database Remote access. Please feel free to connect with us at: support@socketxp.com

This article was originally published at: https://www.socketxp.com/blog