Traditionally, enterprises use SSH public private key based authentication for SSH login to servers - both in-house and in the cloud.

As a result, the server and user onboarding process is usually laborious, slow and cumbersome. At scale, the problem only gets magnified and the key distribution become really messy.

The solution to all the above security problems is to use SSH certificates for SSH login and authentication.

How SSH Certificate based authentication works:

An organization’s security policy could decide the lifetime of a certificate issued to its hosts and users.

When a user connects to a server for the first time, no weird cryptic messages will be displayed on the screen to identify the fingerprint and trust the host key. The authenticity of the host the user is trying to connect to will be automatically verified using the Host CA Certificate stored locally in the user’s machine.

Drawbacks of SSH certificate based authentication:

User identity is verified using IAM software such as Microsoft Azure Active Directory, AWS IAM or Okta or other IAM solutions. User roles and groups defined in the IAM will be used to generate SSH certificates for the user.

User SSH certificates expire in 8 hours by default and can be configured to suit an organization’s security policy, to any value like 4 weeks or 30 secs or so.

Once users use the SSH certificate to login to a host, they can continue with that SSH session for any longer even if the certificate expires. But, if they exit from the SSH session and need re-login, the users need to SSO login again using their MFA credentials to generate a new SSH certificate.

Because user SSH certificates are short-lived, no certificate cleaning or housekeeping is required in the host or user machines, when a user leaves an organization or when teams get dismantled. The user certificate becomes invalid the next day.

Components of the BastionXP Solution:

Note: BastionXP Bastion Host solution can be configured to work as a pure play solution or work along with OpenSSH server and OpenSSH client software. 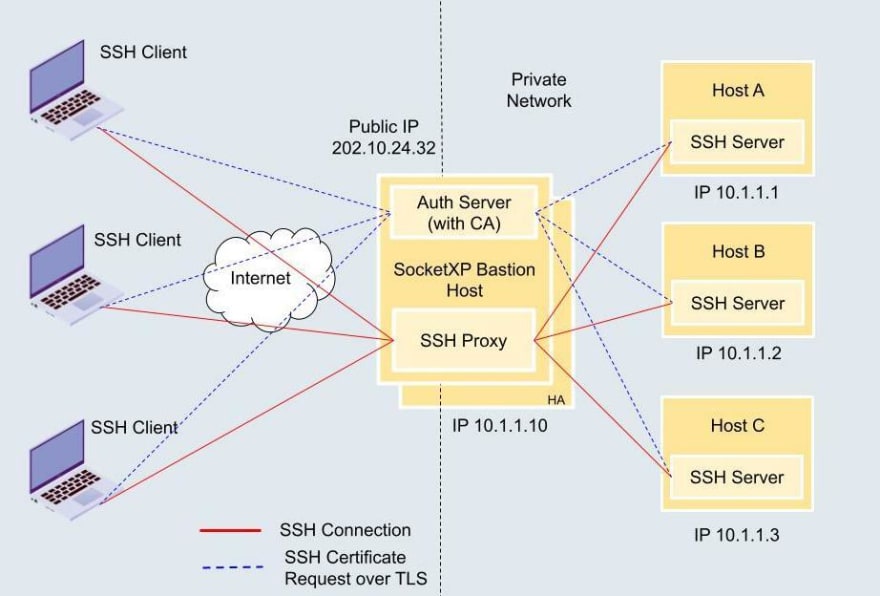 The ** BastionXP bastion host** has a builtin auth server which does the PKI/CA functionality. It can also perform SSH proxy or Jump Host functionality to connect to hosts that exist safely behind it, protected from the internet.

The ** BastionXP SSH server (sshd)** implementation runs on each host server, talks to the auth server in the BastionXP bastion host, downloads a host certificate from the auth server to the host and has the ability to record SSH sessions for auditing and playback purposes.

BastionXP can be used in any brownfield deployments where OpenSSH servers and clients are already in use and is preferred over the BastionXP SSH server and client software. In such a scenario, BastionXP Bastion Host’s SSH proxy (Jump Host) functionality can be disabled and BastionXP would simply run in the PKI/CA only mode.

BastionXP could be deployed in three different ways. We’ll discuss each one of them in detail below.

SSH host certificates need to be generated by an admin using a BastionXP provided API executed from the host machines running OpenSSH server. Usually, SSH host certificates have a very long validity period. For example: 4 weeks, 26 weeks, or 52 weeks. This is a configurable value and can be set according to an organization’s security policy.

Users need to download, install and use a simple CLI tool provided by BastionXP to login into their SSO provider using MFA and download the short-lived user SSH certificates from the BastionXP CA to their laptops or a desktops. Users need to use this CLI tool only once everyday when they begin their work in the morning because the short-lived user certificate will be valid for 8 hours by default (This validity period is a configurable value).

In the pure play mode, BastionXP software will run everywhere in the network as an SSH server, SSH client and as an SSH Jump Host/CA server. The diagram below explains this mode of operation.

To know more about BastionXP Bastion Host solution and request for a demo, please contact us at: support@socketxp.com

This article was originally published at: https://www.bastionxp.com

Once suspended, gvelrajan will not be able to comment or publish posts until their suspension is removed.

Once unsuspended, gvelrajan will be able to comment and publish posts again.

Once unpublished, all posts by gvelrajan will become hidden and only accessible to themselves.

If gvelrajan is not suspended, they can still re-publish their posts from their dashboard.

Once unpublished, this post will become invisible to the public and only accessible to gvelrajan.

Thanks for keeping DEV Community safe. Here is what you can do to flag gvelrajan:

Unflagging gvelrajan will restore default visibility to their posts.