Whether you’ve looked at async/await and promises in javascript before, but haven’t quite mastered them yet, this article aims to help you to better understand the real effects of the nodejs async engine on your code execution flow.

Furthermore we'll do it visually, navigating the code execution flow in real-time thanks to Inspector. At the end of the article you'll find all the resources to quickly connect your nodejs application with Inspector.

In traditional programming languages, most operations happen synchronously. If you think about PHP, and about how you would read a file using PHP, you would end up with something like this:ù

The main thread will be blocked until the file is read, which means that nothing else can be done in the meantime, so we are sure that the script will echo the content of the file.

When you execute a synchronous script, you wait for each task to finish before moving on to another task.

As you can see in the image below, this behaviour become clear taking a look to the code execution timeline of a Laravel application. The endpoint below runs a bunch of query against the database and the redis server, and each task has been executed sequentially, one after the other.

When a task is finished another one is executed until the end of the program. 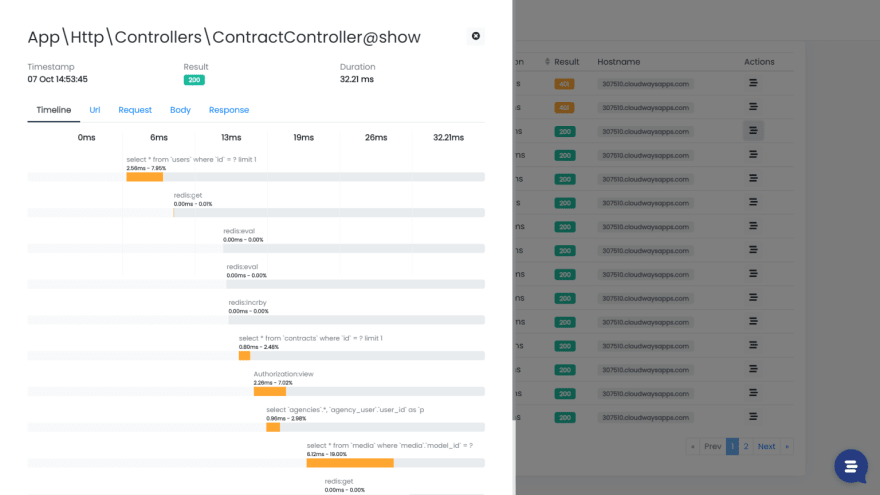 In an asynchronous environmet like Nodejs some tasks can be scheduled to be executed in parallel with the main script, leaving the main program to continue running subsequent tasks in the script.

Take a look on the following code example to read a file in nodejs:

We tried to read a file using the asynchronous interface of the fs module. It works as expected – the content variable will be printed out after “End of the script…”.

Once we started to read our file the execution continued, and the application printed End of the script.... Our callback was only called once the file read was finished.

We can see the parallel execution in anction using Inspector to have a visual representation of the code execution flow in an async context: 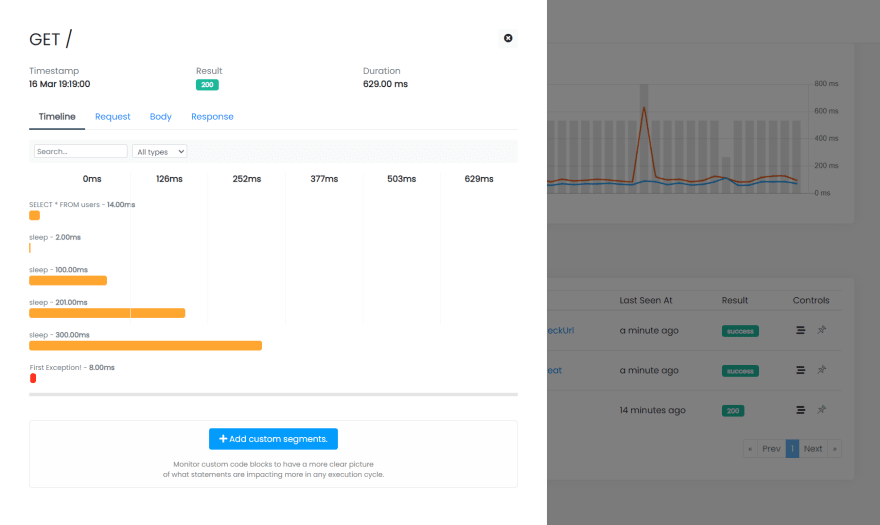 Where needed the tasks are executed simultaneously, each with its own duration. Code Execution Monitoring often allows us to become more aware of the behavior of the code we write. That's why its adoption continue to grow in the Nodejs and Laravel communities.

To understand the async nature of NodeJs more in-depth, you need to absolutely watch this video:

Next Up: Your First Node.js Server

In the next chapter, you will learn how to deploy your Node.js server using Laravel Forge – in the meantime if you have any questions, don’t hesitate to ask!

Avoid losing customers and money due to technical problems in your applications.

Once suspended, inspector will not be able to comment or publish posts until their suspension is removed.

Once unsuspended, inspector will be able to comment and publish posts again.

Once unpublished, all posts by inspector will become hidden and only accessible to themselves.

If inspector is not suspended, they can still re-publish their posts from their dashboard.

Thanks for keeping DEV Community 👩‍💻👨‍💻 safe. Here is what you can do to flag inspector:

Unflagging inspector will restore default visibility to their posts.