In this part, I will create empty scene which has a floor for character movement testing and the first character.

You can create new scene from menu File -> New Scene 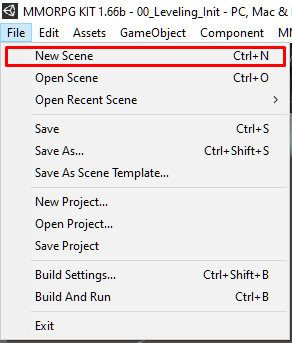 Delete Main Camera, because it will instantiate gameplay camera prefab as main character when player enter map scene, it should not have more than one main camera in the map scene 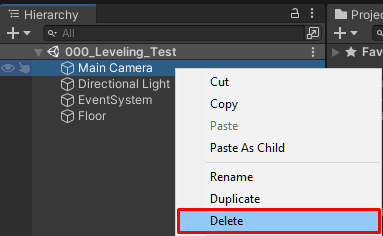 Map scenes must have EventSystem for UI event handling, so you have to add it by menu GameObject -> UI -> Event System 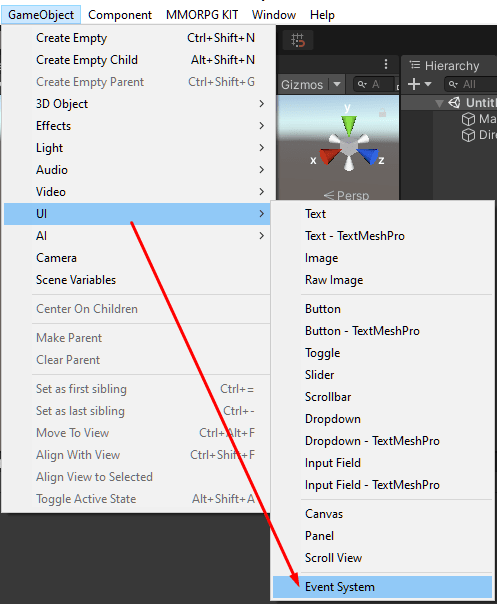 Then save the scene, I've set it name to 000_Leveling_Test, saved it to Assets/Leveling/Scenes/Maps.

And don't forget to add it to Scenes In Build 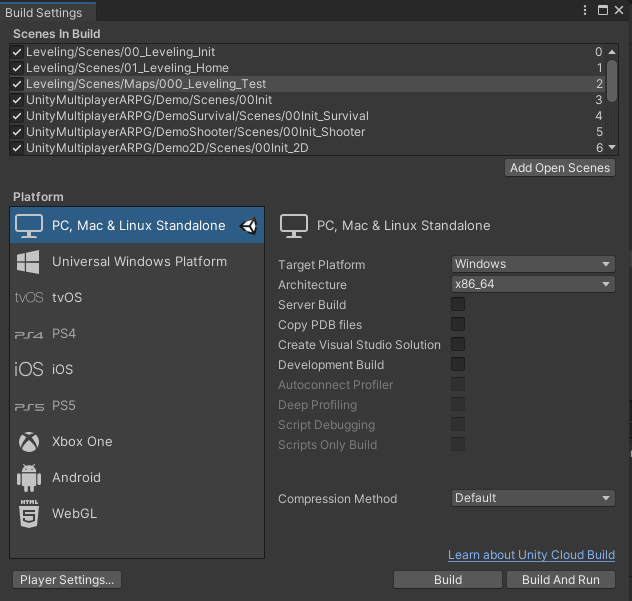 After that, you have to create map info for the map scene. 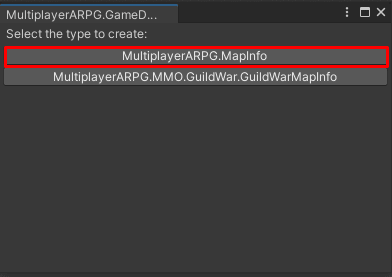 Then save it, I will save it to Assets/Leveling/GameData/Maps, name: 000_Leveling_Test 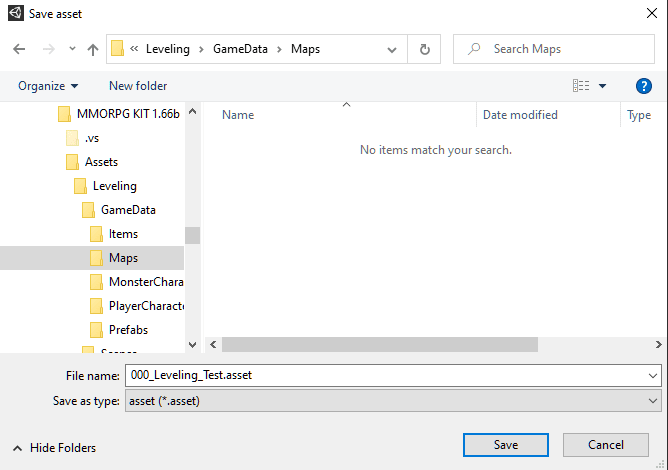 Before you use this tool, you have to prepare character model prefab

I will uses characters from Modular RPG Hero Polyart package

Then drag duplicated prefab to Assets/Leveling/Prefabs/PlayerCharacters and rename it to Human. 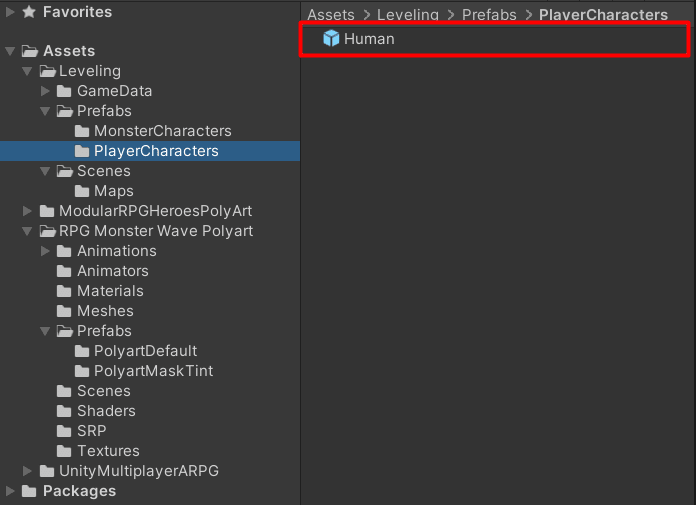 And delete all components except Animator

Then I will set filename to Human, set Character entity type to Player Character Entity, set Entity movement type to Character Controller, Select game database which created for this project (It is LevelingGameDb which was created in first part) and set FBX to prepared character model prefab

After set data in the dialog, press Create button, then it will shows folder choosing dialog, select folder which you want to save, Mine will be saved to Assets/Leveling/GameData/PlayerCharacters/Human 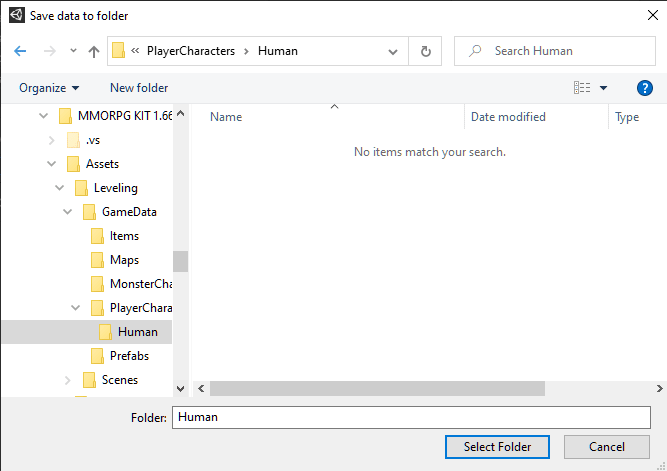 Then data will be created in selected folder 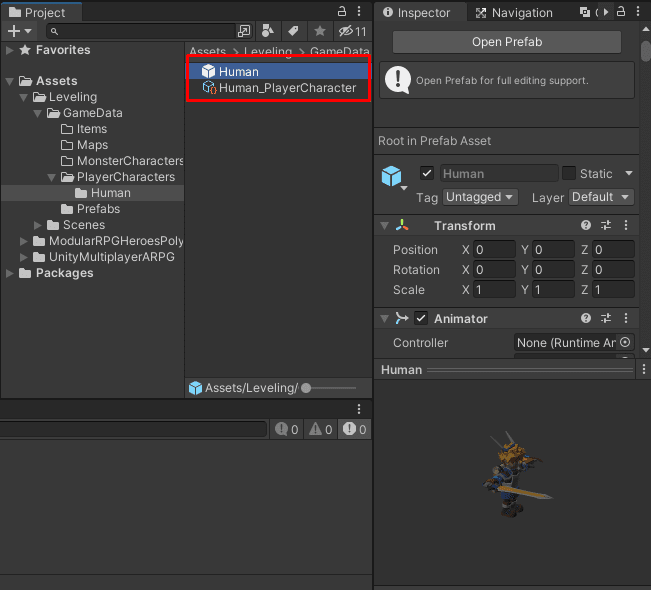 And also added to the game database 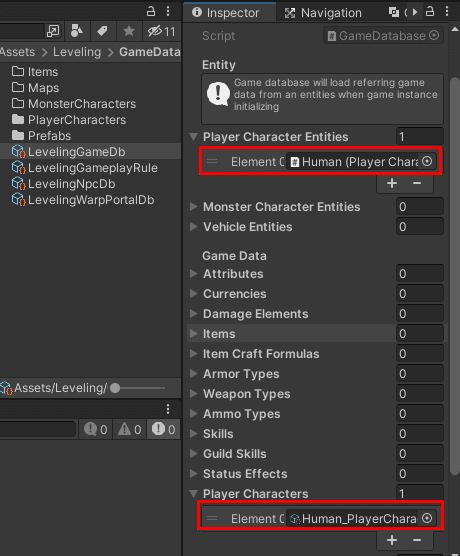 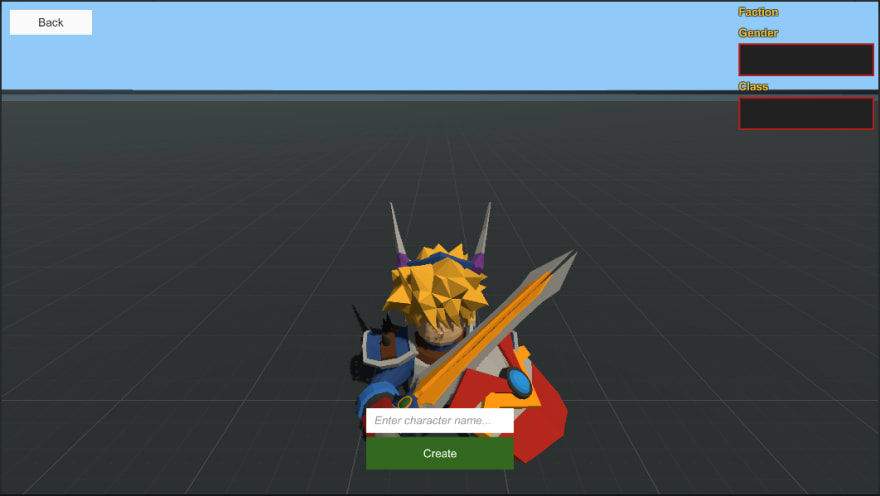 You'll noticed it has no animation, so we've to set it animation

Modular RPG Hero Polyart have an animations for characters, so I will show how to set character's animations by use animations from the package.

To set character's animations, you have to open the character entity prefab. For this character, I've saved it to Assets/Leveling/GameData/PlayerCharacters/Human so I will go to the folder and open prefab 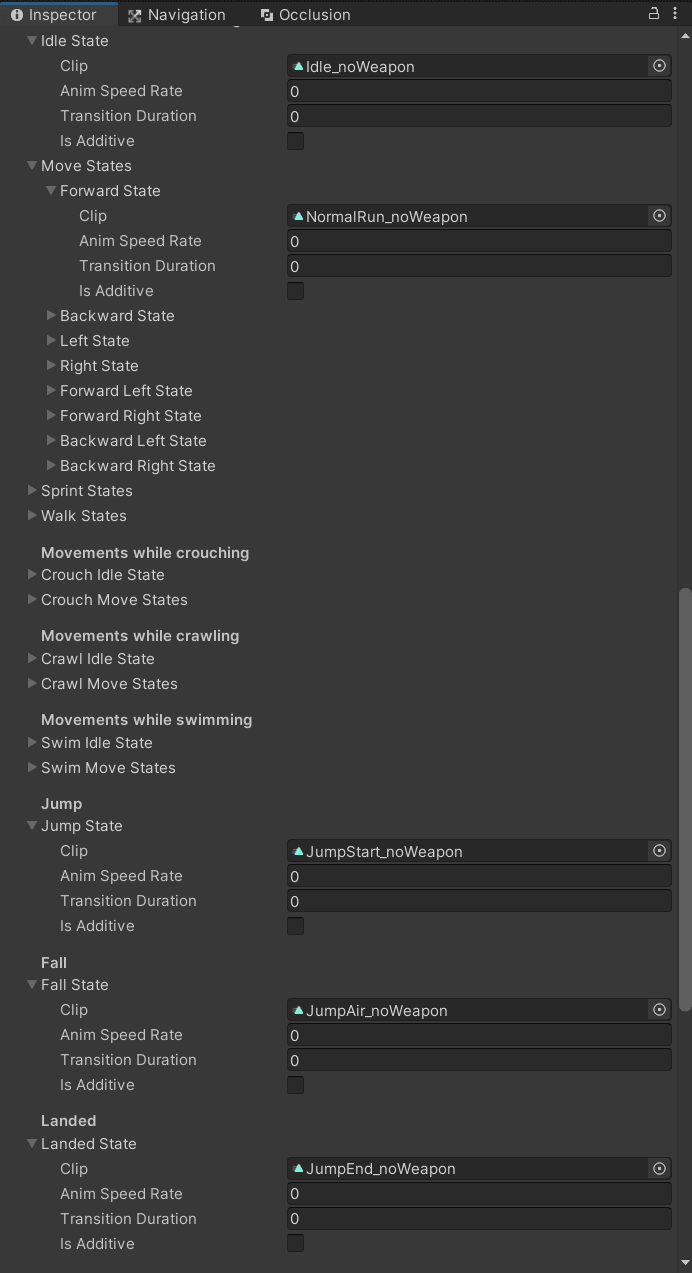 Then test it, create new character and move in map scene. (W/A/S/D/SPACE) 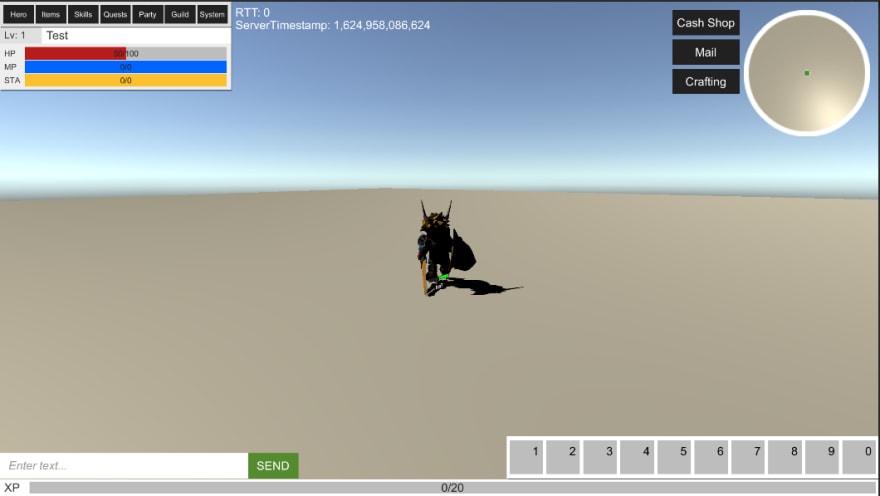 Character won't be able to play attack animation yet, so let's set it up. 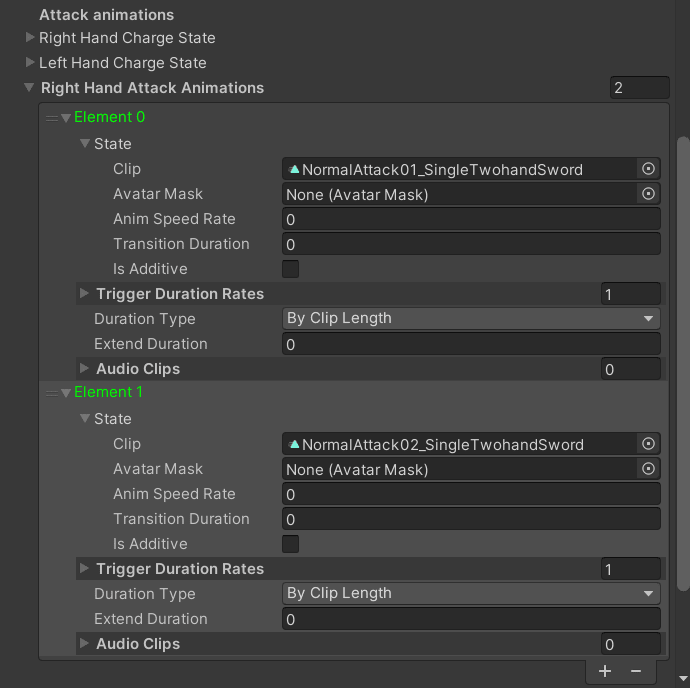 Then the important settings other than State -> Clip is Trigger Duration Rates which is rate of Clip's duration at when it should hit enemy, you can find it from animation clip previewing.

For example NormalAttack01_SingleTwohandSword clip, the character will swinged and should hit at 50%, so I will set Trigger Duration Rates to 0.5. 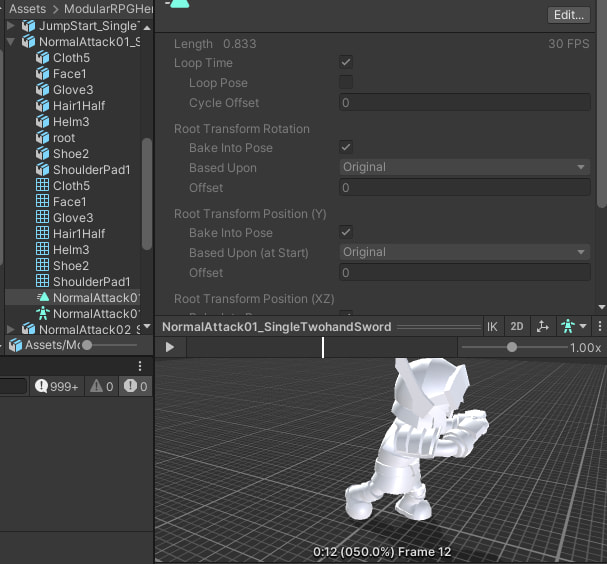 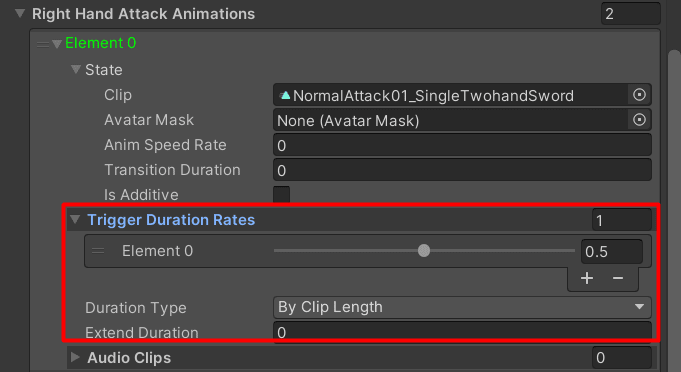 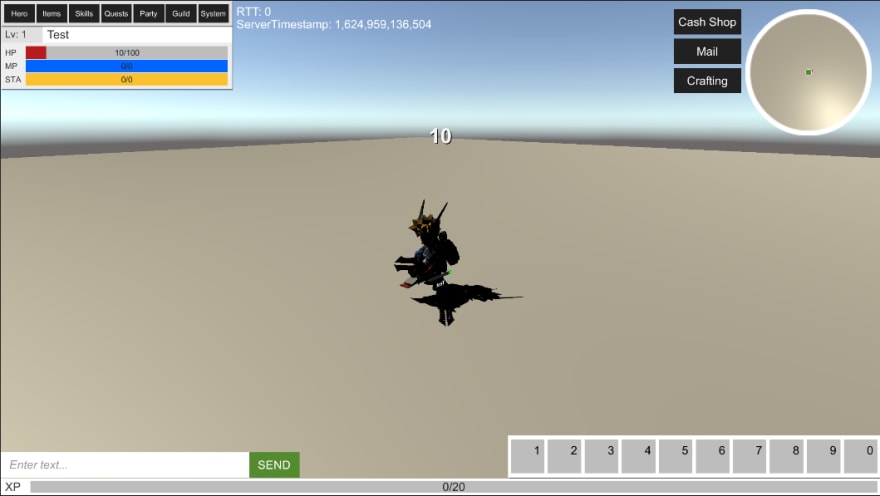 You can change default equipment by open character entity prefab, then activate/deactivate meshes as you wish

If you use other model packages, it may have difference mesh setup, you may not able to activate/deactivate to change default equipment

Extra - Why character's HP is decreasing 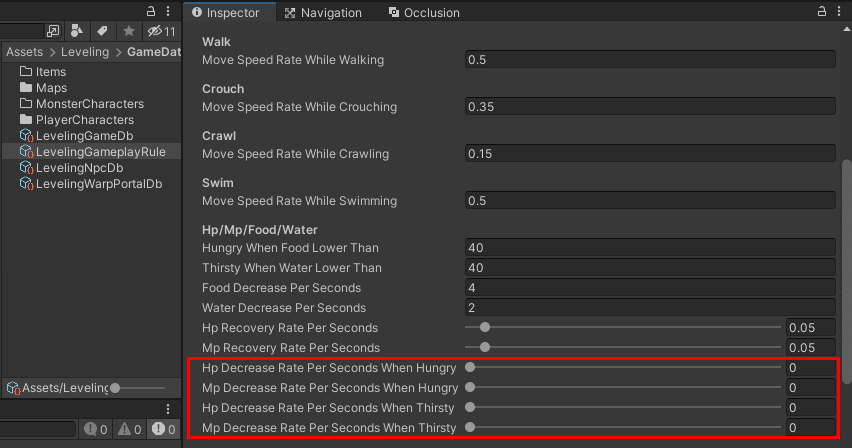 Testing Unity WebGL Build On Your PC Before Uploading