This behavioral pattern is used to represent the language, define its rules along with an interpreter to interpret these rules. Use the interpreter when a set of problems occurs frequently.

We map each sentence in the grammar to a specific type, and each type contributes to the process of interpreting the sentences. Now let’s take a look at the design of the interpreter pattern. 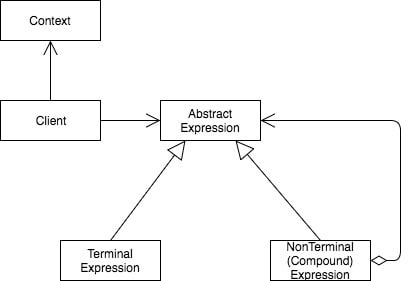 The interpreter design pattern defines a language with a simple grammar. It provides an object representation of each grammar rule, along with an interpreter to interpret the grammar.

The key expressions are number, addition, and subtraction. We identified the rules. We start with the Expression interface/protocol. There should be an interpret method with no parameters, and it just returns a number. Now that we have the protocol, we can create the number type which conforms to the protocol we defined. And for each addition subtraction multiplication and division, we create an Expression type conforming to the protocol.

Like the calculator example, we should map the domain to a language with a small set of rules. In other words, the grammar must be simple. If we can’t express the domain with a relatively small set of rules, the interpreter pattern might not be a good fit to solve that particular problem.

The disadvantage of the interpreter is that it can become complicated. The number of required types increases as the language becomes more verbose. This complexity can lead to maintenance and performance issues. Besides, the interpreter does not address parsing; thus, other approaches, like for example a parser generator, may be a better choice. The next pattern we’re going to look at is the iterator. It is one of the most popular patterns, and we use it even without thinking about it.