A while back, I posted about my initial foray into using Python to develop front-end web applications with React by using the Transcrypt transpiler.

Python and the Browser. I had to find out: Was it actually… | by JennaSys | Medium

Part of the initial learning process I went through was doing the official React tutorial, but using Python for the code instead of JavaScript. When I did that, I adhered to the structure of the application that was used in the tutorial pretty closely. Since then, I have been working with Transcrypt and React quite a bit more and have formed some of my own standards of practice for producing clean Python code in my React applications. In this post, I'll show you a few of those practices as I take the original class-based version of that program I did (which is what the React tutorial is based on), and convert it to use functional components and React hooks instead (which is all I use now).

My original version of the application has four files:

For this makeover, the CSS file and the index.html file will remain pretty much unchanged:

For most projects, I've been using the Parcel bundler which has a Transcrypt plug-in available for it. With that, I would normally have a few lines in the pyreact.py module to load the React libraries with a JavaScript ES5 style import that uses the Node require() function like this:

The section between the skip/noskip pragma lines isn't really needed other than to quiet the Python linter not being able to resolve the JavaScript object names. They are just Python stub declarations that will ultimately be ignored by Transcrypt thanks to the compiler directives.

The mappings in this file are where Transcrypt does a lot of its magic. I'm basically assigning a JavaScript object to a Python variable. From there, it can be used just like any other Python object. It can be imported into other Python modules, and its methods can be called. Even though I'm using JavaScript libraries, I only need to know the library's API to code to it using Python.

The render() function doesn't change from before, and is just a wrapper around the ReactDOM.render() method that lets us encapsulate the JavaScript calls that go along with it.

Most of the actual refactoring we did in this version of the application was in the tictacreact.py module. Beyond just turning the class components into functional components, we also changed how some of the state gets updated. While it didn't save us many lines of code, it is now a bit more modularized and (hopefully) more readable than what was there before.

In the main Game component, we made several changes starting with converting the class-based state object to individual useState() hooks instead. So the history and stepNumber state variables now have their own companion update functions.

Since the xIsNext state variable that was being used before is just calculated based on the value of another state variable, I changed it to be a local variable instead. It will get recalculated if a re-render happens due to a change in the state that it is based on.

To clarify what is being displayed at any given time, I also added the local variable board to hold the current board values as a convenience. Now, as determined by the stepNumber, we pull it out of the history list just once instead of every time we need to use it as we were doing before. This value also gets recalculated when a re-render happens.

The handle_click() function gets cleaned up a little, but it is still a bit busy since we need to make copies of the history and board squares in order to update them since we are working with immutable objects. Until Transcrypt adds the Python copy standard library to what it supports, you either have to use a JavaScript function to do that, or do it manually as we did here for history where we used a list comprehension:

For the list of previous moves that get displayed in the UI, instead of generating the list item elements in the Game component, we moved that functionality into its own Moves component. This change cleans up the Game component and makes the overall application structure a little more readable.

One of the practices I started doing was to deconstruct the values held in the props object into local variables rather than directly referencing them from props just when they are needed:

This practice accomplishes two things. First, by deconstructing all of the values right at the top of the function definition, I know exactly what props that component is expecting without having to search the entire function to figure it out. Second, it cleans up the code in the function where I actually use those values by not having to do the dictionary lookups in place.

The last somewhat subtle change we made is to put the handle_click() function and the board squares into a context variable:

Using this context variable saves us from having to pass these values down through several other layers of components that don't need them, just so that we can use them in the Square component.

In the Board component, we really cleaned it up in that it now just returns a div element with three Row components. And since we are now using the context variable, we no longer need to pass any props into it.

The Row component is something new we added with this refactor that clarifies conceptually what is being generated. Similar to the Board component, the Row component returns a div element containing just three Square components.

The Square component is now a bonafide React component instead of just an imperative function. Functionally it is the same as before, but we did add in the React useContext() hook to pull out the values we needed to use here:

Finally, we just made some minor optimizations to the calculate_winner() function from the earlier version.

To build the application, you just need to give Transcrypt the entry point of your application, and it will walk the dependency tree to transpile any other related modules:

We also gave it a few CLI options:

Once that is done, we need to serve up the generated files before we can open up the application in a web browser. A quick way to do this is using the HTTP server that comes with Python:

Then open the application: 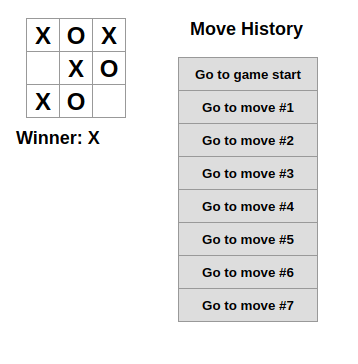 You can find all of the source code for this application here:

A live demo of this code (with source maps) is also hosted on GitHub Pages:

As someone that really likes Python and isn't a big fan of JavaScript, using Transcrypt to develop React applications with Python has been working out decidedly well for me so far. To share how I was doing it, I had started putting together an outline for a talk I was going to give at my Python meetup group. As it turned out, that outline kept growing, and I ended up writing an entire book about it instead. If you're interested, you can find out more about the "React to Python" book here: https://pyreact.com

Once suspended, jennasys will not be able to comment or publish posts until their suspension is removed.

Once unsuspended, jennasys will be able to comment and publish posts again.

Once unpublished, all posts by jennasys will become hidden and only accessible to themselves.

If jennasys is not suspended, they can still re-publish their posts from their dashboard.

Once unpublished, this post will become invisible to the public and only accessible to JennaSys.

Thanks for keeping DEV Community 👩‍💻👨‍💻 safe. Here is what you can do to flag jennasys:

Unflagging jennasys will restore default visibility to their posts.