We'll see how to build a cross-platform mobile app that allows users to upload and share videos.

Flutter gives us a way of writing one code base for both iOS and Android, without having to duplicate the logic or the UI.
The advantage over solutions like Cordova is that it's optimized for mobile performance, giving native-like response. The advantage over the likes of React Native is that you can write the UI once, as it circumvents the OS native UI components entirely. Flutter also has a first rate development experience, including hot reload and debugging in VSCode, which is awesome.

Keeping things serverless has huge benefits for the time of development and scalability of the app. We can focus on our app instead of server devops. Firebase let's us sync data between clients without server side code, including offline syncing features (which are quite hard to implement). Flutter also has a set of firebase plugins that make it play nicely with Flutter widgets, so we get realtime syncing of the client UI when another client changes the data.

We'll use Publitio as our Media Asset Management API. Publitio will be responsible for hosting our files, delivering them to clients using it's CDN, thumbnail/cover image generation, transformations/cropping, and other video processing features.

By using an API for this, we can keep the app serverless (and therefore more easily scalable and maintainable), and not reinvent video processing in-house.

First, make sure you have a working flutter environment set up, using Flutter's Getting Started.

To check the project has created successfully, run flutter doctor, and see if there are any issues.

Now run the basic project using flutter run for a little sanity check (you can use an emulator or a real device, Android or iOS).

This is a good time to init a git repository and make the first commit.

In order to take a video using the device camera, we'll use the Image Picker plugin for Flutter.

In pubspec.yaml dependencies section, add the line (change to latest version of the plugin):

You might notice that there is also a Camera Plugin. I found this plugin to be quite unstable for now, and has serious video quality limitations on many android devices, as it supports only camera2 API.

For iOS, we'll have to add a camera and mic usage description in ios/Runner/Info.plist: 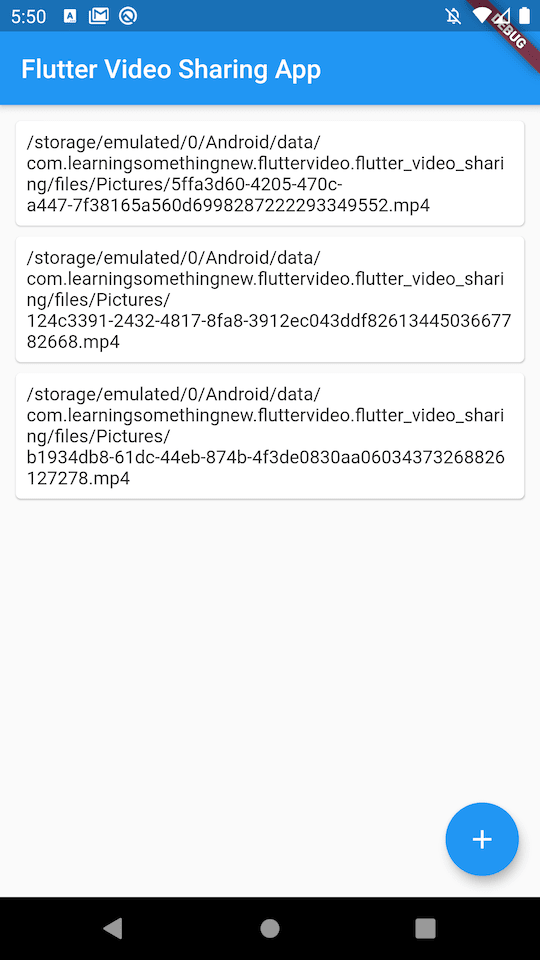 Create a free account at Publit.io, and get your credentials from the dashboard.

Note: The link above has my referral code. If my writing is valuable to you, you can support it by using this link. Of course, you can just create an account without me 😭

Add the flutter_publitio plugin to your pubspec.yaml dependencies section:

A good way to store app configuration is by using .env files, and loading them with flutter_dotenv, which in turn implements a guideline from The Twelve-Factor App. This file will contain our API key and secret, and therefore should not be committed to source-control.
So create an .env file in the project's root dir, and put your credentials in it:

Now add flutter_dotenv as a dependency, and also add the .env file as an asset in pubspec.yaml:

For iOS, the keys are loaded from Info.plist. In order to keep our configuration in our environment and not commit it into our repository, we'll load the keys from an xcconfig file:

Now we'll import this config file from ios/Flutter/Debug.xcconfig and ios/Flutter/Release.xcconfig by adding this line to the bottom of both of them:

Add Config.xcconfig to .gitignore so you don't have your keys in git

The last step is to add the config keys to ios/Runner/Info.plist:

In Android, all we have to do is change minSdkVersion from 16 to 19 in android/app/build.gradle.

Is it just me or is everything always simpler with Android?

Now that we have publitio added, let's upload the file we got from ImagePicker.

In main.dart, in the _MyHomePageState class, we'll add a field keeping the status of the upload:

Now we'll override initState and call an async function configurePublitio that will load the API keys:

We'll add the calling code to our _takeVideo function:

Notice that the response from publitio API will come as a key-value map, from which we're only saving the url_preview, which is the url for viewing the hosted video. We're saving that to our _videos collection, and returning _uploading to false after the upload is done.

And finally we'll change the floating action button to a spinner whenever _uploading is true:

One of the things publitio makes easy is server-side video thumbnail extraction. You can use it's URL transformation features to get a thumbnail of any size, but for this we'll use the default thumbnail that is received in the upload response.

Now that we want every list item to have a url and a thumbnail, it makes sense to extract a simple POCO class for each video entry. Create a new file lib/video_info.dart:

We'll change the _videos collection from String to VideoInfo:

And after getting the upload response, we'll add a VideoInfo object with the url and the thumbnail url:

And now we have nice thumbnails in the list: 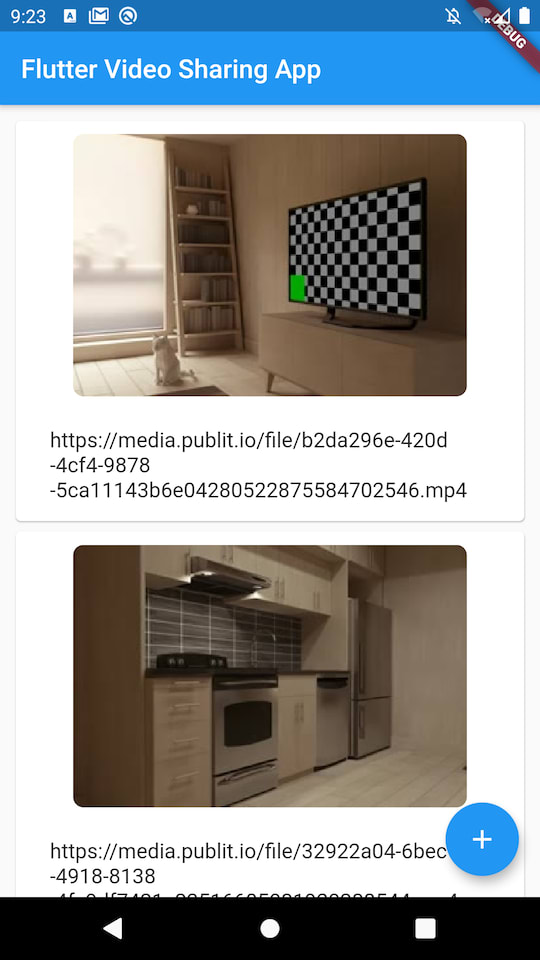 Now that we have the list of videos, we want to play each video when tapping on the list card.

We'll use the Chewie plugin as our player. Chewie wraps the video_player plugin with native looking UI for playing, skipping, and full screening.
It also supports auto rotating the video according to device orientation.
What it can't do (odly), is figure out the aspect ratio of the video automatically. So we'll get that from the publitio result.

Note: Flutter's video_player package doesn't yet support caching, so replaying the video will cause it to re-download. This should be solved soon: https://github.com/flutter/flutter/issues/28094

So add to pubspec.yaml:

For iOS, we'll also need to add to the following to Info.plist to allow loading remote videos:

A few things to note:

And now in main.dart, we'll first import our new chewie_player:

Add a calculation of aspectRatio:

Add a method to get the cover image from publitio API (this is just replacing the extension of the video to jpg - publitio does all the work):

And wrap our list item Card with a GestureDetector to respond to tapping on the card, and call Navigator.push that will route to our new ChewiePlayer widget:

Now that we can upload and playback videos, we want users of the app to view the videos other users posted. To do that (and keep the app serverless) we'll use Firebase.

First, setup Firebase as described here. This includes creating a firebase project, registering your mobile apps (Android and iOS) in the project, and configuring the credentials for both the Android and iOS projects. Then we'll add the Flutter packages firebase_core and cloud_firestore.

Cloud Firestore is the new version of the Firebase Realtime Database.
You'll probably need to set multiDexEnabled true in your build.gradle.

Save video info to Firebase

Instead of saving the video info to our own state, we'll save it to a new Firebase document in the videos collection:

The document() method will create a new randomly named document inside the videos collection.

This is how the documents look in the Firebase Console: 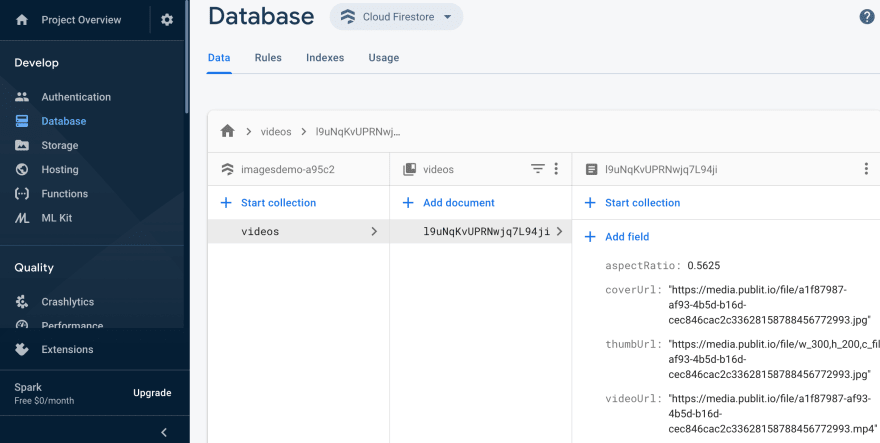 Now in our initState method we'll want to start a Firebase query that will listen to the videos collection. Whenever the Firebase SDK triggers a change in the data, it will invoke the updateVideos method, which will update our _videos state (and Flutter will rebuild the UI):

Now all the videos are shared!

Now that everything's working, it's a good time for some refactoring. This is a really small app, but still some obvious things stand out.
We have our data access and business logic all sitting in the same place - never a good idea. It's better to have our API/data access in separate modules, providing the business logic layer with the required services, while it can stay agnostic to (and Loosely Coupled from) the implementation details.

In order to keep this post short(ish) I won't include these changes here, but you can see them in the final code on GitHub

We can use FFMpeg to encode the video on the client before uploading.
This will save storage and make delivery faster, but will require a patient uploading user.
If you want to see how to do that, write a comment below.

Thanks for reading!
Full code can be found on GitHub.
If you have any questions, please leave a comment!

How To Fetch Nearby Places From Google Maps with Flutter?

Once suspended, johnnymakestuff will not be able to comment or publish posts until their suspension is removed.

Once unsuspended, johnnymakestuff will be able to comment and publish posts again.

Once unpublished, all posts by johnnymakestuff will become hidden and only accessible to themselves.

If johnnymakestuff is not suspended, they can still re-publish their posts from their dashboard.

Once unpublished, this post will become invisible to the public and only accessible to Jonathan P.