CrowdNotifier is a secure, decentralized system for notifiying individuals that have been in contact with SARS-CoV-2-positive people in public locations, such as bars, restaurants, venues and other places that can be considered potential sources of contagion.

This article aims to demistify this technology and explain how it works and how does it preserve the privacy of its users.

When visitors come into a location, they use an app implementing the CrowdNotifier system to scan a QR code provided by the location owner. When they leave, they check out tapping a notification left by the app on their phone.

If the Health Authority concludes the location has been visited by an infected person at a given point in time, other visitors who were there during the same overlapping timespan will be notified through the app.

The security, trust and privacy of the system rely on symmetric, asymmetric and IBE cryptography.

IMPORTANT! This article oversimplifies IBE by omitting some encryption/decryption and key derivation aspects to make it easier to understand. Cryptographers be warned.

Location owners need to generate two different QR codes: one for the entry (which is public) and another for the trace (which is private).

The entry code is placed at the entrance (or entrances) of the location and is the one scanned by visitors when they come in.

Both codes are generated offline (this means on the client side, without any party except the location owner knowing any secret key-generation material).

The generation process is as follows:

This is the part when it starts to get interesting!

The history of visited locations is stored only on the phone of its corresponding visitor and it keeps track of the past 10 days.

Even if the visitor's phone gets hacked no one can know were he/she has been as this information is both hashed and encrypted 🤯. The most an attacker can do is know someone has been in contact with a SARS-CoV-2-positive.

When visitors enter a location they scan the entry QR code to get all the data it contains, and when they leave, the phone app stores a record for each hour interval they have been at the place.

For example, if a visitor enters at 6:36 pm and leaves at 8:01 pm, inmediately after tapping the "leave" button on their phone, the CrowdNotifier app will generate three messages (6pm, 7pm and 8pm) containing the same information but encrypted with a different key for each hour. 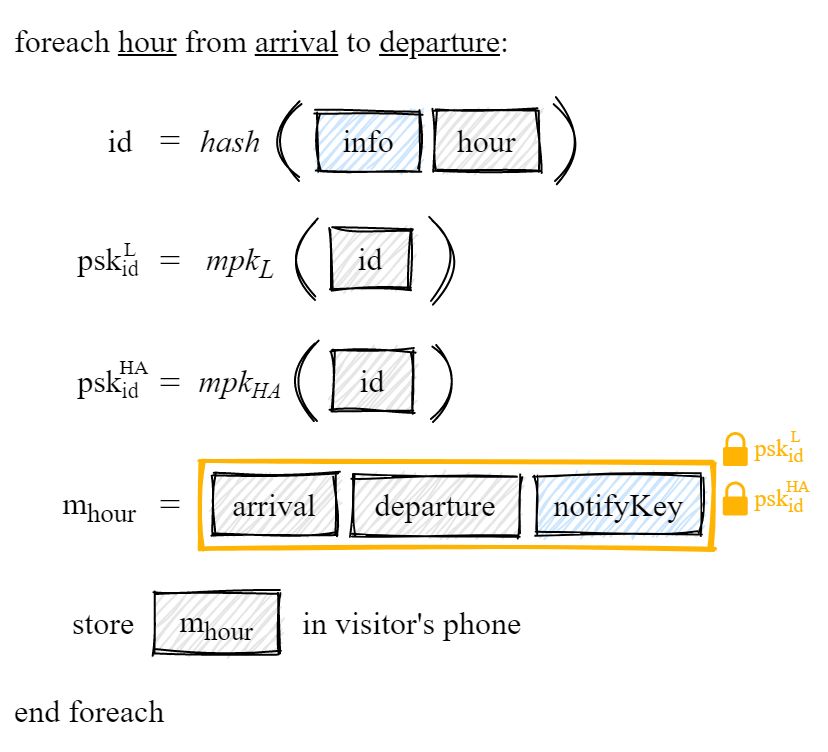 As you can see in the figure above, to generate a record we follow these steps:

When the Health Autority detects an infected person, it requests the Location owner the notifyKey, encrypted mskHA and the location PSKs for a given time interval, tipically from the arrival to the departure of the COVID-19 subject.

To obtain the requested information, the Location owner scans the trace QR code that has been kept private until this very moment and derives all location PSKs for the appropiate time interval using their MSK (mskL). 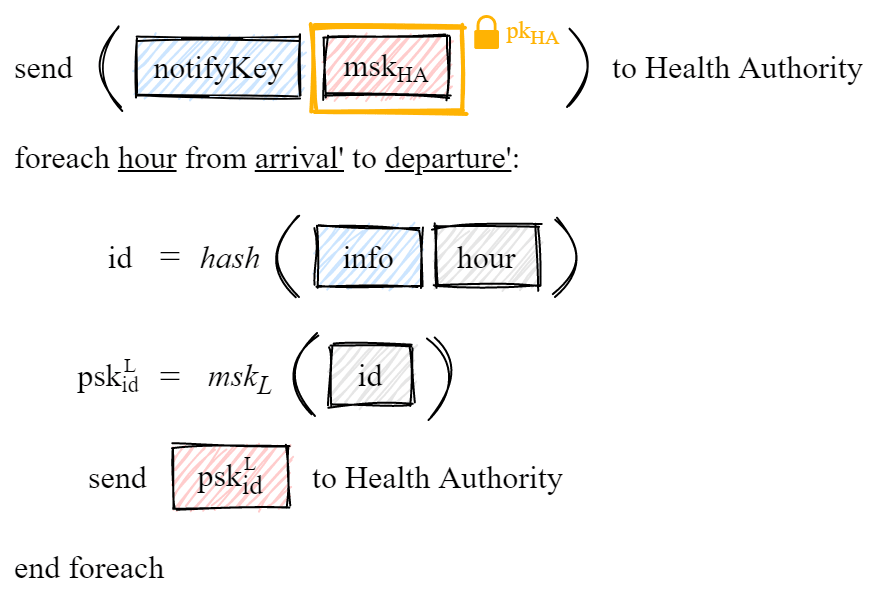 The Health Authority receives this information and verifies it. If it passes verification, a set of notification messages are generated and published to a public server (in most cases managed by the HA) where visitors' apps periodically connect to in order to check whether they have been in contact with an infected person. 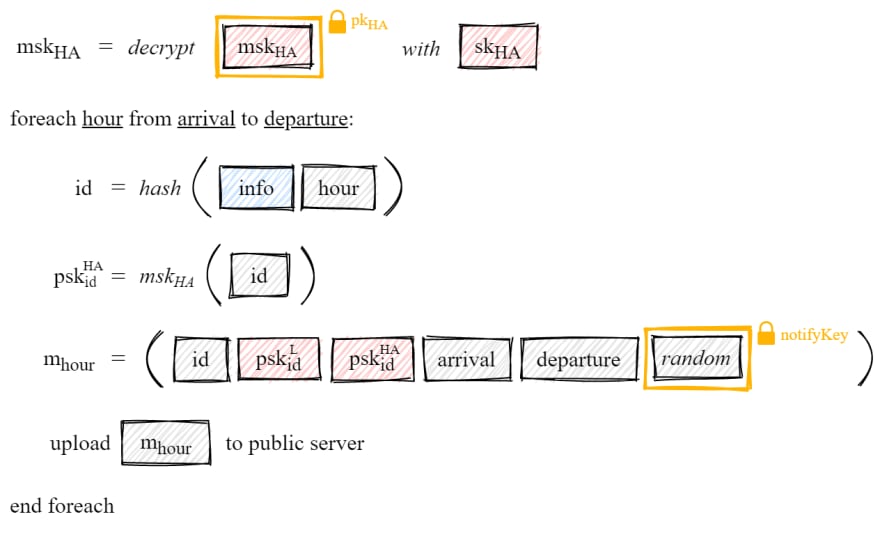 These notification messages contain both Partial Secret Keys as the two are needed to decrypt the messages stored in the visitors' phones.

Also, the notifyKey is not sent but instead is used to encrypt a random plaintext that is added to the notification.

This is the last step of the CrowdNotifier workflow.

After notification messages have been published to the public server, the smartphone app downloads them to check if the visitor has been in the same location at an overlapping time with a positive contact. 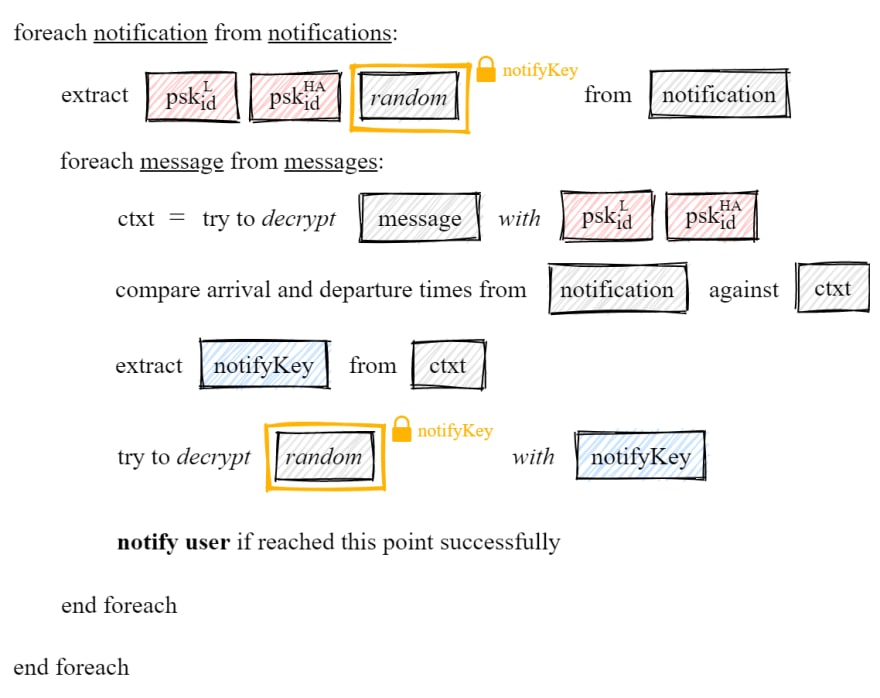 For every notification, the app extracts the PSKs and tries to decrypt every message stored in device that was previously recorded in Step 2.

If the time intervals overlap and the random value from the notification can be decrypted using the notifyKey obtained after decrypting the message, then an alert is shown to the user (visitor).

If the app cannot decrypt any stored message with any of the PSKs provided in the notification messages, then everything is fine: the user has not been in contact with an infected person.

And that's basically how CrowdNotifier works!

If you want to learn more or dig deeper into the cryptography behind this technology, check out the White Paper from their official Github repository.

How to secure sensitive endpoints using JWT in Node.js

Once suspended, josemmo will not be able to comment or publish posts until their suspension is removed.

Once unsuspended, josemmo will be able to comment and publish posts again.

Once unpublished, all posts by josemmo will become hidden and only accessible to themselves.

If josemmo is not suspended, they can still re-publish their posts from their dashboard.

Once unpublished, this post will become invisible to the public and only accessible to José Miguel Moreno.

Thanks for keeping DEV Community 👩‍💻👨‍💻 safe. Here is what you can do to flag josemmo:

Unflagging josemmo will restore default visibility to their posts.