The Web of Things aims to build the Internet of Things in a truly open, flexible, and scalable way, using the Web as its application layer. Empowering this idea, Mozilla has been making efforts towards a Web of Things standards, providing a gateway implementation along with libraries for the most common languages. In this blog post, we will go through the process of making a Web of Things device. 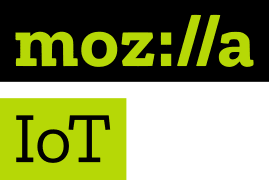 Before entering into the details of Web of Things1, one must present its origin, the Internet-of-Things. The Internet-of-Things can be seen as the result of the interconnection via the Internet of computing devices embedded in everyday objects, enabling them to send and receive data. This paradigm-shift provoked a ripple effect transforming everyday objects into smart objects, thus being widespread in terms of domains of application.

This paradigm-shift opened a window on new market opportunities that lead to several companies to create new products for these new markets, such as the smart-home. However, _despite utopian visions of seamless home automation, the smart home technology market, like every other, is fragmented _23. Several companies, institutions and other entities (including governmental ones) have been working on standards for assuring the interoperability and reducing the technological fragmentation of IoT.

Mozilla, as a defender of the mission of “keeping the internet open and accessible to all” and putting efforts on building a better Internet2 has embraced the Web of Things initiative and created Project Things 4. This project distinguishes itself from the other standardization initiatives due to the fact that it is built upon existing web standards such as HTTP, REST, JSON, WebSockets and TLS.

Project Things 4 is an experimental framework of software and services from Mozilla for connecting “things” to the web and will consist of three main components:

The goal of this project is to build a Web of Things device capable of sensing its surroundings by measuring temperature, humidity and sensing motion. Plus be able to show any information in an OLED screen and operating status in a LED.

After searching on Thingiverse we found out this cool 3D printed modular case for a NodeMCU ESP8266 microcontroller. Since it fits my goal of having multiple components, and, even, upgrade it with more components if needed, it was a go-go. 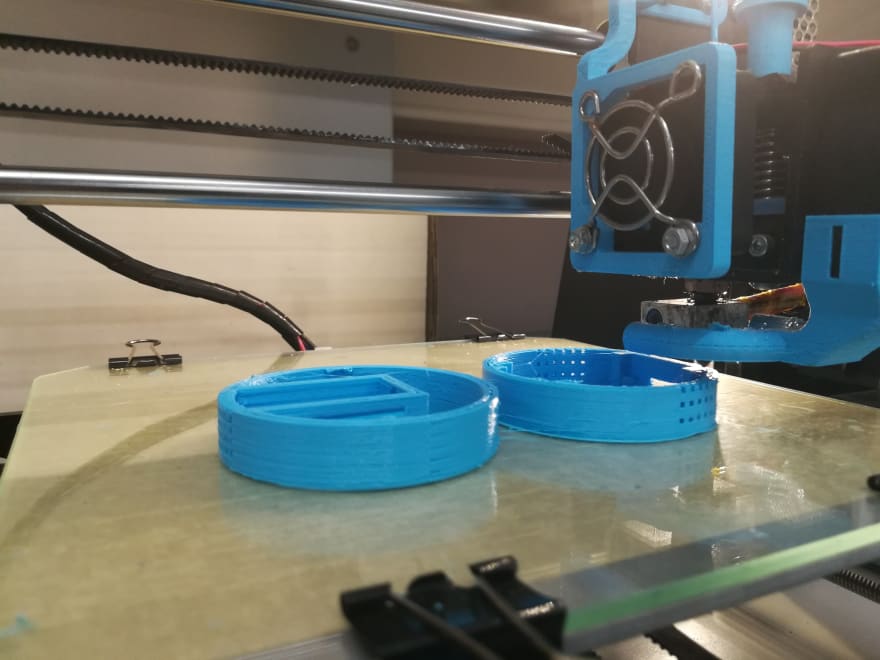 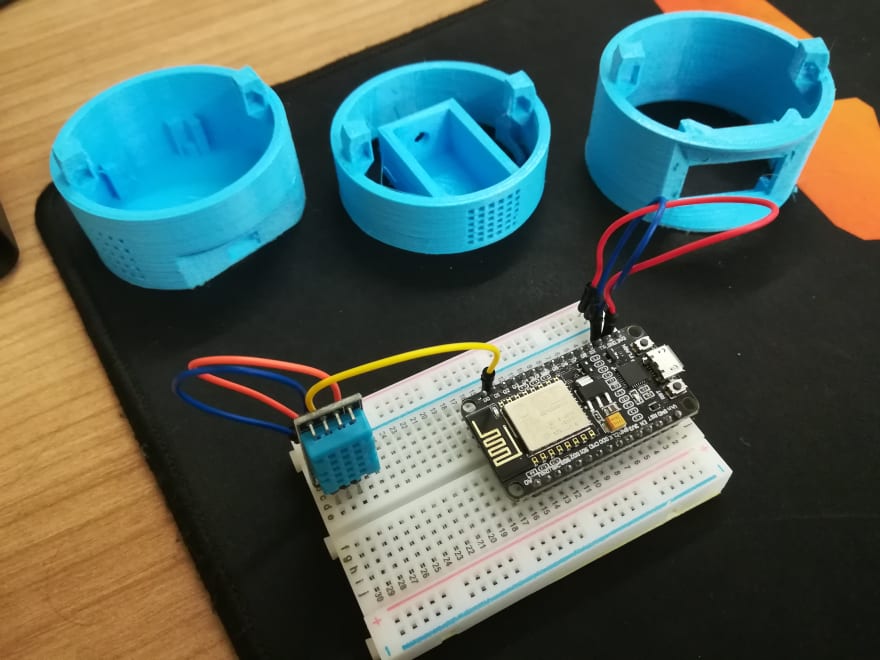 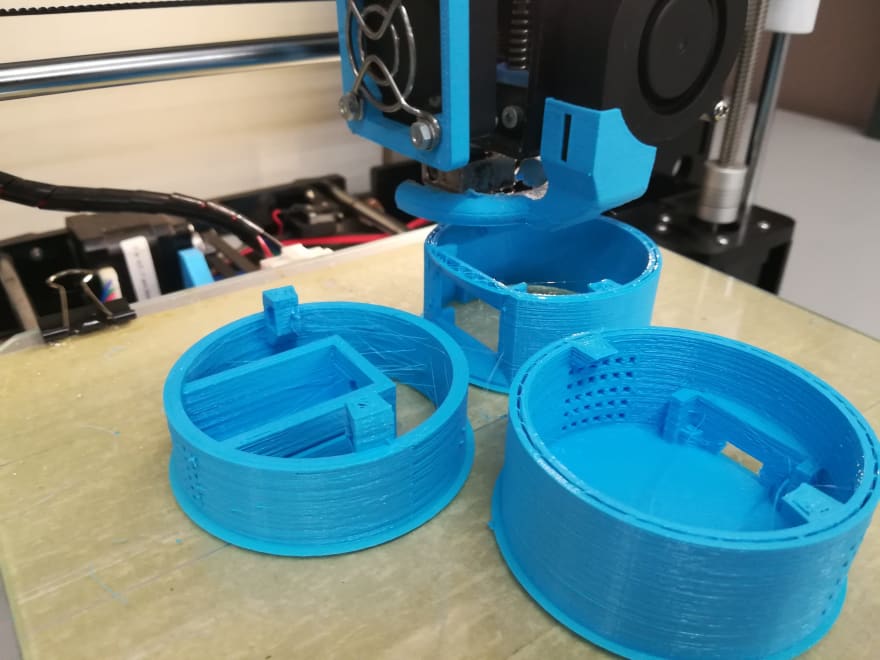 Some modifications were done to this models after printing for fitting a breadboard into the Base_NodeMCU. All the printing was done using an Anet A8 printer.

The NodeMCU board was picked up since it is cheap, has a built-in wireless shield and is compatible with almost any Arduino libraries and scripts.

All the parts were brought on eBay. You can easily find similar ones on Aliexpress, Amazon or any other hardware parts seller. 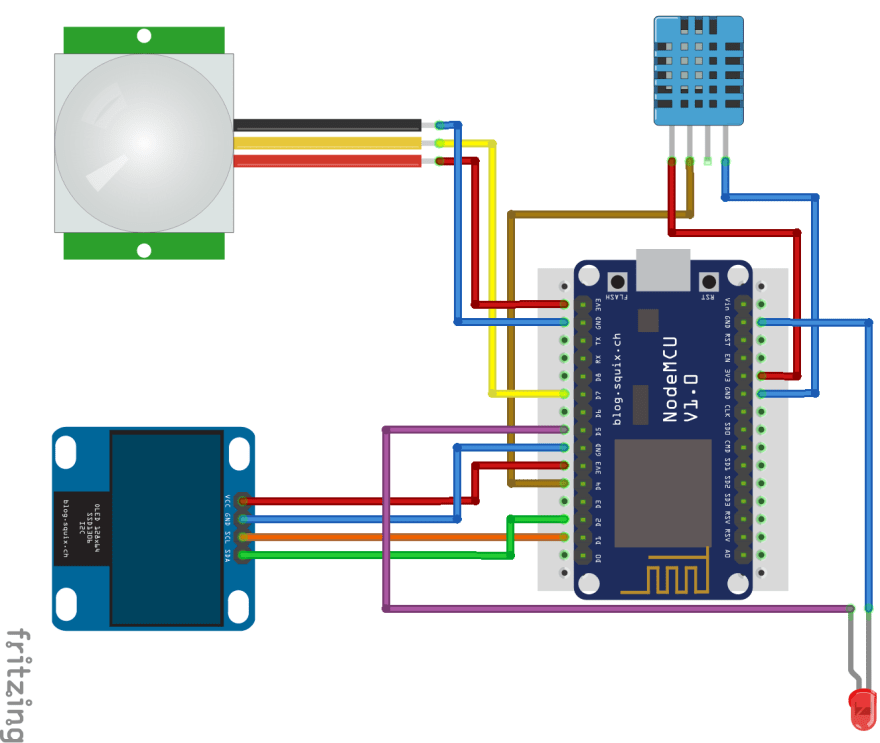 Using the Mozilla Things Framework is as easy as adding the webthing-arduino and ArduinoJson libraries to the PlatformIO project. Further, for starting a web server in the NodeMCU the ESP Async WebServer is used.

For the sake of simplicity for reading and writing data from and to the different parts several libs were used, namely:

After setting up the dependencies, let’s focus on the main.cpp.

Setting up the Internet connection

Using the lib ESP8266WiFi we can set up the Wireless.

Setting up the connection :

And we’re now connected to the local network.

From this point on we already have our thing being announced to the local network using mDNS6 and we can access the device on our browser using the address: http://indoorsensor.local. The result page presents a JSON (as defined by the Web Thing API) with information about all the devices (components) connected to our thing.

Adding components to our Adapter

This is an example of how to add the DHT sensor to the web thing. A similar process is needed for all the other parts.

Going through the code :

All the DHT sensors have the need of setting a delay between reads. The documentation mentions a time of approx. 2000 milliseconds between reads. However, the execution period of each loop is lower than that, and it is not guaranteed the exact execution time (can depend on the hardware and components). In order to assure that we just try to read data from the DHT with a given periodicity (above 2000 milis in the case of DHT), we need to keep track of time.

Using the lib TaskScheduler we can easily create tasks that are executed just at a given time. As an example we can see the following code:

The OLED screen uses I2C communication (reducing the number of pins used). We have a 4 pin connection, the VCC, GND, Serial Data Line (SDA) and Serial Clock Line (SCL)5. Using the Adafruit_SSD1306 for connecting to it, we need to know the hardware address to communicate with it. For finding it out we can use the I2C scanner (gist available here) to check all the pins.

In NodeMCU boards it is recommended to connect any I2C devices to pins D1 and D2 (as presented in the above circuit schematic).

Going through the code :

In our case, due to the screen used and printing details, we used our screen upside down, so we created a fork of the original Adafruit lib and added a void flip() function that redraws anything on the screen, making it readable in the right direction.

Since the motion sensor can be triggered at any time, we can not simply check for motion in the loop. For that purpose, we can use interrupts7. So, instead of using the common pinMode(PIR, INPUT);, we must use the INPUT_PULLUP flag. This allows us to hook a function when the value of the pin changes (flag CHANGE). Since we are working with a digital input, this means that the value changes from 0 to 1 when it senses motion and makes a call to the motionDetectedInterrupt function.

Our motionDetectedInterrupt function toggles the value of the global variable state when it senses motion, and, then, when it stops sensing it. Then we can easily read this state using the same approach that we used in the case of the DHT sensor, making the boolean data available by calling the respective endpoint.

All the code is available on GitHub. 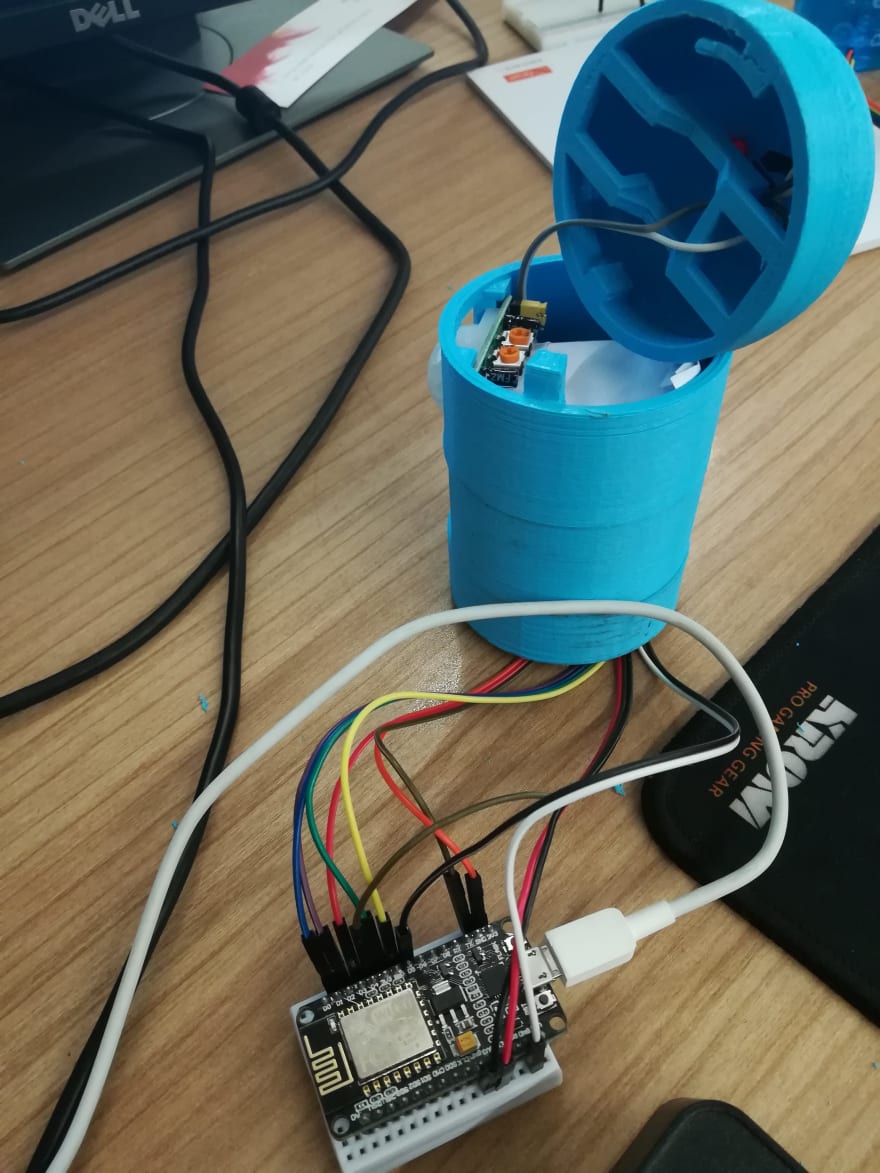 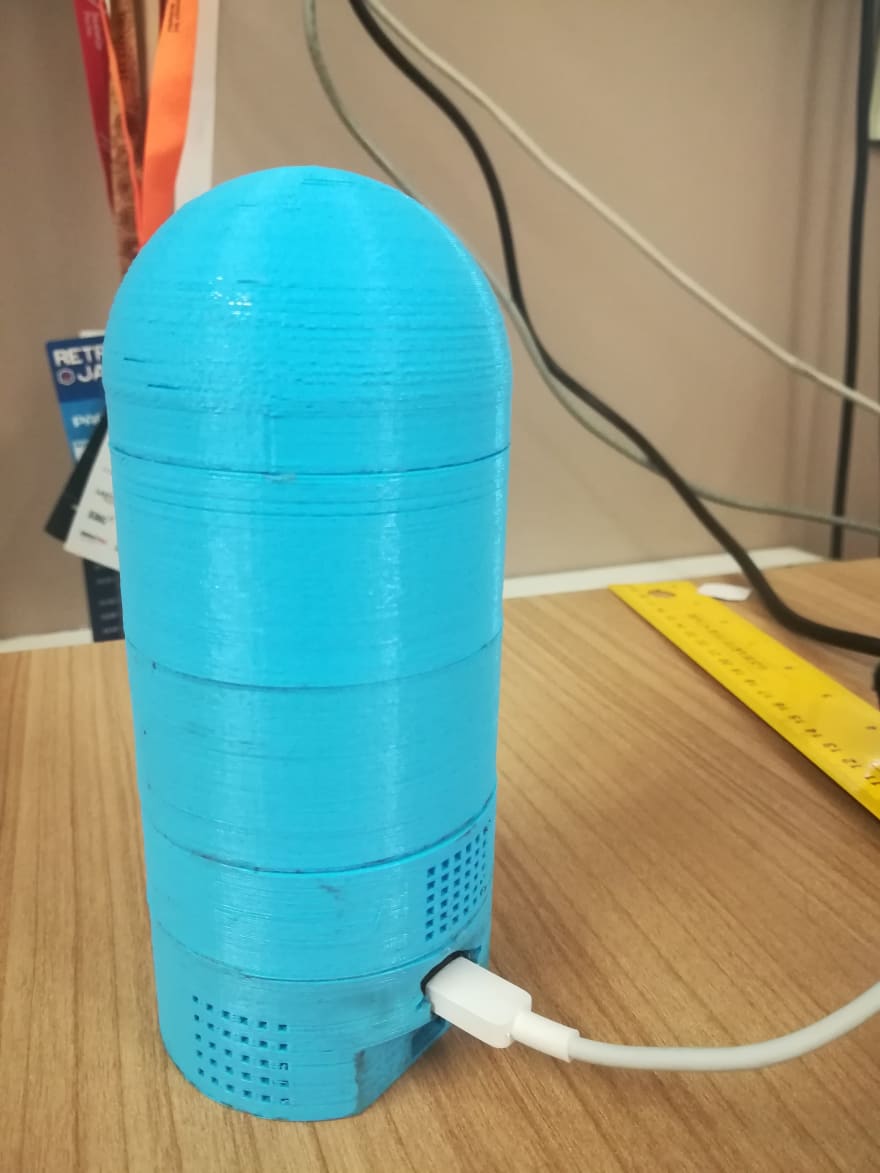 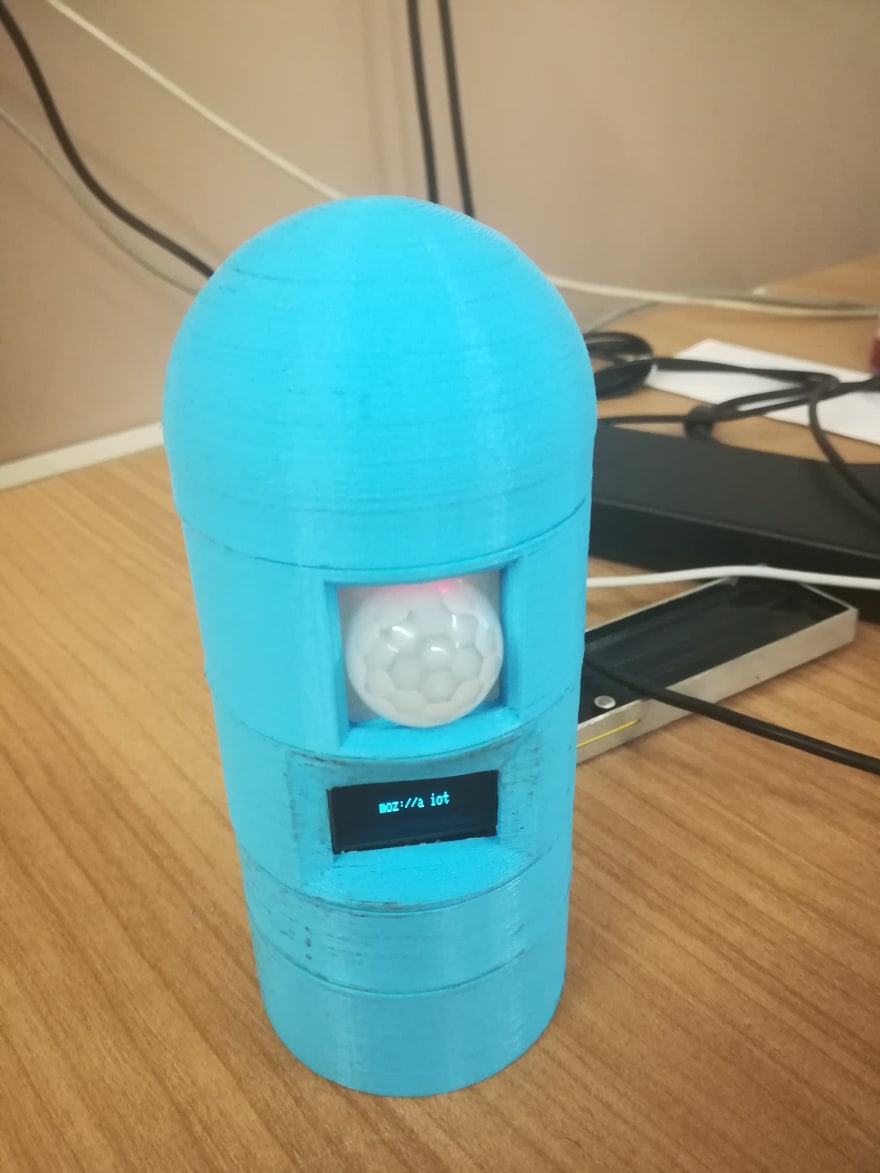 All the data is available by checking the respective href, and we know a priori the type of data. Further, we can leverage the API to have additional data like descriptions.

In a future post, we gonna talk about accessing the Indoor Sensing Hub data, storing it and, then, visualizing it. And, also, adding MQTT support to it.

Watch the birds on your backyard with a Raspberry Pi, Edge Impulse and balena

Once suspended, jpdias will not be able to comment or publish posts until their suspension is removed.

Once unsuspended, jpdias will be able to comment and publish posts again.

Once unpublished, all posts by jpdias will become hidden and only accessible to themselves.

If jpdias is not suspended, they can still re-publish their posts from their dashboard.

Once unpublished, this post will become invisible to the public and only accessible to JP Dias.

Thanks for keeping DEV Community 👩‍💻👨‍💻 safe. Here is what you can do to flag jpdias:

Unflagging jpdias will restore default visibility to their posts.